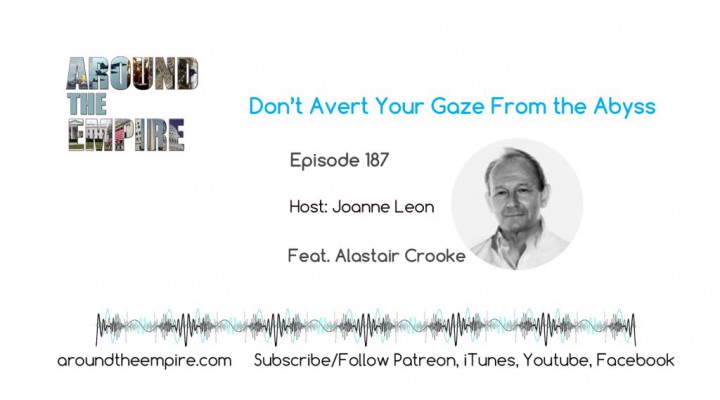 Guest: Alastair Crooke. In a recent article, Alastair said: “Theories of human ‘Progress’ as an upward-trending, linear continuum, inevitably leading to ‘a better human end’, though clothed today as technological ‘miracles’, were never empirical hypotheses. They were always concocted myths, answering to a human need for meaning, yet manipulated ruthlessly in the interests of power.” Alastair argues that these kinds of “struggles” have a long and bloody history. Politics in the United States in 2020 have been configured into a crusade against a “cosmic evil” and we seem to be barreling toward a major crisis from which we must not avert our gaze. We go into detail on these topics and Alastair offers an insider’s view of how we got to this point.

There is a bonus segment for patrons, Ep 187EXTRA: Underlying Political and Ideological Battles in 2020, about who the key players are in this epic battle, what their goals are and to what lengths they are willing to take all of this.

Alistair Crooke is a former British diplomat, the founder and director of the Conflicts Forum, a former ranking figure in both British intelligence (MI6) and European Union diplomacy. and he served as an advisor to the High Representative for Common Foreign and Security Policy of the European Union (CFSP) from 1997 to 2003. He was also a member of an international fact finding committee, the Mitchell Committee, which published the Mitchell Report in 2001 on the  causes of the Second Intifada. He is the author of the book Resistance: The Essence of the Islamist Revolution which offers strategic insights into the origins and logic of Islamist groups which have adopted military resistance as a tactic.