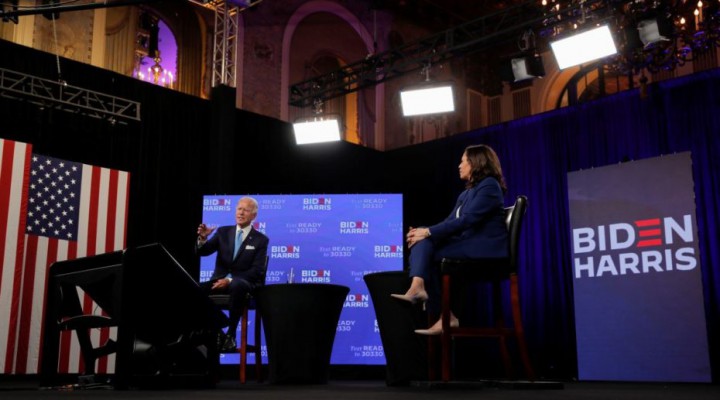 The choice of Vice-President, of course, is primarily about U.S. domestic needs. With BLM and wokeness pervasive in the western sphere, Joe Biden needed to, and committed himself to choosing a black woman, (Kamalla Harris is half Indian and Jamaican), since the support of black voters will be crucial in November. But equally importantly, Harris, a career prosecutor, is very aggressive in her speeches — and that’s what Biden needs: i.e. someone with sharp elbows.

She is ‘woke’ on social issues, yet has been notably zealous in incarcerating pot-smoking LA youths, and paradoxically, drew “very little black support in the primaries”. However, in this era of mass protest, Harris will plausibly gild Biden’s ticket –  as a Law and Order Vice-President. That counts. And the ‘woke’ contingent on Wall Street, they love her. That counts too.

But down to ‘brass tacks’: Does this tell us anything about Biden’s probable foreign policy, were he to prevail in November? Harris indeed has not adopted war and militarism as her platform –  however she hasn’t offered a major foreign policy speech, either. Nonetheless, hers, is no blank page –  she has very discernible stances.

Her ‘signature stance’ has been a strong commitment to Israel and to AIPAC: In March 2017, she told the AIPAC Policy Conference: “Let me be clear about what I believe: I stand with Israel –  because of our shared values, which are so fundamental to the founding of both our nations.” At the 2018 AIPAC conference, Harris gave an off-the-record speech in which she recounted how, “As a child, I never sold Girl Scout cookies, I went around with a JNFUSA (The Jewish National Fund) box, collecting funds to plant trees in Israel”. And her husband is Jewish. (She skipped the 2019 conference, along with several other Presidential candidates.)

Apart from unwavering support for Israel (which the more panglossian amongst us may see simply as the entry-price to office in the U.S.), Harris has been noted for bellicose rhetoric toward North Korea and Russia, and for her reluctance to co-sponsor legislation aimed at preventing war with Venezuela and North Korea. In short, on such military intervention issues, she’s in line with—and sometimes to the right of—a hawkish Democratic establishment.

‘Move along: Nothing to see here!’ might seem the appropriate riposte: She’s just ‘boilerplate’ Democrat. Maybe that’s right. But to focus on this would be to miss the wood for the trees –  for the foreign policy real action is happening almost unnoticed elsewhere.

“Never-Trumper Republicans have been worming their way into the Biden campaign, offering to flesh out his “coalition” ahead of the election and pushing their way into the foreign policy discussions, particularly on China. Given their shared history with liberal interventionists already in the campaign, don’t for a second think that there aren’t hungry neoconservatives among them trying to get a seat at the table.

“Some hawkish Democrats may see the neocons as convenient allies in preserving an outdated interventionist mindset,” offers Matt Duss, who is Sen. Bernie Sanders’ longtime foreign policy advisor, who maintains close ties with the Democratic campaign to replace President Trump. “And of course, neocons are desperate for any opportunity to salvage their own relevance.””

A Daily Beast report at the end of last month quoted unnamed “individuals who work for conservative think tanks in Washington” acknowledging that they were “informally speaking with members of the Biden team in recent weeks”.

Their focus is said to be on the ‘failing China trade deal’, and Trump’s supposedly ‘weak posture’. Reportedly, they are “so frustrated with the U.S-China trade deal, and the Administration’s efforts to hold Beijing accountable, that they are willing to offer counsel to the Democratic nominee”. And moreover, are proposing not just support to the Democratic candidate, but also to provide guidance on ways to formulate a tough economic posture toward Beijing, (in order to undermine Trump).

In a later update, the Daily Beast says that with the election less than 100 days away, some members of Trump’s own inner circle are pushing him too in the hawkish direction –  urging him to make a new bet: Rather than to put his chips on the trade deal, Trump would hit the electoral jackpot (they counsel) were he just to ‘blow it up’.

Four people knowledgeable about the issue told The Daily Beast that in the past three weeks, an internal campaign has intensified within the Trump administration to convince the president ‘to nuke’ the China trade deal.

The ‘back-story’ here is Biden’s campaign to expand its months of back-channel outreach to Republicans –  with the goal of hitting President Trump on his signature campaign issue: China.

Interviews with several of the most prominent NeverTrump Republicans reveal that for now, the nascent effort to mobilise a ‘Republicans for Biden’ movement –  alongside the extant Lincoln Project –  is loosely defined, and could ultimately take a variety of forms. Essentially, however, Team Biden is being pressed by the Republican strategists to ‘out-Hawk’ Trump on China policy by taking a tougher line than the President. In other words, the campaign is setting up to be about who will be tougher – and will be fought out on the President’s key platform.

Kelley Beaucar Vlahos opines that: “It’s hard to think that real hardline conservative hawks on China, like Steve Bannon and the folks at the Committee on the Present Danger: China [see here] are involved in the Biden collusion. Some of them are certainly neoconservative … They’d be pushing for cold –  if not hot –  war from Trump’s Right – [and therefore would] not be hedging bets with Biden”. Vlahos continues:

“No, it can only be the establishment Republican types, perched at places like Brookings and AEI, who now see some sort of opening on the D-team. But if they seem like the mushy end of the Right flank, think again. These guys are charter members of the Washington foreign policy consensus, mixed in with neoconservative NeverTrumpers, like Eliot Cohen and Robert Kagan (his wife Victoria Nuland was a top neo-con official in the Clinton State Department) and who have despised Trump from the beginning. They think his America First foreign policy is “deeply misguided” and leading the country to “crisis.””

Ah –  It is precisely here where the link back to the choice of Kamala Harris becomes more obvious. She is not likely to bring the Progressive Dems constituency to the Biden campaign (It would take Elizabeth Warren as VP to do that), and she has not had an impressive record of attracting the Black vote in LA. But, she would mesh-in seamlessly with the ‘Washington foreign policy consensus’, whilst still giving ‘the ticket’ a veneer of wokeness.

She thus could be an effective point person for NeverTrumper Republicans. This is a path down which Biden, it seems, is already embarked –  at least as far as China is concerned. On domestic issues – such as energy – Biden tilts more towards Sanders, and even Alexandria Ocasio-Cortez (the latter sits on his advisory panel).

And Biden – if elected in November – may not last (or, at least, not attempt a second term). In which case, Harris could theoretically be front-runner for 2024 Presidential contest. And here is the point: If there is one area where these neo-con entryists despise ‘policy weakness’ as much as they do on China, it is Iran. On that issue, Harris is clear. She is an unreserved Israeli partisan.

Anyone therefore hoping for a softening of U.S. policy towards Iran, should Biden win, may be pinning too much hope on Bernie Saunders or ‘The Squad’ being able to ‘round off the sharp edges from U.S. foreign policy stances’ –  they may be being overly-optimistic. It is just too obvious: As China veers towards Iran and the Middle East in search of energy-supply security, the temptation of any success with forcing a hawkish stance on China will be to link the two (Iran and China), and to try to push for a ‘kill-two-birds-with-one-stone’ policy stance.

Keep the eyes fixed on the neo-con ‘wolves’, not on Harris.