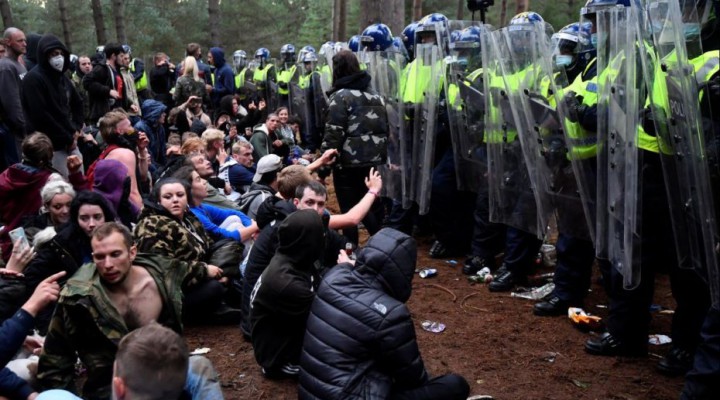 For a long time, the towns and cities of Europe (and the rest of the world) grew organically around the social, economic and political needs of the people. The result was the well-known, and much-loved, forms of ancient city, town and village, built from wood, brick or stone. This pattern remained unchanged for centuries. Then came two ‘World Wars’.

In their wake arose the initial, liberal-globalist push, and concomitantly, the bland, de-cultured “internationalist style” of architecture (the forerunner to today’s identity-and-gender-blurring politics). The two impulses were connected: They both arose out from the (understandable) ‘Never Again (war)’ popular sentiment.

Liberals from the 19th century onwards had thought that once the great European imperial regimes; once nationalism; once cultural ‘belonging’ were all erased, we would live peacefully together, and realise our destiny in a productive and utopian manner.

West European liberalism had become, as it were, both the world’s rhetorical – and literal – ‘currency’ (i.e. the dollar), and internationalist architecture assumed a sort of appropriate, universalist blandness and homogeneity that seemed to underwrite liberalism’s claims to human convergence and cosmopolitanism. It was, however, explicitly conceived as a tool to expunge culture – as a set of customs, a way of being, that is of value solely because it is its own – from the world.

Airports, the world over, looked the same. Hotels and city-centres became so ‘universal’ – that it was hard to recall in which city one was situated. Everywhere accepted the dollar. These were the ‘goods’ which a global currency and global ‘narrative’ brought with it. It gave a sense that the Enlightenment ‘ethos’ contained the germ of something truly universal.

Well, it was illusory – all that being globally anywhere, rather than somewhere, gave a false signal. It was not universalism at all – as it has turned out – but a momentary flaring of eurocentrism.

Today, with America’s soft power collapsed, and American society racked by internal fissures, not even the illusion of universalism can be sustained. Liberalism’s grimy ‘secret’ is exposed: Its core tenets were able to be projected as a universal project, only so long as it was underpinned by power. In J.S. Mill’s day, the civilisational claim served Europe’s need for colonial validation. And Mill tacitly acknowledged this when he validated the clearing of the indigenous American populations – as a category of non-productive populace.

Now, with liberalism widely understood as The God that Failed, other states are coming forward, offering themselves as separate, equally compelling ‘civilisational’ states. They reject the western nation-state model. And as civilization-states, they are organized around culture rather than politics. Linked to a civilization, the state has the paramount task of protecting a specific cultural tradition. Its reach encompasses all the regions where that culture is dominant.

What is the point here? Many things which had seemed solid, and separate, were in fact, all interlinked through universalism (held together through the great illusion): the Dollar, the ‘Davos’ Great Reset, the monetary system – and yes – even our ghastly contemporary architecture and interior design – all exhibits of a de-cultured world.

The salient point is that western liberalism now is non-fungible (appropriate only to certain states in America and to some European circles). A powerful centrifugal dynamic is at work. And liberalism’s loss of its pillar of power (U.S. power), and consequently its fungibility, leaves Europe naked.

Digital currencies simply will accelerate the centrifugal force – splitting apart our familiar currencies and monetary systems. The Fed is examining a digital currency; China has a Central Bank digital currency (CBDC), and Russia, Iran, the UK and Italy are amongst those planning their own CBDCs. ‘Davos’, of course, too wants digital for their explicitly illiberal technocracy project.

At a gathering of France’s ambassadors last year, President Macron mused that China, Russia and India were not merely economic rivals but “genuine civilisation states … which have not just disrupted our international order; and assumed a key role in the economic order, but they also have very forcefully reshaped the political order, and the political thinking that goes with it, with a great deal more inspiration than we have”.

Warning his audience that, “We know that civilisations are disappearing; countries as well. Europe will disappear”, Macron lauded the civilisational projects of Russia and Hungary, which “have a cultural, civilisational vitality that is inspiring”, and declared that France’s mission – its historic destiny – was to guide Europe into a civilisational renewal, forging a “collective narrative and a collective imagination. That is why I believe very deeply that this is our project, and must be undertaken as a project of European civilisation”.

The ‘old liberal illusion’ cannot be extended – not just because U.S. power is eroding, but rather, because its core values are being radicalised, stood on their head, and turned into the swords with which to impale classic American and European liberals (and U.S. Christian Conservatives). It is now the younger generation of American woke liberals who are asserting vociferously not merely that the old liberal paradigm is illusory, but that it was never more than ‘a cover’ hiding oppression – whether domestic, or colonial, racist or imperial; a moral stain that only redemption can cleanse.

In a way, these woke generations are paraphrasing Samuel Huntington, who writing in his Clash of Civilizations, asserted that “the concept of a universal civilization helps justify Western cultural dominance of other societies and the need for those societies to ape Western practices and institutions.” Universalism is the ideology of the West for confronting other cultures. Naturally, everyone outside the West, Huntington argued, should see the idea of one world as a threat.

With the ‘great illusion exploded’, and nothing substantive to put in its place, a new European Order cannot coherently be formulated. Macron however, is trying to rally Europe for the coming ‘age of empires’. Yet, it is not viable now for Europe any longer to trade off America’s post-war construct: America’s post-war imperium was under-girded by military and financial power. But Europe deliberately eschewed hard power, seeking instead a ‘new liberal imperialism’ (in Robert Cooper’s analysis).

The European project once may have sheltered under the wing of U.S. hard-power as an adjunct to America’s civilization mission, but that too is over: Trump has called Europe an enemy of America, on a par with China. The U.S. is no more Europe’s benevolent ‘uncle’ to deploy its hard power whenever Europe gets in a tangle.

And simply to speak of a European claim to universal values (tolerance, freedom of lifestyle, human rights, etc.,) essentially is to stand for the negation of the civilization-state, as Huntington argued. These values affirm rather, the freedom to experiment with different ways of life that will surely run counter to the grain of old tapestries of moral narratives and cultural practice that underwrites the course of human life experienced within a living community.

For example, the Chinese expressly prioritise Confucian values, and an emphasis on stability and social harmony over western ‘liberty’ and individual autonomy.

These ‘Euro-values’ as such offer no definition for the ‘good’ of the community, which almost every civilisational-state does do. They may be seen loosely to serve as an operating system, but liberalism in its (admittedly distorted contemporary form) does not amount to a civilisational system. At most, it has become a menu of lifestyle options to be juxtaposed against non-western lifestyles and choices.

Macron tells Europeans to root their belonging in the Enlightenment – yet as Portugal’s former foreign minister Bruno Macaes observed in a recent essay, it is precisely the global aspirations of liberalism that have severed the West, and Europe particularly, from its own cultural roots.

Unlike other European states (such as Russia), Macron inserts a glass ceiling to its prospective cultural ‘reach-back’: Why should it be limited to the Enlightenment? Why expunge the early Renaissance? Why does Europe extol so much the Frankish Charlemagne, and decline to reach back further? There were European values well before the Franks mounted their ‘cultural war’ to systematically expunge Europe’s old values. To limit the search to the Enlightenment is no reach-back at all.

No, the European leadership is so severed from Europe’s earlier cultural traditions that these are almost certainly irrecoverable. Political leaders do not appear to have answers to the dilemma posed by Macron of the rise of the civilisational-states (other than rallying to a European imperium stripped down to some soft-totalitarian technocracy à la Davos). Indeed, they do not even seem to realise – even now – the wider ramifications to universal liberalism’s implosion down to a few scattered ‘islands’ of adherents amidst a sovereigntist background.

Does Europe exist now as a coherent, bounded entity? Neither the Greeks nor sixteenth-century Europeans regarded themselves as ‘western’, a term which dates back only to the late eighteenth century. There was no such ‘thing’ as humankind in the ancient world: There were Assyrians, Greeks, Egyptians, Persians and so on, but no ‘humanity’ until – guess when – the Enlightenment, of course.

“Western societies have sacrificed their specific cultures for the sake of a universal project”, Macaes notes. “One can no longer find the old tapestry of traditions and customs or a vision of the good life in these societies”. Our naive faith that liberalism, derived from the political and cultural traditions of Northern Europe, would conquer the world has now been shattered for good. Instead, it is the defiantly non-liberal civilisation-states of Eurasia that threaten to swallow us whole.

Where then does that leave Europe, and what are we to do with liberalism? “Now that we have sacrificed our own cultural traditions to create a universal framework for the whole planet,” Macaes asks, “are we now supposed to be the only ones to adopt it?”.

0 thoughts on “The Dissolution of Liberal Universalism”