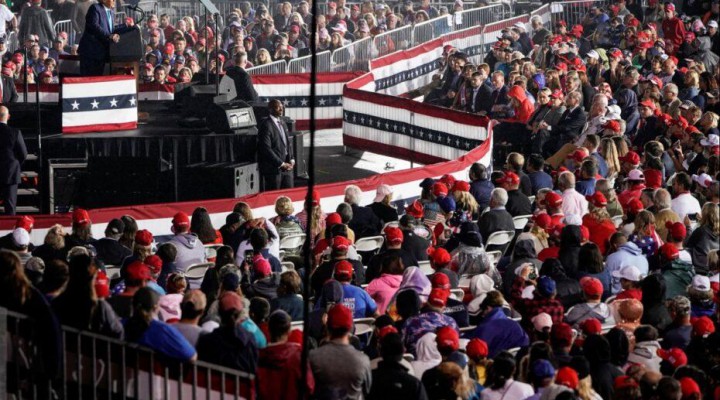 Trump’s crusade against voting by mail may prove to be a strategically sound expression of his plan for the Interregnum.

President Trump, this Thursday, was again asked to commit to a peaceful transfer of power. He declined again, and instead pointed to the issue of ballots being a mess (a reference to ‘mail-in’ ballots). Earlier, he had predicted that the U.S. Supreme Court would decide the outcome of the November election, and insisted that the Senate should confirm his Court nominee without delay, to break any potential electoral tie: “I think [the election] will end up in the Supreme Court; and I think it’s very important to have nine justices … this scam that the Democrats are pulling, it’s a scam, this scam will be before the United States Supreme Court”, the President added.

It is clear that the President intends to fight, and fight hard. It’s plain that the opposition intends that too. One prominent CNN anchor, Don Lemon, riposted: “We’re going to have to blow up the entire system”. “You know what we’re going to have to do? … You’re going to have to get rid of the electoral college,” Lemon continued. “Because the minority in this country get to decide who our judges are; and who our president is. Is that fair?”. Lemon was not alone. He joined a chorus of pundits who were in melt-down mode over the weekend, including Reza Aslan, himself a disgraced former CNN host, who earlier tweeted “If they even TRY to replace RBG we burn the entire f**king thing down”.

Both sides are now imagining a clash, and the violence to come – and not only imagining it; the public are buying weapons furiously. The pre-requisites for conflict thus are in place. Each imagines the other as darkly threatening to their way-of-life (i.e. the catch-phrase: ‘your utopia: my dystopia’), and each views the opposition as the alien ‘other’. Moreover, the Constitution is being construed as something de facto illegitimate, if it somehow allows the President to act in this way. Over the last several years there has been this accretive build-up to the ‘Big Clash’, the most awaited event ‘to be’, in American life. And it is now at hand.

The danger is not just that the Big Clash will bring discord. Those who fear something much worse take impasse and discord for granted. But rather, they foresee such a perfect storm of angry complaints bearing down heavily on the nation’s creaky electoral machinery – and worry that it may crack open, under the myriad pressures.

Anything is possible, including a landslide that leaves no doubt on Election Night. But even if one side takes a commanding early lead, tabulation and litigation of the “overtime count” (millions of mail-in and provisional ballots) could keep the outcome unsettled for days or weeks.

What is at stake here is not the suspicion that Trump might obstinately refuse to budge from the White House – were he to lose the election – but rather, that Trump could use that same ‘creaking electoral machinery’ precisely to prevent the formation of any consensus about the election outcome, in the wake of widespread electoral ballot controversy. He will not, in any event, readily concede: “The only way they can take this election away from us is, if this is a rigged election,” Trump said at the Republican National Convention.

Trump once tweeted: “Mail-in voting will lead to massive fraud and abuse. It will also lead to the end of our great Republican party. We can never let this tragedy befall our nation.” Another day, he tweeted: “Rigged 2020 election: Millions of mail-in ballots will be printed by foreign countries, and others. it will be the scandal of our times!” Democrats, he said on Fox & Friends at the end of March, want “levels of voting that, if you ever agreed to it, you’d never have a Republican elected in this country again”.

But Trump’s crusade against voting by mail may prove to be a strategically sound expression of his plan for the Interregnum, Barton Gellman writes in the Atlantic Magazine. The president is not actually trying to prevent mail-in balloting altogether, which he has no means to do. He is discrediting the practice, and preparing the ground for post–Election Night plans to contest the mail-in results:

“There are results that come in Election Night,” a legal adviser to Trump’s national campaign, [told The Atlantic]: “There’s an expectation in the country that there will be winners and losers called. If the Election Night results get changed because of the [mail-in] ballots counted after Election Day, you have the basic ingredients for a sh*tstorm.”

There is no “if” about it, I said. The count is bound to change. “Yeah,” the adviser agreed, and canvassing will produce more votes for Biden than for Trump. Democrats will insist on dragging out the canvass for as long as it takes to count every vote. The resulting conflict, the adviser said, will be on their heads.

“They are asking for it,” he said. “They’re trying to maximize their electoral turnout, and they think there are no downsides to that.” He added, “There will be a count on Election Night, that count will shift over time, and the results when the final count is given will be challenged as being inaccurate, fraudulent—pick your word.”

But, this is where constitutional ambiguities are salient – and can come into play: With every day that passes after 3 November, the president and his allies can hammer home the message that the legitimate tabulation is over, and that the Democrats are refusing to honor the results. In July Trump tweeted: “Must know Election results on the night of the Election, not days, months, or even years later!”

“An important thing to know about the Interregnum is that there is no umpire—no singular authority who can decide … The interregnum allots 35 days for the count, and its attendant lawsuits to be resolved. On the 36th day, December 8, an important deadline arrives.

At this stage, the actual tabulation of the vote becomes less salient to the outcome. That sounds as though it can’t be right, but it is: The combatants, especially Trump, will now shift their attention to the appointment of presidential College Electors.

December 8 is known as the “safe harbour” deadline for appointing the 538 men and women who make up the Electoral College. The electors do not meet until six days later, but each state must appoint them by the safe-harbour date, to guarantee that Congress will accept their credentials. The controlling statute says that if “any controversy or contest” remains after that, then Congress will decide which electors, if any, may cast the state’s ballots for President.

We are accustomed to choosing [College] electors by popular vote, but nothing in the Constitution says it has to be that way. Article II provides that each state shall appoint electors “in such Manner as the Legislature thereof, may direct”…

Trump may test this in battleground states where Republicans hold the legislative majority. The longer Trump succeeds in keeping the vote count in doubt, the more pressure [state] legislators will feel to act before the safe-harbour deadline expires.

The Trump-campaign legal adviser I spoke with told me the push to appoint [state] electors would be framed in terms of protecting the people’s will. Once committed to the position that the overtime count has been rigged, the adviser said, state lawmakers will want to judge for themselves what the voters intended. “The state legislatures will say, ‘All right, we’ve been given this constitutional power. We don’t think the results of our own state are accurate, so here’s our slate of electors that we think properly reflect the results of our state’ ”, the adviser said. Democrats, he added, have exposed themselves to this stratagem by creating the conditions for a lengthy overtime.

The Electoral College would convene on December 14 without a consensus on who had legitimate claims to cast the deciding votes. Rival slates of electors could cast the same electoral votes on opposite sides. Each slate would transmit its ballots, as the Constitution provides, “to the seat of the government of the United States, directed to the President of the Senate.” The next move would belong to Vice President Mike Pence.

Pence, as president of the Senate, would hold in his hands two conflicting electoral certificates from each of several swing states. The Twelfth Amendment says only this, about what happens next: “The President of the Senate shall, in the presence of the Senate and the House of Representatives, open all the certificates, and the votes shall then be counted.” [If, however, less than 270 Electoral delegates committed to one candidate were not to be certified by 20 January, then the Presidency will be chosen by vote in Congress – Amendment 20 section III]

The Trump team could take the position that the constitutional language leaves those questions to the vice president. This means that Pence has the unilateral power to announce his own re-election, and a second term for Trump.”

Then the contest, surely, will descend into the streets for resolution. The Electoral College will stand discredited, and the Constitution too – the creaky mechanism for transitioning power in the U.S. will lie broken, amidst the debris of contested mail-in ballots and an election in shambles.