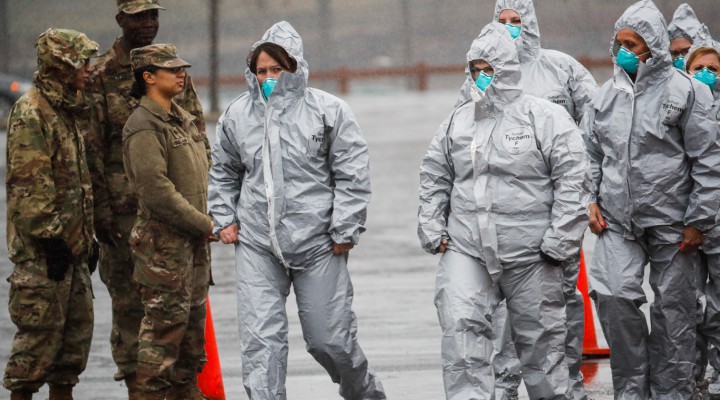 As coronavirus panic grips the world, concern over government overreach is growing given the involvement of US intelligence agencies in classified meetings for planning the U.S.’ coronavirus response.

MPN– As the COVID-19 coronavirus crisis comes to dominate headlines, little media attention has been given to the federal government’s decision to classify top-level meetings on domestic coronavirus response and lean heavily “behind the scenes” on U.S. intelligence and the Pentagon in planning for an allegedly imminent explosion of cases.

The classification of coronavirus planning meetings was first covered by Reuters, which noted that the decision to classify was “an unusual step that has restricted information and hampered the U.S. government’s response to the contagion.” Reuters further noted that the Secretary of the Department of Health and Human Services (HHS), Alex Azar, and his chief of staff had “resisted” the classification order, which was made in mid-January by the National Security Council (NSC), led by Robert O’Brien — a longtime friend and colleague of his predecessor John Bolton.

Following this order, HHS officials with the appropriate security clearances held meetings on coronavirus response at the department’s Sensitive Compartmentalized Information Facility (SCIF), which are facilities “usually reserved for intelligence and military operations” and — in HHS’ case — for responses to “biowarfare or chemical attacks.” Several officials who spoke to Reuters noted that the classification decision prevented key experts from participating in meetings and slowed down the ability of HHS and the agencies it oversees, including the Centers for Disease Control and Prevention (CDC), to respond to the crisis by limiting participation and information sharing.

It has since been speculated that the decision was made to prevent potential leaks of information by stifling participation and that aspects of the planned response would cause controversy if made public, especially given that the decision to classify government meetings on coronavirus response negatively impacted HHS’ ability to respond to the crisis.

After the classification decision was made public, a subsequent report in Politico revealed that not only is the National Security Council managing the federal government’s overall response but that they are doing so in close coordination with the U.S. intelligence community and the U.S. military. It states specifically that “NSC officials have been coordinating behind the scenes with the intelligence and defense communities to gauge the threat and prepare for the possibility that the U.S. government will have to respond to much bigger numbers—and soon.”

Little attention was given to the fact that the response to this apparently imminent jump in cases was being coordinated largely between elements of the national security state (i.e. the NSC, Pentagon, and intelligence), as opposed to civilian agencies or those focused on public health issues, and in a classified manner.

The Politico article also noted that the intelligence community is set to play a “key role” in a pandemic situation, but did not specify what the role would specifically entail. However, it did note that intelligence agencies would “almost certainly see an opportunity to exploit the crisis” given that international “epicenters of coronavirus [are] in high-priority counterintelligence targets like China and Iran.” It further added, citing former intelligence officials, that efforts would be made to recruit new human sources in those countries.

Politico cited the official explanation for intelligence’s interest in “exploiting the crisis” as merely being aimed at determining accurate statistics of coronavirus cases in “closed societies,” i.e. nations that do not readily cooperate or share intelligence with the U.S. government. Yet, Politico fails to note that Iran has long been targeted for CIA-driven U.S. regime change, specifically under the Trump administration, and that China had been fingered as the top threat to U.S. global hegemony by military officials well before the coronavirus outbreak.

The decision to classify government coronavirus preparations in mid-January, followed by the decision to coordinate the domestic response with the military and with intelligence deserves considerable scrutiny, particularly given that at least one federal agency, Customs and Border Patrol (CBP), will be given broad, sweeping powers and will work closely with unspecified intelligence “partners” as part of its response to a pandemics like COVID-19.

The CBP’s pandemic response document, obtained by The Nation, reveals that the CBP’s pandemic directive “allows the agency to actively surveil and detain individuals suspected of carrying the illness indefinitely.” The Nation further notes that the plan was drafted during the George W. Bush administration, but is the agency’s most recent pandemic response plan and remains in effect.

Though only CBP’s pandemic response plan has now been made public, those of other agencies are likely to be similar, particularly on their emphasis on surveillance, given past precedent following the September 11 attacks and other times of national panic. Notably, several recent media reports have likened coronavirus to 9/11 and broached the possibility of a “9/11-like” response to coronavirus, suggestions that should concern critics of the post-9/11 “Patriot Act” and other controversial laws, executive orders and policies that followed.

While the plans of the federal government remain classified, recent reports have revealed that the military and intelligence communities — now working with the NSC to develop the government’s coronavirus response — have anticipated a massive explosion in cases for weeks. U.S. military intelligence came to the conclusion over a month ago that coronavirus cases would reach “pandemic proportions” domestically by the end of March. That military intelligence agency, known as the National Center for Medical Intelligence (NCMI), coordinates closely with the National Security Agency (NSA) to conduct “medical SIGINT [signals intelligence].”

The coming government response, the agencies largely responsible for crafting it and its classified nature deserve public scrutiny now, particularly given the federal government’s tendency to not let “a serious crisis to go to waste,” as former President Obama’s then-chief of staff Rahm Emanuel infamously said during the 2008 financial crisis. Indeed, during a time of panic — over a pandemic and over a simultaneous major economic downturn — concern over government overreach is warranted, particularly now given the involvement of intelligence agencies and the classification of planning for an explosion of domestic cases that the government believes is only weeks away.

Feature photo | A Medical University of South Carolina public safety officer walks by the hospital’s drive-through tent for patients who are being tested for the COVID-19 coronavirus at the Citadel Mall parking lot, March 13, 2020, in Charleston, S.C. Mic Smith | AP