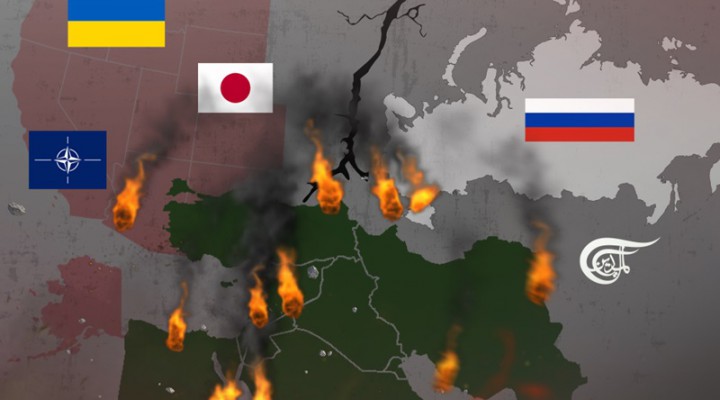 It is understandable for Middle Eastern states to stay aloof, as ‘bystanders’, but that does not mean that they will avoid becoming ‘road kill’ in this Euro-collision. They will.

Berlusconi wrote in Il Giornale this week that the West is isolated – consequent upon its’ Ukraine monomania: “The West’s response [to Ukraine] was unanimous – but what do we mean by the West? The USA, Europe and some countries in the Pacific region that have traditional ties with the USA, among them Australia and Japan. And from other countries of the world?  Almost nothing”.

Precisely so. Ukraine is an intra-European struggle over identity that reaches back to the Fall of Rome.

It is understandable for Middle Eastern states to stay aloof, as ‘bystanders’, but that does not mean that they will avoid becoming ‘road kill’ in this Euro-collision. They will.

In essence, in their rage to hurt Russia, the western Establishment has capsized the delicate balances underpinning the globalist financial structure. Impulsively and unreflectively, they ‘liberated’ commodities – from food, to energy to rare elements – to soar in value, as ‘something’ again seen to possess inherent value of their own.

Instead of being the suppressed collateral base to a fat-tail pyramid of fiat currency-valued ‘assets’ that inflation eats each year, commodities, not fiat dollars or euros, are becoming prized as the currency to which the ‘bystander world’ is attracted, as an alternative pathway to trading.

Of course, it is not ‘just Ukraine’ alone which is at the root of this. Two other key factors are playing a part: First, the ‘Krugman economics’ notion that governments should ‘print to spend’. ‘Going Big’ on government spending had already triggered inflation (pre-Ukraine), and presently is shaking confidence in depreciating fiat currencies – which lack any handhold in value.

The second is the western élite’s adherence to a ‘global transition’ (i.e. headlong rush away) from fossil fuels. Why? Because on hearing statements that are unremittingly absolute, such as: ‘the science is settled’, you become aware that you are dealing with a cult, not science. Framed in absolute terms, it brooks no other science or broader perspective that may qualify the meta-narrative.

Yet, if this was not enough fire lit beneath commodity price pots, Europe then surpassed itself by advocating banning Russian energy purchases — thus turning-up the flame further, setting the pots, literally, to boil over.  Prices soared as Europeans will pay more for substitute energy supplies, even if a fuller ban proved impossible to implement.

Okay — it is one thing for Europe and the US to say that the inflation that will ensue; the industrial contraction that will result; the food emergency that will be aggravated; and the hunger pains that will extend across society, is worth it.

That ‘reaffirming the Liberal Order, by saving Ukraine’ – albeit through risking the economic collapse of Europe – is fully validated by humiliating Putin at any price. But why should the Middle East states that are not commodity producers pay the extreme price for Europe’s vanity too?

As Berlusconi implied, these states do not necessarily view Putin or Russia as their enemy. Many see the latter rather, as a potential ally – but most certainly, the Middle East, Africa and Latin America are anything but wedded to the US-mandated rules-based ‘Order’. They have no skin in this intra-European cat-fight.

Yet what awaits their societies is there as ‘writing on the wall’ — in Sri Lanka and Pakistan. Pakistan is slated to pay back over $21 billion in foreign debt within the next fiscal year. It is also struggling with extensive food inflation and supply chain disruptions, as the government seeks to import at least 3 million tons of wheat and 4 million tons of cooking oil to alleviate shortages.

At the same time, some 40,000 factories in Karachi are facing closure as a result of rising electricity costs, making operating near impossible. The Élites, transfixed with their ‘transition’ agenda, seem to have lost sight of the truism that energy – human and fossil, food and material resources – effectively are the Economy. One component sees the crisis rather, as an opportunity – albeit painful – to accelerate the transition.

Now, a desperate western Establishment seems intent on pursuing a militarised proxy ‘long war of attrition’ to weaken Russia. Unfortunately, this strategy will probably starve many to death. The executive director of the World Food Program has warned that 49 million people in 43 countries will be facing starvation soon.

The food emergency, like inflation, is not caused by Ukraine, though the circumstances of a major wheat producer enmired in military conflict, of course, aggravates it. The food crisis is more directly related to ‘transition’ factors (‘greening’ food production), as well as structural change in neo-liberal economies (where food production has been off-shored).

The perversity in all this oncoming pain lies in its brute heedlessness: Europe did not think through its Russia sanctions strategy before unleashing it — so confident were they that Russia would collapse almost immediately. The foreign ministries that drew up the plans did not even consider for a moment the possibility that Russia might not suffer economic collapse, let alone that its economy might stabilize (as it has).

And the planners did not think through the effect of their military proxy war on Russian public opinion. They presumed, without due reflection, that Russia’s military forces were so bumbling that inevitably they must lose. They never discussed the possibility of Russian opinion hardening, as the military operation progressed. They took for granted, rather, that Russian public opinion would turn on Putin as the tide turned against the Russian forces, and that he would be hounded from office. The notion that Russia might win in Ukraine was viewed as a signifier of disloyalty in the West — if not of treason.

The EU leaders ultimately must face their own electorates over such grave errors of judgment — ones magnified by a triumphalist propaganda onslaught that will be seen to have deceived voters, and for which they will be angry. But the bottom line – unfortunately – is that these various ills in the western economic system are structural. A fresh set of leaders will have no ‘silver bullet’ to end them quickly.

Will the Global South break free from dollarized debt?

It’s an act of self harm. Europe is destroying its own economy