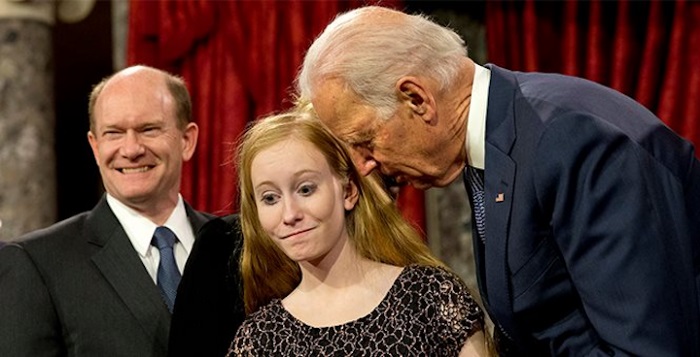 “Privileged” is the word of the day, with liberal narrative managers using their massive platforms to shame and berate anyone who says they’re not going to vote for presumptive Democratic presidential nominee Joe Biden in November.

MSNBC’s Joy Reid recently made headlines by teaming up with Al Jazeera’s Mehdi Hasan to dogpile progressive commentator Kyle Kulinski on Twitter for saying he refused to support Biden and was fine with Democrats blaming him for a Trump re-election.

“What this kind of thing says to me is that these are not ‘left-wing’ voters. They are privileged white voters who demand to be bowed down to, no different than Trump’s voters want those who are not white and Christian to take the knee for them like in the ‘good old days,’” Reid tweeted Monday evening. “These are voters whose primary concern is that everyone else kneel. That’s it. Kneel. Or they threaten the rest of us with the endless torment of Trumpism. Caged children. Viral death. Poverty. Want. Voter Suppression. Muslim bans. Of course none of this harms or impacts them.”

“Well here is [reality],” Reid continued. “No one is going to kneel. Those who get the danger of Trumpism are going to vote and find enough fellow voters committed to doing the right thing. The danger to living, breathing people is real. Most don’t have the luxury to pout over their preferred candidate.”

I continue to find it genuinely bizarre that wealthy & well-connected media pundits & DC operatives log onto Twitter or go on cable news on a daily basis to scream at young, debt-ridden, working-class and/or lower-income people that *they* are "privileged" for not cheering Biden.

There are two problems with this “privileged” narrative, the first being that it is objectively false. As The Intercept’s Glenn Greenwald explained in an article published last week, those who participate in America’s two-party voting performance are overwhelmingly richer and whiter than those who decline to participate, with a comprehensive Pew Research Center survey finding that “Nonvoters were more likely to be younger, less educated, less affluent and nonwhite.”

Which makes sense. Wealthy Americans have two mainstream parties which represent their interests to an extent that is directly proportionate to their wealth, while everyone else is aware to a greater or lesser extent that they do not.

And that is the second problem with the “refusing to support Biden is a sign of privilege” narrative: not only is it objectively false, but the exact opposite is true. Refusing to participate in a system you know doesn’t serve you is not a sign of privilege, a sign of privilege is feeling that you can afford to continue to support a status quo which murders, exploits and oppresses disadvantaged groups at home and abroad regardless of which party’s sock puppet occupies the White House.

One should recall that Obama’s selection of Biden as his running mate following the 2008 primary campaign was a gesture from Obama to the ruling class, an assurance that despite his anti-war posturing and “hope and change” rhetoric, there would be no encroachment on the wealth and privilege of the oligarchy, nor an end to US imperialist wars. Or as Biden put it himself when speaking to major party donors at a 2019 New York fundraiser for his presidential run, under a Biden administration, “nothing would fundamentally change.”

US liberals and progressives talk a bit about white privilege, male privilege etc, but never American privilege, which is the ability their nationality gives them to have a very different relationship with the world than the rest of us.https://t.co/1706cMF39J

The argument that refusing to support the Democratic Party nominee is a sign of privilege is premised on a fundamental misconception about the reality of America’s two-party system. Its exponents believe that there are two separate parties: a really awful and abusive one, and another one which, while imperfect, is still a suitable vehicle for protecting vulnerable communities from the abuses of the other.

That’s the theory. In practice, what you actually get is one party with two distinct yet inseparable faces using a good cop/bad cop routine to advance the interests of the billionaire class which controls them both. From Bush to Obama to Trump Americans have seen a two-headed one-party system consistently advance Orwellian government intrusiveness and destructive neoliberal agendas at home and murderous world-dominating military agendas abroad, without missing a beat. Hell, Obama’s deportation numbers are still greater than Trump’s, but Trump has certainly continued and expanded the murderous foreign policies of his predecessors. It’s been an unbroken legacy of slaughter and brutality regardless of who’s in office.

When Tanzanian President Julius Nyerere was accused by the US of running a one-party state in the 1960s, he famously said “The United States is also a one-party state but, with typical American extravagance, they have two of them.” When you really grasp this truth, you become incapable of ever seeing two separate American political parties again. What you actually see is a single giant monster beating you with both fists while telling you it will beat you harder if you don’t clap whenever it hits you with its left hand.

What is the correct response to being assaulted by such a beast? Is it to placate it and do as it commands? Is it to say “Oh yes mister monster man, I’ll do whatever you want to get you to abuse me with a little bit less ferocity”?

Where 68k Americans die each year due to lack of healthcare, 1 in 4 children live in poverty, and life expectancy continues to drop

If you belong to a privileged group that is more insulated from the abuses of the monster, you will be less inclined to stand your ground and fight it. If you are less privileged, you’ve got a lot less to lose by bringing the fight out into the open.

But how? Simply not voting for Biden is obviously an insufficient and impotent gesture in and of itself; people refused to elect Hillary Clinton in 2016 and the party remained utterly unchanged in every meaningful way. This is because for all their huffing and puffing, those who control the Democratic Party do not actually care about losing to Trump; they know they’ll maintain their status and privilege win or lose, so long as they can successfully protect the political paradigm upon which that status and privilege are premised.

So what can be done? Well, for starters we’ve got to awaken Americans to the reality that they do not live in the kind of nation they were taught about in school. The two-headed one-party monster demands that people clap for its left-armed abuses because it needs to keep the public plugged into the illusion that they live in a democracy and the status quo reflects the will of the electorate. This is precisely the illusion we need to awaken people from if we’re ever to attain a critical mass of people forcing real change.

For what appears to be a limited window of time, the public has an unprecedented ability to network and share information in the democratized information ecosystem afforded by the internet and social media. It’s a highly imperfect medium but it’s the best tool we’ve got for sharing the truth about the reality of our situation, which is why so much effort is going into closing that window via increasingly ham-fisted internet censorship.

The oligarch-owned political/media class continually spouts propaganda geared toward manufacturing the consent of the governed for our exploitative, oppressive, murderous and ecocidal status quo, so our job is to shatter people’s trust in the narratives being promulgated by that political/media class.

Awakening from the establishment narrative matrix to the reality of what’s actually going on is extremely uncomfortable, because it immediately brings on a tremendous disgust and dissatisfaction with what the two-headed monster is doing to us. This is a good thing, not a bad thing. It means that anyone we awaken to the reality of our situation and the lies we’ve been told about it will also experience the same disgust and dissatisfaction, which will in turn drive them to help awaken others, who will in turn be driven to awaken others, and so on. The potential for exponential growth is there.

But, again, that window is closing. We’ve got to strike while the iron is hot.

0 thoughts on “#NeverBiden Isn’t “Privileged”, Supporting The Status Quo Is”