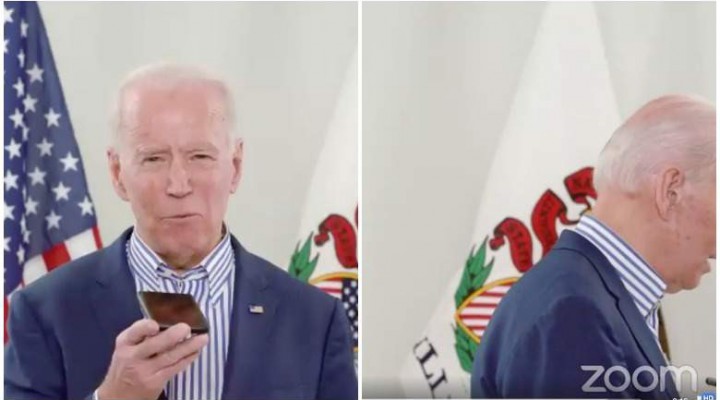 Throughout the appearance Biden repeatedly spoke in a befuddled, incoherent way, severely confusing the amount of time between March and November, even beginning to walk off-camera in the middle of a babbling screed. The derisive implication of this cruel performance being, of course, that Joe Biden is not in possession of his mental faculties because he is suffering from some form of dementia.

Joe Biden held a virtual town hall, during which he laid out details of his health care plan:

"But even I can't do that for another two year—another—a year, between now and November… or actually January… *blink* …but to be covered." 🥴 pic.twitter.com/2EFDlwauxB

“We need a public option providing for the additional funding that would provide for no hidden bills etcetera,” Biden said. “And I can get it done and I can get it done quickly and people will be covered. But even I can’t do that for another two year… another year, between now and November. Or actually, January. But to be covered.”

All to promote the Trumpian talking point that Joe Biden is too confused to understand how years work. What’s next, Joe Biden? Saying Joe Biden would fail at the simple task of drawing a clock?

“In the Delaware legislation we just set up the coastal zone legislation which means that they can’t build any factories or any, any, anything within one mile of the estuary of the Delaware river and the Atlantic Ocean and the Chesapeake,” Biden said at another point, before meandering offscreen in mocking imitation of a former vice president who is suffering from some sort of degenerative neurological disease.

“And so the whole point of this is that we can do a lot to deal with endangered species,” Biden continued, speaking to the wall. “And one of the things I would like to raise is that we have to deal with on an international basis as well, because right now for example we have a thing, you know, Brazil has, the Amazon is burning because they’re trying to clear the Amazon in order to make money in agriculture.”

His livestream video feed was at this point replaced with an “Illinois for Biden” sign, presumably to shield viewers from Russian propaganda.

This is worse than Donald Trump’s rambling. This dude literally forgot what he was doing mid sentence and starts to stumble off screen. I’d say I’m losing my mind but my name is not Joe Biden. #BidensCognitiveDecline pic.twitter.com/5taahWd89g

This is not the first time Joe Biden has promoted the right-wing, Alex Jonesian, Kremlin troll conspiracy theory that Joe Biden has dementia. In fact these outrageously Trumpian neurological episodes have been becoming more and more common as time goes on, in a way that could almost be described as degenerative.

Biden’s active facilitation of this alarmingly Putin-friendly narrative is suspicious, to say the very least. If I didn’t know better I’d say he was actively conspiring to get Donald Trump re-elected. It gives me no joy to say this about such a respected lifelong public servant, but at this point we’d be foolish not to look closely into Joe Biden’s connections to Moscow.