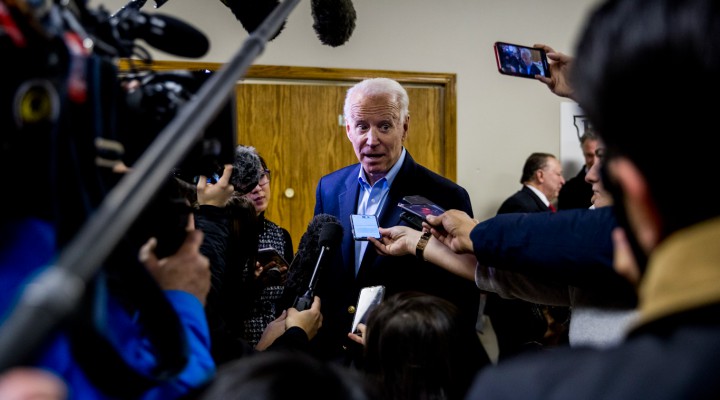 Biden has deliberately refrained from public or media appearances due to his propensity for making egregious errors, but that hasn’t stopped the media from paving the way for a Biden vs Trump contest.

MPN– Joe Biden is once again celebrating after a big night on “Mini Tuesday.” The former vice-president won the popular vote in at least four of the six states on offer yesterday, putting him ahead of his last credible challenger, Bernie Sanders. At a rally in Philadelphia, he framed the contest as over, addressing the Vermont senator’s surrogates directly: “We need you, we want you, and there’s a place in our campaign for each of you. I want to thank Bernie Sanders and his supporters for their tireless energy and their passion,” he said. “We share a common goal, and together we’ll beat Donald Trump.”

Biden, a consummate Democratic insider, has received the wholehearted backing of the party’s establishment and the Democratic-aligned media. Yet his campaign is aware of his serious weaknesses both on his record and as a candidate. He has deliberately refrained from public or media appearances due to his propensity for making egregious errors. Democratic House Majority Whip Jim Clyburn suggested to NPR that the DNC should consider stepping in to “shut down” the contest, canceling any future debates in order to prevent Biden “getting himself into trouble;” something that could hurt the party come November.

This video shows that the autoworker says “this is not OK” in reference to Biden pointing his finger in his face, and Biden flips out and says “you want to take this outside?” pic.twitter.com/UN1Di19v0i

Even as Clyburn was speaking, Biden was doing exactly what he feared. While making a publicity stop in Michigan, he was confronted by a union autoworker who challenged his stance on guns. An angry Biden immediately went on the attack. “You’re full of shit,” he said, while aggressively pointing at the man’s face and calling him a “horse’s ass.” After the autoworker asked him to stop behaving that way, Biden challenged him to a fight, telling him they should go outside.

While the video went viral online, corporate media did their best to sanitize it. MSNBC, for example, managed to cut out all of the above from the short confrontation, showing its viewers only a short clip where Biden lectures the man that he is pro-Second Amendment, also cutting out when he shushed his female colleague and threatened to slap the questioner. Host Andrea Mitchell then went on to attack the Sanders campaign for supposedly siding with Trump on the issue. The incident led many on social media to wonder aloud whether Twitter would flag MSNBC’s account as a purveyor of manipulated videos. Meanwhile, CNN editor-at-large Chris Cillizza spun the event as “probably a good thing for Biden.”

Media have been engaged in an all-out war to stop Sanders from gaining the Democratic nomination. For months it ignored the democratic socialist’s campaign, hoping to starve it of publicity. When it did mention him, the coverage was overtly hostile; a study published this week found that CNN’s Sanders coverage was three times more negative than Biden’s. While much of the corporate media discussion about Sanders has centered around his supposedly toxic online army, research from a computational social scientist at Harvard University found that Bernie Bros are no less or more likely to be rude or threatening online than supporters of other Democratic candidates, suggesting that the media circus surrounding the so-called “Bernie bros” served another purpose from the beginning.

If you think the criticism about Biden threatening to slap an autoworker is about policy differences, and not about a candidate for president shoving a finger in a union worker’s face and yelling “I’m not working for you,” then really I don’t know what to tell you.

Exit polls show wild contrasts in the age range of each candidate’s supporters. Bernie won over three-quarters of the under 30 vote, with Biden picking up just 18 percent. In contrast, the former Delaware senator beat Sanders 73 percent to 21 among the over 65s. The median age of a CNN viewer is 60, MSNBC, 65. Thus, those age groups that rely on corporate-owned media with a strong Biden bias backed the former vice-president, while younger groups that get their news online and from alternative sources saw the campaign in a completely different light. News media, in other words, successfully manufactured consent among their audience for Biden’s campaign.

If Biden is to win the nomination, he will face a stiff challenge winning over Sanders supporters. Branko Marcetic, a journalist and biographer of the former vice-president told MintPress News that his image as a liberal Democrat who has spent his life fighting for the middle class is “wrong is every aspect,” saying: Biden insisted for many years that he was more of a conservative (and legislated like it), he flirted with being a Republican before joining the Democrats in 1969, and there are few politicians who can claim credit to doing more to eviscerate the middle class than him, whether through his bankruptcy bill, his consistent opposition to national health care, or the pushing of trade deals like NAFTA.”

On foreign policy, too, he was an important backer of the Iraq War, and author of the devastating Plan Colombia initiative that has led to 7.7 million internally displaced people in the South American nation, and played a key role in the expansion of NATO to Russia’s border, helping to ramp up tensions with the nuclear-armed nation. As Marcetic said,

Biden spent the 1980s and 1990s pushing the Democratic Party and its leaders to embrace a more interventionist foreign policy not far removed from that of Reagan, helping produce the endless wars that so many Americans are now rejecting. And while he did reportedly oppose some of Obama’s more foolhardy adventures (e.g. Libya), the administration’s “counterterrorism plus” strategy was his idea, and one that, as we see with Trump’s killing of Soleimani, has left a dangerous legacy.”

So, when they push through Biden as the nominee and then, in the general, Republicans humiliate him because of his cognitive decline and we get 4 more years of Trump, what narrative will Dems construct to blame progressives?

While Biden has received endorsements from virtually the entire Democratic field – including, as of yesterday, Andrew Yang – he has failed to win over the left of the party, many of whom see him as the face of the establishment. As journalist Max Blumenthal wrote: “As a pandemic bears down on America, a decrepit babbler with a shell of a campaign kept on life support by 60 billionaires in a wine cave is being sent into battle against an animalistic casino baron. This campaign promises a ghastly portrait of the decadent rot of US politics.”