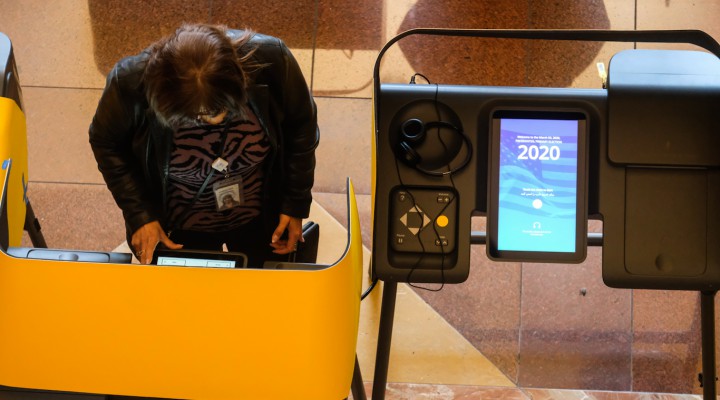 Things got so bad that some voters claimed that if a similar situation occurred in states such as Iran, the US government would intervene to “restore democracy.”

MPN– Chaos and gridlock again reigned across much of America as fourteen states chose their candidates for the Democratic presidential nomination yesterday on Super Tuesday. Many voters were forced to wait in line for up to six hours as understaffed and poorly equipped polling stations were inundated with voters, particularly in Texas and California, the two largest and most influential Super Tuesday states.

In California, electronic voting systems were unable to connect and experienced severe problems, something election integrity activists had warned was bound to happen. The law dictates that all those in line by closing time must be allowed to cast a ballot. But the technical difficulties meant that many stood in line through the evening for their right to choose. MOVE Texas, an activist focused on youth voter turnout organized lines at Texas State University in San Marcos, handed out pizza and bottles of water to those still waiting.

While the long lines were enough to discourage many from participating, the Associated Press called California for Bernie Sanders even as many people were still in line, potentially altering the result. Sanders’ campaign team requested an emergency injunction in California yesterday, asking for polls to stay open for an extra two hours, citing “extreme waiting times” and glitches with the system. This plea was rejected by Los Angeles judge Dean Logan. The gridlock meant that anyone trying to vote after work was likely subject to possibly waiting all night. “This was a challenging day for a lot of voters in L.A. County and I certainly apologize for that,” Logan said. “That’s something that has to be better.”

Other voters said they and even election officials themselves were unable to work out how to use the new electronic voting machines. Ken Proctor of Northridge, CA, realized too late he and his wife’s votes had not counted, as staff had incorrectly told them to take their paper ballots away with them. “I think we both were kind of disenfranchised,” he told the Los Angeles Times.

If this happened in Bolivia, Venezuela, Iran, the US government would have been preparing an "intervention" to restore "democracy". #VoterSuppression https://t.co/o9w6wLiZeB

If this happened in Bolivia, Venezuela, Iran, the US government would have been preparing an "intervention" to restore "democracy". #VoterSuppression https://t.co/o9w6wLiZeB

The Democratic establishment will be very pleased with yesterday’s results, where they successfully coalesced around Joe Biden as a “stop Bernie” candidate, the former vice-president taking at least nine states, jumping him a little ahead of Sanders in the delegate race. However, it was a much worse night for the two other major candidates, Michael Bloomberg and Elizabeth Warren. After spending well over half a billion dollars on advertising and marketing, Bloomberg was able to get only 12 delegates. He quickly dropped out, endorsing Biden. Warren, meanwhile, finished a disappointing third in her home state of Massachusetts, picking up only 28 delegates last night, compared to Sanders’ 328 and Biden’s 380.