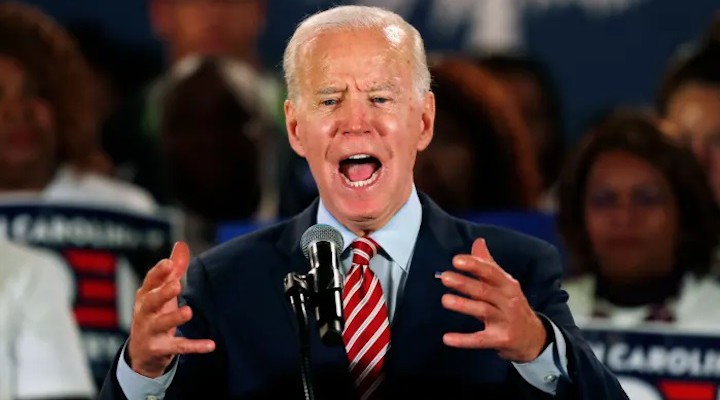 Heyyy America. Rest of the world here. How’s it goin’? How are the kids? Are you still making those Marvel movies? Those are fun.

So, I know you don’t like us to bother you during an election year, but all the people in all the other countries in the world have been talking, and there’s just one teensy, weensy issue we wanted to chat with you about, if you don’t mind.

Ummmm… so, like, are you guys really going to do this Joe Biden thing? Like, for real?

Because, you know, far be it from us to ever interfere in your electoral process, perish the thought please don’t sanction us. But we couldn’t help noticing that you appear to be getting ready to run an actual, literal dementia victim against the current occupant of the White House, who actually seems quite delighted about the matter.

Now of course we all fully support and adore your wonderful reality TV star president. He certainly keeps things… interesting. But we thought that maybe he would be, I don’t know, more of a phase? Like, not something you planned on doing for another four years?

Because you see how he’s already repeatedly mocking Mr Biden’s nonstop neurological misfirings? We just wanted to give you a friendly tip that there is exactly zero chance that that’s going to get better, and 100 percent certainty that it is going to get much, much worse.

If you allow the Democratic Party to successfully install Biden as the nominee, your lovely president is going to make sure his undeniable signs of cognitive decline dominate all news headlines every single day until November. That will happen.

Trump’s attacks on Biden’s mental deterioration are going to get worse, and his dementia probably will too. New video footage of his latest episode of forgetfulness, confusion or inappropriate behavior has been surfacing on what seems a daily basis now, and that’s certainly not going to improve. One day he’s saying “Super Thursday” and forgetting Obama’s name, the next, who knows? Maybe his next stump speech will see him accused of plagiarizing the letter jumble in a bowl of alphabet soup.

Trump will use the bully pulpit as he always has: to manipulate the hyper-reactive mass media into talking about whatever he wants them to talk about. And what he will want them to talk about will be his opponent’s vanishing gray matter.

He will do this constantly. He will do it until Americans are no more likely to vote for Biden than they would for someone screaming about UFOs on a street corner.

What’s wrong with that other fellow running for president? The old guy who’s just trying to give you the same social safety nets we’ve all been enjoying for generations? He seems okay, and, as an added bonus, his brain isn’t committing harakiri inside his skull.

We can see that your media’s brilliant solution to Biden’s most obvious and glaring weakness as a candidate has been to ignore the story completely, or to tell people their eyes and ears are lying to them about what they are seeing and hearing. This Washington Monthly article that’s getting shared around a lot by imperial narrative managers, for example, decries what its headline calls “The Disinformation Campaign Being Launched Against Biden”, saying things like “There is no data to support the allegation that he is in cognitive decline” and “his doctor declared he is a ‘healthy, vigorous’ 77-year-old fully capable of taking on the role of president.”

Insulting and cursing at voters for seeing what is completely visible to the naked eye about Biden, and then topping it off with accusations of bigotry, is definitely a winning strategy against Trump.

The only thing missing is to call anyone who notices this a "deplorable." 👍 https://t.co/7TgV2YWVtd

The article tries to spin people’s organic observations of unedited footage of Joe Biden struggling to maintain verbal and behavioral cohesion as some sort of coordinated, conspiratorial plot instead of just people talking about what they are hearing with their own ears from the mouth of the Democratic Party’s anointed establishment pick. It cites supposed experts who neither directly address any of Biden’s specific recent mental failings nor give any indication that they are even aware of them. It also contains the following problematic section:

He said that cognitive tests are typically not required unless problems are detected.

This isn’t going to work, America. You will not be able to beat Donald Trump by telling them that they are imagining signs and symptoms of dementia that are clearly and unquestionably there, no matter how many think pieces and op-eds you churn out telling people that they are horrible ageist ableist monsters for seeing what they see and hearing what they hear.

Please do whatever you need to do to stop this nonsense and ensure that Donald Trump winds up running against someone who can, at the very least, string sentences together to form complete thoughts.

Thank you and please don’t bomb us,

The rest of the world.

0 thoughts on “Dear America, Please Stop This Nonsense Immediately. Love, The Rest Of The World.”