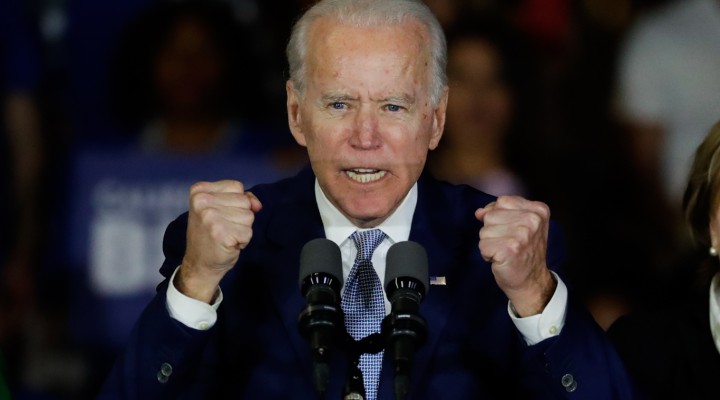 Super Tuesday has raised the stakes and set the stage for a battle for the Democratic Party’s soul; one that will decide if it stays the course with neoliberalism with Biden or moves towards a progressive social-democratic model with Sanders.

MPN– Former Vice-President Joe Biden built on his victory in South Carolina last week to emerge as the only credible “stop Bernie” candidate after Super Tuesday – where voters in 14 states decided on their nominations for president. While results are still not official, it is clear that the former Delaware senator won the popular vote in at least nine states yesterday, including in Texas, Massachusetts and North Carolina, amassing at least 433 delegates. Sanders has currently secured 388, although that number is likely to rise after all of California is counted.

In one of the most remarkable and drastic political turnarounds in American history, Biden – thought of by many as a yesterday’s man – secured a stunning upset victory after a series of key endorsements. His campaign had been flagging, virtually out of money and without organization or many activists on the ground. As of Monday, he had spent just $1.5 million on TV ads in Super Tuesday states, with aides admitting to CNN their goal was merely to “remain competitive;” a remarkable admission for a presidential campaign.

But facing a Sanders nomination, the establishment wing of the party went into overdrive to find a viable alternative to the Vermont senator. Both Pete Buttigieg and Amy Klobuchar dropped out and immediately endorsed him, as did other figures like former Texas congressman Beto O’Rourke. In a matter of mere hours, the Democratic Party higher-ups managed to coalesce around him in a way the Republicans were unable to in 2016 to stop Trump, proving to the world that the party is certainly not incompetent and can organize and carry out operations with military precision when they perceive it is in their interest to do so.

While the establishment pooled its resources (and delegates) in favor of Biden, Massachusetts senator Elizabeth Warren has refrained from dropping out, let alone endorsing Sanders, thus splitting the progressive vote. Warren finished a distant third in her home state and secured only 28 delegates yesterday. In a defeatist message, her campaign managers said they would hold a meeting to “assess the path forward.”

Biden declared victory in Los Angeles last night, presenting himself as an opponent of the wealthy and a champion of the people: “Let’s get something straight. Wall Street didn’t build this country. You built this country. The middle class built this country. And unions built the middle class,” he told the crowd. But his speech was upstaged by anti-dairy industry protestors who stormed the stage. Earlier in the speech he also confused his wife for his sister.

While it is clear that he will now be the establishment’s candidate for better or worse, the former vice-president has a long history of making egregious errors in speaking. Earlier this week at a rally he tried and failed to recite the preamble of the Declaration of Independence. “We hold these truths to be self evident. All men and women created by the…you know, the thing” he stuttered. And while he promises the working-class “cures for cancer, Alzheimer’s and diabetes” under his presidency, he also told his billionaire backers that he believes they are being “demonized” and that “nothing would change” about America if he were chosen. “I need you very badly,” he told a group of extremely wealthy donors last year.

Then, in the same rally, he stumbled through The Preamble of the Declaration and forgot the word ‘equal’.

"We hold these truths to be self evident. All men and women created by the, you know, the thing…"

His policy history and positions, too, might be cause for concern for many voters in the presidential election. These include advocating for cuts to social services, fighting against abortion rights, and supporting NAFTA, the PATRIOT Act and the attacks on Iraq and Libya. And while he retains strong support among Southern black voters, he helped write the 1994 Crime Bill and the Anti-Drug Abuse Bill that exploded the prison population, and fought for segregation and against integration. President Trump has already nicknamed him “Handsy Joe” in reference to his inappropriate touching of women and girls.

While Sanders supporters will be disappointed with the results, other candidates had even worse nights. Chief among them was Michael Bloomberg, who spent more than half a billion dollars on his campaign, picking up just 12 delegates, a third of them in American Samoa. Given his poor performance, that works out to nearly $50 million per delegate. The former Mayor of New York dropped out today, endorsing Biden for the nomination. If he is willing to financially aid Biden anything like how he lavishly spent on himself, Sanders will be fighting a seriously uphill battle.

“It really is a class war we’re up against,” said author and progressive journalist Naomi Klein, who has been traveling with the Sanders team.

The vast majority of this campaign are working class people who are daring to hope for the barest decent things in life. It is this amazing process of raising people’s expectations…What we’re seeing with this establishment pushback, this is not against Bernie Sanders, it is against them. It is against people saying ‘I have a right to healthcare. I have a right to a living wage,’ and it is really sad to see.”

Biden has strong support among the wealthy, the elderly and among Southern black voters. But if he is to win outright and beat Trump in November, he will need to address the age gap in voting. Even in Alabama, where he fared worst, Sanders still comfortably won the vote of those under 30. While there is much work to be done, yesterday was a good day for the establishment wing of the Democratic Party.

Next week will see six more states as well as the Democrats Abroad primaries decided. But Super Tuesday has raised the stakes and set the stage for a battle for the Democratic Party’s soul; one that will decide if it stays the course with neoliberalism with Biden or moves towards a progressive social-democratic model with Sanders.

Intelligence Sources: All Candidates Are Russian Agents But Pete Buttigieg