HOME / WORLD / The Darkness Behind the Democratic Primary Race 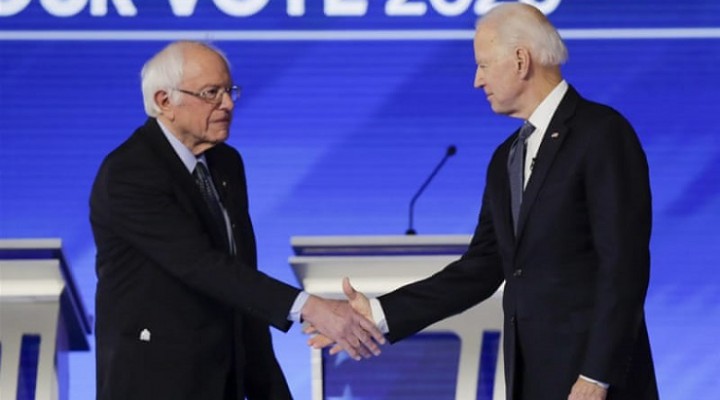 Nothing read in or out of the US remotely resembles real politics in the US. The first issue, of course is the statement continually repeated by the corrupt and ignorant that both parties are the same.

Its core has always been “Red State” voters, with one major issue above all, support for racism and apartheid in America. Now that has expanded to hatred of imaginary millions of transgender people who don’t really exist and Muslim terrorists trying to put Sharia Law in place across the country.

In reality, Muslim communities like Dearborn, Michigan (one of the largest and most cited) are prosperous, welcoming, clean and crime free.

Nearby “Mexicantown,” along Vernor Avenue, now one of the Midwest’s largest Hispanic regions, is also a center for shopping and entertainment, low in crime, clean and orderly.

But then, no one from Nebraska has ever been there, they only know what they read in the corporate controlled newspapers, owned by the same companies, in many cases, that profit from the power of ignorance that has allowed fake news and false flag terrorism for decades to facilitate torture, murder and rape around the world.

Both parties are not the same.

Let’s take a key failing of “lying Obama,” an issue the press relied on for 8 years; Guantanamo.

President Obama promises to close Guantanamo but today it is torturing innocent kidnapping victims much as it had when it opened as a concentration camp after 9/11, one of dozens around the world.

In November 2012, President Obama addressed the nation on this issue explaining how key funding for Social Security, Medicare and emergency services was held up by language the GOP inserted in funding bills that required Guantanamo be kept open.

Obama was blackmailed, the GOP threatened to destroy the United States if Guantanamo was closed.

The media never reported this the same way the American media censored the March 5, 2020 announcement by the ICC at The Hague that the US was being cited for massive war crimes in Afghanistan. But first, we get back to the election.

March 3, 2020 was “Super Tuesday,” the series of primary elections within the Democratic Party that is intended to wash out inferior candidates and end the bloodletting and destruction that are the very root of America’s intra-party struggles.

Two are left standing, Joe Biden and Bernie Sanders. Sanders is said to be a “socialist,” and may well be, if any knew what that actually means in a nation whose government is controlled by corporate criminals.

Let us assume that socialism is bad and that Bernie Sanders is a threat to a nation at war around the world, a police state drowning in debt with a massive military and a history of torture, war crimes and oppression.

That last statement, of course, refers to the March 5, 2020 announcement by the International Criminal Court at The Hague, that the US would be subject to a war crimes inquiry for the use of rape and torture for nearly 20 years in Afghanistan as a matter of national policy.

Trump and Pompeo, in response, have publicly threatened the judges and covertly made moves against them personally, financially and have subjected them to Gestapo style surveillance which includes their children as well.

But we must get back to Sanders, but what are his policies?

The full list is here and to any reasonable person will redefine socialism as freedom from rule by world organized crime syndicates. Thus, Sanders is “Joe Stalin” and plans a communist takeover of America, if you read the press.

But then, why is the press so against Sanders? Could it be that he supports JCPOA with Iran, the missile treaties with Russia and wants the US to stop aiding Al Qaeda?

Is it also because Sanders would end rule of Washington Politics by the coalition of Likudist Israeli’s and Pentagon war mongers who have been above the law and above press exposure for many decades?

This is Sanders, who in Europe would simply be considered mainstream, but smeared continually. But who dropped out?

The “Dangerous Duo,” according to Deep State watchers was Bloomberg and Buttigieg. From a foreign policy standpoint, which in America always means utter submission to Benjamin Netanyahu and the Kosher Nostra that supports him, this pair are pure Trump-Pompeo analogs.

This is from “on the issues” on Bloomberg’s foreign policy:

Buttigieg is something else, pure stealth. Buttigieg, now a former candidate, ran on his military record. From The Hill, a publication that accused me of being a Russian agent:

“According to the documents, Buttigieg served in the Afghanistan Threat Finance Cell (ATFC) in Kabul, placing him in “an imminent danger pay area” from late March to mid-September 2014, while the then-32-year old was still serving his first term as mayor.

The ATFC “identifies and disrupts Taliban, Al-Qaida and other insurgent financial support networks in Afghanistan.”

In his book “Shortest Way Home,” Buttigieg wrote about how he expected to spend the bulk of his time as an intelligence analyst “behind a sophisticated computer terminal in a secure area.”

But out on the campaign trail, Buttigieg has talked about the 119 times he says he crossed “outside the wire,” leaving the relative safety of the base as a vehicle commander on convoy security detail in dangerous parts of Kabul.”

What does this tell us? Nothing in Buttigieg’s personal history, before or since, would have remotely qualified him for running drone assassinations or fake investigations that continually cite the Taliban as running the CIA’s drug empire in Afghanistan.

In fact, Buttigieg’s job description, as given in The Hill, is pure CIA.

His performance during the campaign, pushing forward the CIA agenda against Syria and in support of “freedom loving” Al Qaeda terrorists was sickening to watch.

This leaves Joe Biden. Let’s be clear, Bernie Sanders social programs and “Stand Up to Israel” policy makes him the real “America first” candidate and the only person in American politics, with the minor exception of Tulsi Gabbard, to stand up against the Deep State.

For one, they never attacked Syria. The public is unaware, but insiders know that it was Secretary of State Kerry that ordered the Pentagon to stand down on Syria over fake gas attacks. Kerry personally examined the evidence and found the CIA reports, which were based on MI 6 and Mossad sources, unreliable.

What also isn’t known is that, to keep Israel in line, Obama and Biden removed the two AEGIS ships that are secretly kept on station off the Israeli coast, that are the real “Iron Dome.” This was done in response to Israeli interference in US foreign policy and violation of Palestinian rights.

Past that, Obama and Biden maintained qualified and independent watchdog appointees in every department, a policy Trump ended.

What wasn’t seen, because at no time did Obama and Biden have a party majority in the House and Senate, was funding for their reform initiates, which were continually blocked.

Still, for 8 years, almost no lies out of the Oval Office, no treaties broken, crazy “Facebook bombings” and no name calling and threats.

In fact, the Obama/Biden administration was respected around the world despite Hillary Clinton’s tenure as Secretary of State and, even then, the majority of criticisms and accusations against her have proven to be Deep State smears.

We may never know the truth.

Still, Bernie Sanders, as is simple to ascertain, supports policies that would put America in line with the civilized world and both domestically and in the foreign policy arena end American exceptionalism.

Would Biden do the same? The jury is out on that.

0 thoughts on “The Darkness Behind the Democratic Primary Race”