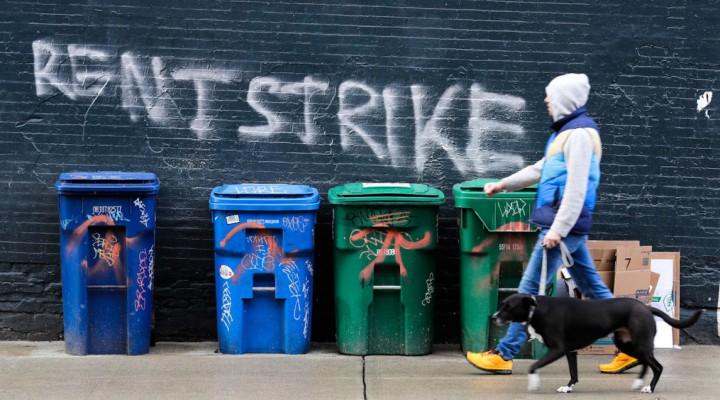 For most Americans, the $1,200 stimulus check didn’t even cover rent and a third of American renters have even paid rent yet this month, meaning an ongoing de facto rent strike is likely already taking place.

MPN– The coronavirus pandemic and the shutdown it has precipitated is having a profound effect on the economy of the United States and the rest of the world. Roberto Azevedo, Director-General of the World Trade Organization warned that his projections predict an economic downturn and job losses more severe than those of the great financial crash of 2008. Renters, those with mortgages, and even many landlords face ruin in this unprecedented catastrophe. An estimated 36 million Americans have filed for unemployment insurance in the previous few months, with millions more losing their employer-based healthcare as a result. Food banks across the country have seen record levels of users and are struggling to keep up with demand, even as fresh produce rots in farmyards as supply lines have been cut.

The Trump administration lept into action to shore up the liabilities of the super-wealthy, pumping $1.5 trillion into the stock market, resulting in only a 15-minute rally. Meanwhile, a recent study of the CARES Act found that 82 percent of the financial benefits from the bill go to the 43,000 Americans who earn over $1 million per year, with less than three percent going to those making less than $100,000.

Unlike in other countries, renters in the United States have been offered precious little government assistance. The median rent in the U.S. is $1,000, meaning that most of the country’s one-time $1,200 check was theoretically spent before it was even received. However, around a third of American renters did not pay rent at the beginning of the month, meaning there is an ongoing, de facto rent strike taking place. This leaves tenants on shaky legal ground as all 50 states have differing laws on the matter. Eviction Lab, a team of researchers on housing, has produced a scorecard for every state with regards to how well or poorly it treats its tenants, based on dozens of laws and indicators. Six states: Oklahoma, Arkansas, Idaho, Missouri, North and South Dakota, and Wyoming scored zero.

Eviction Lab also found that landlords in poor neighborhoods make considerably more profit than those in middle class or even affluent ones, with many not needing rent to pay off mortgages. Nevertheless, smaller landlords, those with only one or two properties, will likely be the worst affected by the drought in income.

Online renting site Airbnb is facing a crisis as the flow of vacation rentals dwindled to a trickle. Last week the company announced it was laying off nearly 1,900 employees – around 25 percent of its staff. The result, if nothing changes, could be that many less well-off landlords will default on their mortgages. Thus, just as the poorest and most vulnerable people in society are disproportionately affected by COVID-19, it will be that smaller businesses of all kinds will go under first, leaving the larger ones to profit. While few renters will shed tears for their landlords’ losses, the upshot of the virus will be that the rich will get richer, the poor poorer and the middle will be squeezed, with Wall Street banks retaking possession of houses and businesses, something that is unlikely to help renters in the long run.

A similar phenomenon occurred during the 2008 financial crash, where millions of Americans lost their homes, unable to continue paying their sub-prime mortgages. Americans were told to suck it up and cope, bearing the brunt of the crisis. At the same time, Wall Street, who was in no small part responsible for the crisis in the first place, was given bailouts of historic proportions, leading to a situation where they are even bigger now than they were before the collapse.

The enforced shutdown essentially allows the government to pick and choose who will be rescued and who will go under, allowing them to reshape both the economy and society to their preferences. Wall Street, which funds both parties to the tune of millions every year, appears to likely come out of this crisis stronger than ever. They will be laughing all the way to (their own) bank.

Feature photo | A pedestrian walks past graffiti that reads “Rent Strike,” April 1, 2020, in Seattle’s Capitol Hill neighborhood. With millions of people suddenly out of work and rent due at the first of the month, some tenants in the U.S. are vowing to go on a rent strike until the new coronavirus pandemic subsides. Ted S. Warren | AP