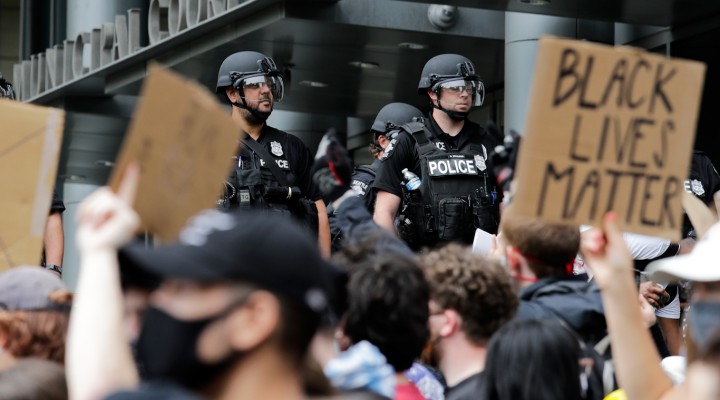 As the Seattle City Council begins its inquest into cutting police funding, it could start with the massively bloated salaries of its top cops.

MPN– Even after a month of nationwide police repression and malfeasance responding to the George Floyd protests, the behavior of the Seattle Police Department (SPD) has stood out as among the most questionable. Viral images show a Seattle cop brutalizing a protestor, putting his knee on his neck in exactly the same fashion that Minneapolis officer Derek Chauvin used to kill George Floyd. Last week, Nikolas Fernandez sped his car into demonstrators at the city’s Capitol Hill Autonomous Zone. When stopped by the crowd, he brandished a handgun with an extended magazine holding 32 rounds, immediately shot protester Daniel Gregory at point-blank range. As the crowd scattered in terror, Fernandez calmly walked towards the police, still holding his weapon, where he was apprehended. The police surrounded Fernandez, facing the crowd, shielding him from a non-existent threat and apparently totally unconcerned at turning their backs on an armed man who had just shot someone. Earlier, Seattle police were caught on camera smashing the widows of a local Target store. In the first week of protests alone, the SPD received over 12,000 complaints alleging serious misconduct by its officers.

After a Seattle officer put his knee on the neck of someone he was helping arrest tonight, observers shouted for him to stop. Then the other officer reached over and physically pulled his partner's knee off the neck. https://t.co/lrLowpnXa3

Last week, the American Civil Liberties Union and Black Lives Matter fought for and won a temporary restraining against Seattle Police, prohibiting the use of chemical agents and other less than lethal weapons against protestors. Foreign countries, including Scotland, have banned the export of tear gas, rubber bullets and other riot gear to the U.S. amid images of brutality.

The city’s police chief Carmen Best opposed the order, ominously stating that they were now “back to batons,” without their superior weapons. She also insisted on reoccupying and controlling the East Precinct, part of the Capitol Hill Autonomous Zone, on the grounds that it could never be a “place of unity and reconciliation and community” without the police there.

However, opinion appears to be against Best’s police force as the City Council has already begun an inquest into their actions and their bloated budget. Washington State police are paid among the most in the country. Local news outlet Kiro7 reported that the Seattle Police Department has a budget of $409 million for 2020, 82 percent of which goes to the salaries, overtime and benefits of roughly 2,000 employees. If this is correct, then that translates to an average income of $168,000 per employee – five times the median personal income of individuals in the United States.

Seattle Police are some of the most overpaid cops in the entire country.

While thousands struggle to pay their bills, SPD is running a protection racket and literally refusing to answer 911 calls.

This after using weapons of war on peaceful protesters. pic.twitter.com/IJ1qzUcwVg

Local newspaper, the News Tribune, published a searchable database app of wages of Seattle’s public employees. In 2018, Best herself made over $300,000. Yet the police chief was not even the highest paid cop on the city’s books. Worryingly, many of the best paid police officers have long histories of violence and corruption. Lieutenant Michael Kebba, the highest paid member of the SPD, received over $336,000 in 2018. Ten years previously, he had attempted to suppress a police brutality complaint when an officer kicked a man in the head. Witnesses claimed the officer said, “I’m going to kick your ass when I catch you” before the man gave up, going to the ground. Kebba dismissed the claims because the officer said he was in danger and “an officer knows better whether he is in danger than even two civilian witnesses.”

Lieutenant Thomas Yoon also made more than Best (over $311,000). In 2015 he shot nine blast ball grenades into a crowd of Mayday protesters, seriously injuring a number of medics. Another Police Lieutenant, James Arata, admitted to, as an act of revenge, sending anonymous letters to his own department full of false information about fellow officers who had helped get him disciplined. He was promoted from sergeant to acting lieutenant the next day. Arata makes nearly $308,000 per year.

Perhaps most notable of the Seattle Police’s highest earners, however, is Lieutenant Greg Sackman. In 2005, Sackman led a gang of four police officers who brutally beat an African-American man for questioning their motives while ticketing his friend for littering. Sackman and the others rammed the handcuffed man’s head into a wall, kicked and stomped on it so badly that his face was left bloodied, swollen and unrecognizable. Seattle police paid him $185,000 in a lawsuit, or around 8 months of Sackman’s salary. The lawsuit notes that Sackman held “far more blame” than the others for the attack. Yet the Seattle Police declined to discipline him at all; in fact, he was promoted to lieutenant very shortly afterward.

While policing is often thought of as a blue-collar job, across the U.S., and especially in Seattle, officers receive enormous compensation for controlling and suppressing the population. If the city’s council is looking to save money by cutting the police budget, the obvious place to start is with their top cops’ salaries.

Feature photo | Seattle Police take cover behind a barricade as protesters fill the street in front of the Municipal Court of Seattle, across from Seattle City Hall, June 3, 2020, in Seattle. Elaine Thompson | AP