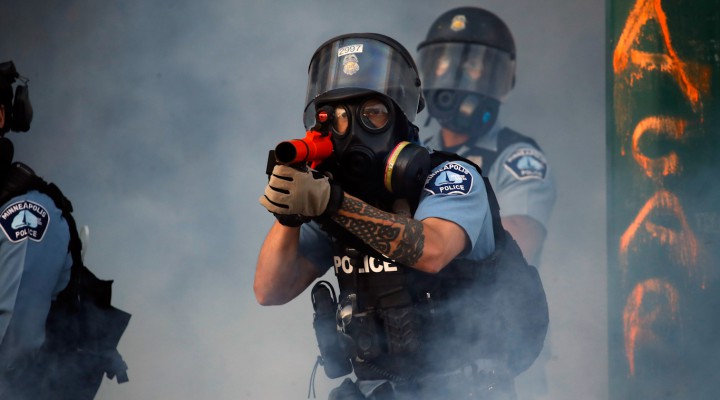 “The only reason I’m dealing with this so well is I think poverty and low wage work is just as brutal and visceral as losing an eye to a police bullet.” – Linda Tirado

MPN– Journalist and photographer Linda Tirado was standing near a police line in Minneapolis May 29, covering the George Floyd protests engulfing the city. All of a sudden, her face “exploded” in her own words. She had been shot from close range in the eye, permanently blinding her. Her goggles shattered and tear gas entered the wound, causing even more pain. The police had shot her. Protestors pulled her away from her attackers, put her into a vehicle and drove her to the hospital where they were unable to save her eye, but were able to give her a $58,000 bill, likely the first of many.

Now, in a wide-ranging interview with writer Luke O’Neil, she spoke out about the ordeal, brutal policing, and the state of America today.

Tirado revealed that her first reaction to receiving the enormous bill, initially slated to be $2,900 per month, was to laugh. Tirado is a freelance journalist supported by readers via Patreon, not the most lucrative profession. The hospital finally settled on a $100 monthly payment. “It will take me just under twenty five years to pay off the first surgery,” she said, adding that she was “completely fucked.” “I’m in for $58,000 so far between two surgeries. And those are just the ones I know about. I’ve got a few more surgeries coming up… there’s no fuck off way that’s going to happen,” she added.

“It sucks to be poor”

Tirado is probably best known as the author of the book Hand To Mouth: Living in Bootstrap America, an account of the grim reality of how the nearly half of the Americans who live paycheck to paycheck survive, or “288 pages of It sucks to be poor,” in her own words. She was also the author of a viral article in the Huffington Post that explained to privileged readers why poor people’s decisions are not irrational but make perfect sense given the dystopian economic realities they live under. Growing up poor herself, she says, has given her the strength and perspective to cope with the ordeal. “I think the only reason I’m dealing with this so well is I think poverty and low wage work is just as brutal and visceral as losing an eye to a police bullet. It’s just that people don’t think of it that way because it happens to more people,” she told O’Neil.

She compared what happened to her in Minneapolis to her previous jobs on farms and in factories. “When that’s your job you kind of know that you’re going to be permanently disabled at some point, and it’s a crapshoot for how many good years you’re going to get,” she said, “I made it to thirty seven man. I did ok. And how fucking bleak is that?”

Living in America means calling the police could kill someone and calling an ambulance could bankrupt someone.

As a journalist and photographer, Tirado spent a good deal of time in Ferguson, Missouri, a city that exploded in anger after the police shooting of Michael Brown in 2014. Yet nothing she saw there prepared her for the violence in Minneapolis. “I thought St. Louis cops were going to be the worst I ever saw. Then I got to Minneapolis and I was like, holy fuck, it’s next level up here,” she said, “People had told me you’re going to Minneapolis, be careful, those guys don’t fuck around.” While many have tried to downplay the actions of officers like Derek Chauvin, claiming that they represent merely a few bad apples, Tirado sees it a different way, noting that the metaphor explicitly states that bad apples spoil the entire bunch.

She shared her final photos of the fateful night on her Patreon page, taken right before the incident. They appear to show Minneapolis police officers pointing weapons directly at her. She told CNN there is no way they “could have mistaken me with a professional camera for anything but working press.”

Tirado is currently suing the City of Minneapolis for damages and injunctive relief. In her announcement, she acknowledged that, because the taxpayer will foot the bill for any damages, a substantial portion of anything won will go towards local community initiatives. Since no other group has been documented using foam bullets, it is not certain if the police will argue against their culpability; “It could very well have been us,” stated police spokesperson John Elder, when commenting on the case.

If one good thing has come from the police crackdown, Tirado argues, it is that an increasing number of Americans have come to see the ugly reality of life for so many and have turned against the government and the system itself. She said that for generations raised on Rush Limbaugh, Trump was a godsend, and his rise deeply troubled her. “I’ve been using the fascism word openly since 2015,” she said, but now so many more are beginning to realize the danger she saw five years ago. “The landscape has changed,” she concluded.