HOME / Multimedia / Is Brazil About to Face a Military Coup? Brian Mier on Brazil’s March Towards Fascism 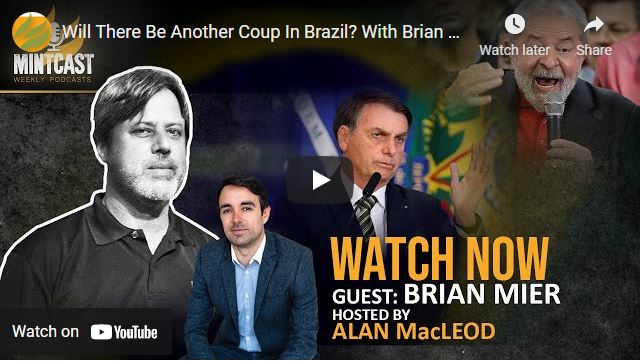 Whispers are turning into shouts about a military-backed coup in Brazil before next year, as the ailing Bolsonaro — trailing Lula by 15-20 points in the polls — seeks to hang on to power.

MPN- Brazil, the world’s fifth-largest country, is at a political crossroads. Heading into next year’s presidential elections, the country’s 211 million people are faced with choosing between social democrat and anti-imperialist Lula Da Silva (president between 2003 and 2010) and far-right populist incumbent Jair Bolsonaro.

But many are worried they will not even be allowed to elect anyone. Whispers are turning into shouts about a military-backed coup before next year, as the ailing Bolsonaro — trailing Lula by 15-20 points in the polls — seeks to hang on to power. The 66-year-old former military officer recently stated that there are only three potential futures for him: arrested and jailed, killed, or staying on as president, only adding fuel to the fire of speculation.

Bolsonaro came to power in 2018 in a deeply flawed election that saw Lula imprisoned on phony corruption charges. Still ahead in the polls, judges ordered Lula be stripped of the right to stand for office, even from his jail cell. The judge leading the “anti-corruption” crusade (known as Operation Car Wash) was quietly co-ordinating with the prosecution the whole time, and later accepted a position as Justice Minister in Bolsonaro’s cabinet.

Here today to talk about Brazil’s past, present and uncertain future is Brian Mier. Brian is co-editor at Brasil Wire and Brazil correspondent for TeleSUR English. Unlike most U.S. journalists who cover the country, Brian has lived and worked in Brazil for over 25 years and speaks Portuguese. He also co-edited the book, “Year of Lead. Washington, Wall Street and the New Imperialism in Brazil.”

In that time, he has closely watched the rise of Lula and the Workers’ Party. A former shoeshine boy and a manual laborer, Lula moved into politics via the trade union movement. Once in office, he, along with other figures like Venezuela’s Hugo Chavez and Bolivia’s Evo Morales, led a continent-wide revolt against the United States empire and the neoliberal economic system it had imposed on Latin America. By 2011, the majority of Latin Americans lived in countries that had joined this alliance, as South America, in particular, began building new organizations to replace discredited, American-dominated ones like the Organization of American States.

Domestically, Lula’s government is credited with pulling 36 million people out of extreme poverty through their flagship social programs, especially the Bolsa Familia, which gave direct cash transfers to poor Brazilians if they vaccinated their children and sent them to school.

However, Lula’s actions made him many enemies among the rich and powerful, especially in Washington D.C. Brasil Wire’s reporting has shown that the FBI was intimately involved in the plot to overthrow Lula’s successor, Dilma Rousseff, and imprison Lula himself, paving the way for Bolsonaro to rise to power.

While Bolsonaro has been anything but a steady pair of hands, running the economy into the ground and presiding over perhaps the most bungled COVID response of any nation, he has maintained an unshakeable loyalty to the whims of the U.S. government, even agreeing not to buy Russian or Chinese vaccines on Washington’s orders.

Bolsonaro insisted COVID was nothing more than a “little flu,” held huge rallies despite spiking cases, and promoted useless COVID cures such as hydroxychloroquine, even after the Trump administration had quietly dropped the drug.

So obvious was the need for an organized response that Brazil’s notorious drug gangs turned out to act in a more responsible manner than the government, unilaterally imposing curfews in the neighborhoods they controlled. “If the government won’t do the right thing, organized crime will,” read one Rio De Janeiro gang’s press release. “Brazil, in what may be its darkest hour, is at the mercy of a deranged lunatic. This is no exaggeration,” wrote Brasil Wire.

0 thoughts on “Is Brazil About to Face a Military Coup? Brian Mier on Brazil’s March Towards Fascism”