HOME / SOCIAL/CULTURAL / “Who’s Going to Pay For it?” A Dying Patient’s Last Words Before Being Placed on a Ventilator 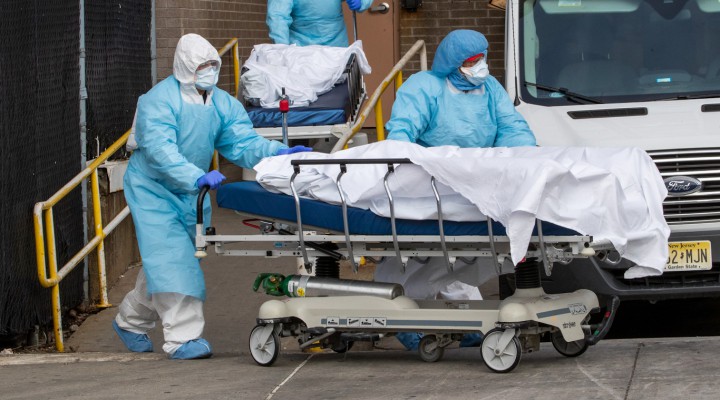 In a country that leads in slashing budgets and encouraging individualism, the top-down failure to respond to the coronavirus has been uniquely American in flavor.

MPN– Who is going to pay for it? Those were the last words a patient dying of COVID-19 asked New York City doctor Derrick Smit. The man appeared more concerned about the potential cost he and his family might incur than the loss of his own life. Smit shared his experience in a now viral Facebook post about what he described as the worst experience of his professional career.

“[His] Last words I’ll never forget // the response my patient gasped out (between labored breaths) to me and my team, after we explained that he needed to be intubated and placed on a ventilator. We then called his wife to have him speak to her for what was likely his last opportunity, as many patients do not recover once tubed,” he wrote, describing having to hear a dying patient use his final words to worry about healthcare finances as “next-level heartbreaking.”

“Who’s going to pay for it?”Last words I’ll never forget // the response my patient gasped out (between labored…

Unfortunately, this uniquely American story is all too common. In 2018, a Boston woman crushed by a subway train in a freak accident begged onlookers trying to save her not to call an ambulance. Her fellow commuters knew why: the cost of a single ambulance trip in the United States can exceed $8,400. Medical bills are the leading cause of bankruptcy in America, and drug prices are far in excess of other countries. For example, U.S.-made HIV medication that retails for $8 in Australia costs around $2,000 in the United States. MintPress News spoke with Smit Tuesday evening. He said what his patient told him was so jarring because in his role as a doctor he usually has the luxury of not being aware of patients’ financial situations. But this was an all-too-real example of a dysfunctional healthcare system at work.

Smit made an impassioned plea for the U.S. to quickly transition to a comprehensive nationalized health system. Quoting a recent article, he wrote:

As COVID-19 spreads around the world, now impacting over 700,000 people in 194 countries and territories, there is a clear difference in how well various countries are containing the pandemic. Those countries that have universal, publicly financed health care systems are better able to coordinate their responses and care for those who are ill. They have been the fastest to slow the spread of the virus.”

“We have a tertiary system. We are not about primary prevention. We are not even about secondary. Unfortunately, one of the bigger burdens is patients coming into ER departments when their illnesses are [already] at their most acute stage…it is far from ideal,” he told MintPress.

The U.S. is an outlier in the developed world in not providing universal healthcare. In the last week, millions of Americans have lost their jobs, and therefore, their employer-based health insurance. Around 160 million rely on this system and are potentially in danger of losing their health plan at any moment. Moving towards a system like those of every other rich country is very popular with the American public; some polls show nearly three-quarters of Americans, including a majority of Republicans, favoring Medicare for All. A majority of physicians in the private healthcare industry agree with Smit about the necessity for immediate change.

It would be overly costly to implement. In fact, a recent meta-analysis showed that 91 percent of all peer-reviewed scientific studies found that a single payer healthcare system like Medicare for All would save the country money, 86 percent finding that savings would already be made in year one of any transition.

The problem, however, is political. Republicans remain steadfastly against any expansion of public healthcare, continuing to try to destroy the Affordable Care Act. But presumptive Democratic nominee Joe Biden has also doubled and tripled down on his opposition to Medicare for All, repeating that he would even veto any bill passed by the House and Senate that tried to move towards it, thus dooming Americans to continue rationing expensive medication, use fish antibiotics and dog insulin as dangerous substitutes for human medicine, and sell blood to buy pills. Despite being constantly praised for their heroism, doctors across the United States are facing pay cuts in response to the COVID-19 pandemic, as other for-profit hospital departments have lost out on business.

Smit is adamant that the problem is a systemic one, revealing that another outlet contacted him who wanted to frame his viral post merely as a partisan issue highlighting Trump’s failures.”Frankly I think it is a bipartisan effort that produced affairs that are causing the issues that we as front line healthcare providers are picking up the pieces from at this point. It is not just one administration, it is the entirety of our government,” he told us, criticizing the corporate press’ presentation of the crisis.

I don’t think the mainstream media does a good job of showing what’s really happening. I feel like they are more focused on showing an empty supermarket and stuff that just sells consumerism as opposed to the frank reality.”

Joe Biden just said he would veto Medicare-for-All because it would "delay" healthcare coverage.

New York is the world epicenter of coronavirus. If recent trends continue, by Tuesday there will be more confirmed cases in New York alone than in any other country in the world. In both infections and deaths, the city has far surpassed the whole of China. “We are doing the best we can,” Smit said, “but people are dying left and right, no exaggeration.” Makeshift morgues – cooled trailers full of bodies – have sprung up across the city. “It’s something I don’t think anyone ever really imagined before,” he added glumly.

Worse still, Smit feels that “we are only just at the beginning. I don’t think we are anywhere near our apex, statistically speaking.” COVID–19 is “unprecedented in a variety of ways…the virus itself we are still learning so much about. So many people get critically ill so rapidly, I’ve never imagined or seen our healthcare system take such a beating before,” he said. “This is something that none of us have ever really seen.”

Hospitals are overrun with patients and prisoners are being made to dig mass graves for victims on Hart Island in the Bronx. For weeks the Trump administration claimed the virus was a liberal “hoax” intended to remove him from the White House. It then put out conflicting advice; the president even suggested churches should be full by Easter Sunday. In a country that led the world in slashing budgets and encouraging individualism, the top-down failure to respond has been uniquely American in flavor. “This situation is by far the worst thing I’ve witnessed in my collective 12 years of critical care & anesthesia,” Smit concluded, “This country is truly a failed state, and it’s so sickening to witness firsthand, more blatantly than ever.”

0 thoughts on ““Who’s Going to Pay For it?” A Dying Patient’s Last Words Before Being Placed on a Ventilator”