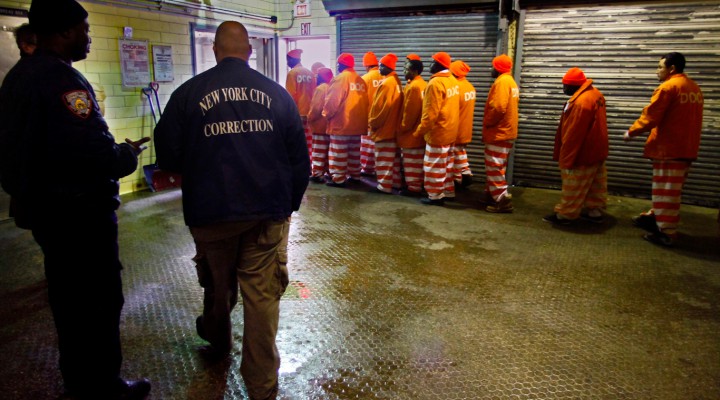 Rikers Island itself is on the verge of near collapse, over 300 inmates and staff have tested positive and human rights campaigners warn conditions in the notorious prison are dire.

MPN– One month ago, MintPress News reported that, in the case of a particularly bad COVID-19 (coronavirus) epidemic in New York City, authorities had drawn up contingency plans to dump the bodies in mass graves on Hart Island, a small island just off the Bronx in the Long Island Sound. The plans had been drawn up by former New York Mayor Micheal Bloomberg during his time in office.

The article might have appeared alarmist at the time, considering that the city had only one confirmed coronavirus case and patient zero was self-isolating in her Manhattan home. But one month later, things are bad. Really bad. City authorities have confirmed 41,771 cases of the novel coronavirus as of March 31, with nearly 1,100 deaths.

Yesterday The Intercept’s Ryan Grim confirmed that what we reported last month had indeed come to pass and that prisoners from the notorious Rikers Island jail are now being made to dig graves. Inmates have been promised the princely sum of $6 per hour to risk their lives disposing of the disease-ridden victims, with authorities insisting that they will be given adequate personal protective equipment, a dubious claim considering that hospital workers in the city have had to improvise, wearing plastic trash bags as shields against the deadly virus.

Bizarrely, a spokesperson for Mayor de Blasio’s office said the offer was not related to coronavirus. This is hard to believe; inmates already conduct burials for thousands of poor, homeless or unidentified people on the island and, until yesterday, were paid only $0.50 for the work. Why New York City would suddenly be offering prisoners a 1,200 percent pay rise during a nationwide economic collapse that has seen even frontline doctors and nurses having their pay drastically slashed, if not due to the desperately urgent need for more labor, is unclear.

The job is being presented as a voluntary service. But in reality, prisoners have little choice. American jails are an expensive place to be, with prisoners charged exorbitant fees for phone and video calls, food and other basic necessities. Furthermore, it is not clear whether those on Hart Island will actually be putting themselves at more risk than those staying inside Rikers.

While New York City is one of the global epicenters of the crisis, the prison has an (official) coronavirus infection rate seven times higher, and the situation inside the walls has reached near-collapse. An attorney from Brooklyn Defenders shared information she had received from inmates and their desperate relatives. 3,200 people are incarcerated, mostly in cramped dorms of 40-50 people, less than two feet apart from one another. Some have no bed and must sleep on dirty floors. The word “shit” was daubed on the wall with actual feces and has not been washed off for days because guards have stopped cleaning, essentially abandoning them to their fate. Many have stopped coming to work, displaying symptoms of the coronavirus themselves. Over 300 inmates and staff have tested positive already, and the number is rapidly rising. When inmates ask for cleaning products, they are denied. There are no medical appointments because clinics are full. After sharing these stories, she ended by saying “I’m begging you [Governor Cuomo and Mayor de Blasio] to use this moment, which is shattering so many of our norms, to demand humanity for them.” It may now be too late.

Hart Island has a particularly grizzly past. In the 1860s it was used as a training ground for Union troops and a prison camp for Confederate soldiers. It was also the site of a notorious psychiatric institution, a tuberculosis sanatorium and a quarantine zone for those who caught typhoid. Today, nobody who goes to the island leaves, except those doing the burials. Over one million poor, homeless or unknown New Yorkers have been interred there, none of whom have a tombstone. In the 1980s the first victims of the AIDS crisis were buried in special, extra-deep graves by authorities who were ignorant of how the disease spread.

I wouldn’t be surprised if CNN put Chris Cuomo up to begging his brother to run for President.

These interviews are always hilarious. pic.twitter.com/JQHadCHKWA

In the past month, Governor Cuomo has emerged as a hero of the centrist wing of the Democrats for his supposedly responsible leadership in a time of crisis. He was lauded in the press for his announcement that prisoners would be making hand sanitizer to fight the virus. Whispers have turned to open talk that the party’s higher ups want him to replace Joe Biden as their candidate for the November election. In a bizarre and extremely tetchy interview with his brother, CNN anchor Chris Cuomo, he denied he had any intention to run for president. Yet Andrew himself presided over sustained and widespread attacks on the public health system. As The Nation stated, “Cutting Medicaid has been a priority of Cuomo’s since he took office in 2011.” Furthermore, it transpired that inmates were not making hand sanitizer at all; Cuomo having bought it in from abroad to score a publicity coup. Thus, it appears likely that, because of the governor’s inactions, Rikers Island prisoners will likely be burying some of their cellmates very soon. It is doubtful the $6 will be much comfort.