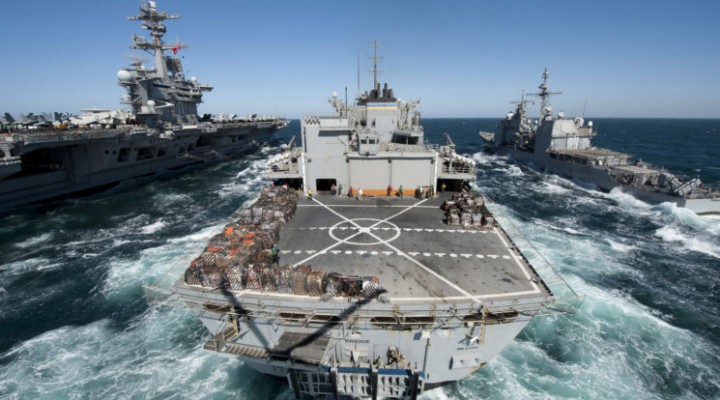 The Trump administration is criminally fueling an arms race and even more conflicts in the Middle East; possibly a cataclysmic war. But, in truth, this has always been the pernicious role of the US in this blighted region.

US media reports have claimed that China is helping to expand Saudi Arabia’s ballistic missile arsenal. The implication from the US media is that Beijing is recklessly stoking tensions in the Middle East between Saudi Arabia and Iran.

China has denied it is involved in supplying the Saudis with ballistic technology. However, various US “experts” are cited by American media claiming that satellite images indicate that alleged ballistic missile sites in Saudi Arabia appear to be sourced from China.

Given the bombed-out credibility of US media, as demonstrated by a myriad of subjects, from alleged Iraqi weapons of mass destruction to hysterical, baseless claims about “Russian meddling” in elections, the watchword here is very much “skepticism” towards American media reports.

What seems immediately incongruous about the purported Chinese ballistic missiles to Saudi Arabia is the fact that Beijing has otherwise shown itself to be a stalwart ally of Iran in recent years. China is a major importer of Iranian oil as well as investor in exploring Iran’s vast natural gas reserves. Looking to the future, China and Iran view each other as strategic partners for mutual development. Iran has embraced the Chinese “Belt and Road Initiative” linking Eurasian economies, and will be a pivotal player in paving the new silk trade routes between Asia and Europe.

After the Trump administration unilaterally trashed the 2015 international nuclear accord with Iran, China has, along with Russia, been a staunch advocate for upholding the treaty. China continues to buy Iranian exports of crude oil despite Washington’s threats of punitive sanctions.

In this geopolitical context, it therefore seems doubtful, if not implausible, that China would put its strategic relationship with Iran at risk by allegedly supplying ballistic missiles to Iran’s archenemy Saudi Arabia. Beijing would be well aware that Tehran would view such a development as a form of treachery, thus jeopardizing the strategic partnership between Iran and China.

It is true that Saudi Arabia is also a major oil exporter to China’s voracious consumer market. All’s fair in business, we may suppose. But for Beijing to start supplying ballistic missiles to the Saudis, especially at such a precarious time for Iran, seems like a conceptual bridge too far.

The other thing is that the Iranians have not publicly expressed any misgivings about the reports alleging China’s support for Saudi missile development. That suggests the reports are baseless, just as the Chinese government has been insisting.

So, what is going on here?

It seems significant that Washington is in the midst of a trade-war showdown with China. The trade war is only part of a bigger geo-strategic confrontation between the waning American empire and re-emerging powers such as China and Russia.

Trump is demanding China make major concessions to benefit the US economy.

It is thus in Washington’s interest to try every dirty trick as a way to undermine China, just as it has done with Russia over any number of slanderous claims.

China being blamed for stoking Middle East tensions between Saudi Arabia and Iran would fit the bill for a campaign of media slander.

The irony of this, of course, is that it’s Washington that is the party which is actually inflaming tensions in the region.

The Trump administration is provoking Iran with military threats, baseless accusations about “sponsoring terrorism” and strangling the nation with illegal sanctions, otherwise known as “economic terrorism”.

Not only that, but the Trump administration is piling billions of dollars of weapons into Saudi Arabia in defiance of the US Congress imposing restrictions due to the horror of the Saudi air war in Yemen and atrocious human rights conditions within the kingdom.

Furthermore – and this is astounding in its recklessness – the Trump administration appears to be helping Saudi Arabia develop nuclear weapons. There are credible reports that President Trump is permitting US nuclear power companies to share sensitive technology with the Saudis that could be used in the future to build weapons of mass destruction. Such a move is in violation of the 1970 Non-Proliferation Treaty (NPT) forbidding nuclear-armed powers from propagating this weaponry.

(Bear in the mind too that this is the same US administration which has discarded the Intermediate-range Nuclear Forces treaty with Russia and is set to do likewise with the New START treaty governing intercontinental weapons.)

This is the real scandal about Middle East tensions. The Trump administration is willfully and illegally changing the strategic balance in the region by seemingly paving the way for Saudi Arabia to obtain nuclear weapons. If that transpires, then Iran may have to, by necessity, forego its non-nuclear doctrine and eventually build the bomb as a matter of survival given the existential threat posed by the Wahhabi Saudi regime and its irrational hostility towards Shia Iran.

The recent alignment between Saudi rulers and US historically nuclear-armed Israel – cemented by the Trump White House – is further cause for apprehension in Tehran.

The Trump administration is criminally fueling an arms race and even more conflicts in the Middle East; possibly a cataclysmic war. But, in truth, this has always been the pernicious role of the US in this blighted region. The Middle East is war-torn and conflict-ridden as a direct result of meddling US imperialism over seven decades since the end of World War Two. Under Trump, the usual American recklessness is going nuclear.

Trump accuses Iran over nukes, all the while risking Saudi regime acquiring the bomb