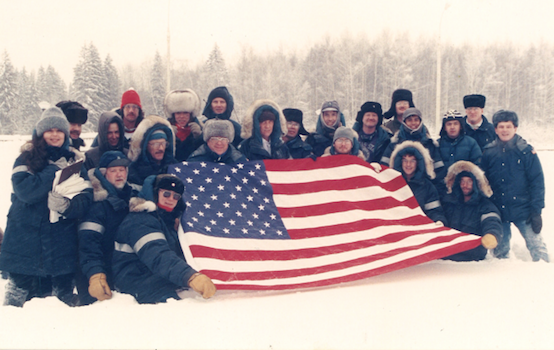 Armed with pen and clip board, our author was one of the first INF inspectors on the ground in Soviet Russia in 1988.

Today, August 2, more than 31 years of history comes to an end, as the Intermediate Nuclear Forces (INF) Treaty officially expires.

For many, its death is little more than the passing of an antiquated agreement whose time long ago passed. The landmark arms control treaty broke new ground when it was signed in December 1987, eliminating two classes of nuclear missiles and engendering stability in Europe. It also put the U.S. and the Soviet Union on the path towards larger and more meaningful cuts in their respective strategic nuclear arsenals.

The collapse of the Soviet Union at the end of 1991 and the emergence of a weakened Russia struggling with a shattered economy and political uncertainty brought an end to the sense of urgency over arms reductions. And decades later, confronted by a resurgent Russia accused of violating the restrictions imposed by the treaty, as well as the nuclear arsenals of China, Pakistan, and others never subjected to constraints, what had been a foundational agreement became little more than a legal impediment to U.S. security interests. So when President Trump announced that he would be withdrawing from the INF Treaty in October 2018, few understood the implications of his decision.

There is a class of Americans, however, for whom the end of the INF Treaty resonates deeply. It is comprised of aging Cold Warriors—whose military service involved containing, on a daily basis, the clear and present danger posed by the threat of nuclear armageddon—and civilian technicians, who volunteered to help bring an end to this era of nuclear terror. These Americans were united in an experience so unique and world altering that, even today, some three decades later, it helps define who they are simply by stating what they were: inspectors.

While arms control had been an integral part of the U.S.-Soviet relationship since the mid-1950s, neither side was able to take the step of engaging in verifiable disarmament, due to high levels of mutual distrust. In the wonkish world of political science that dealt with arms control treaty compliance, the means of verification—largely satellite imagery—were too imprecise to provide a level of detection guarantee that would offset the perceived benefit that could be gained by cheating.

The only way to increase detection potential to overcome most cheating scenarios was to insert the human element, in the form of onsite inspectors, who would carry out assigned verification tasks. For decades, the Soviet Union refused to consider such inspections, fearful that the U.S. would use the inspectors as spies. What made the INF Treaty so important in the history of arms control was that, for the first time, onsite inspections were embraced as the prime means of verification, not just peripheral activity.

The INF Treaty created five types of on-site inspection: baseline, elimination, close-out, short notice, and perimeter portal monitoring (PPM). The first four inspection types dealt with the nuts and bolts of treaty verification. Hundreds of military personnel—Soviet specialists, Russian linguists, and ballistic missile technicians—were recruited and trained to carry out these demanding operations. The treaty went into force on July 1, 1988, and by October 1991, the last weapons that it covered had been destroyed and their associated facilities closed out. Short-notice inspections would continue for the 13-year duration of the inspection protocol, but they never reached the level of intensity that existed during those first hectic months of implementation.

The fifth type of INF inspection, PPM, wasn’t even supposed to exist. Early on, during treaty negotiations, the Soviets sought to retain a certain number of SS-20 mobile missiles, which were produced at a factory outside the Russian city of Votkinsk, nestled in the foothills of the Ural Mountains, some 700 miles east of Moscow. Under such a scenario, the U.S. insisted it needed inspectors permanently based outside the factory to monitor missile production. This was unacceptable to the Soviets, who eventually agreed to eliminate the SS-20 missile in totality, and in so doing eliminated the need for PPM inspections.

The INF Treaty was signed on December 9, 1987. However, in November 1987, the Soviets declared that they had produced an intercontinental ballistic missile (ICBM), the SS-25, whose second stage was nearly identical to the second stage of the SS-20 missile. This meant that missile production at Votkinsk would need to be monitored through PPM-type inspections to ensure that SS-20 missiles weren’t being shipped out disguised as SS-25s. Due to the last-second nature of the Soviet admission, PPM inspections were added to the treaty inspection protocol, but the specifics of how this task would be accomplished was left for technical experts to work out after the treaty was signed. While this may have sounded like a good idea to the diplomats, in practice it turned out to be a near disaster.

The PPM inspection concept was designed to minimize the human element. By integrating road and rail scales, infrared measuring systems, cameras, and a giant X-ray machine known as CargoScan, PPM was supposed to be a foolproof system where inspectors responded to “go-no go” inputs generated by the technology. While this may have worked on paper, in practice it proved to be impossible to implement, especially in the middle of the Soviet Union, far removed from the kind of technical and maintenance support needed to operate the system on a reliable basis.

The “inspector with a clipboard” was the antithesis of the PPM ideal. And yet, when the inspectors first arrived in Votkinsk on July 1, 1988, that was literally the extent of the technology available. It took nearly 10 months to install the data control center where the various monitoring technologies would be operated. Rail scales, intended to differentiate between an empty railcar and one carrying a missile (the SS-25 missile was shipped from Votkinsk in specially designed railcars), were the first treaty-mandated verification tool to be discarded; they were overly complex and difficult to maintain. The CargoScan X-ray system was intended to scan every missile exiting the factory to make sure an SS-20 wasn’t hidden inside. But it wasn’t until February 1990 that CargoScan was declared by the U.S. to be operational, and even then it wasn’t until after a major diplomatic crisis in March 1990, during which the U.S. and Soviets finally agreed on how CargoScan was to be used, that the first missiles were imaged.

Building the PPM system from scratch was a herculean task, undertaken in the heat of the Russian summer, the mud of the Russian fall, and the bitter cold of the Russian winter. And while the inspectors worked, there still was the fundamental job of inspections to be carried out. With little more than clipboards and measuring tape, they would squeeze into railcars loaded with missile launch canisters, conduct the requisite measurements, and then, on a random basis eight times a year, request that the Soviets open up missile canisters so they could visually confirm that the missiles inside were the permitted SS-25s and not the prohibited SS-20s.

I was proud to be a part of these PPM inspections. I had been selected to serve as part of a five-person advance team dispatched to Votkinsk, and as such had the honor of being among the first U.S. inspectors on Soviet soil when the sun rose on the day the treaty went into force. I was one of those “inspectors with a clipboard” who made the treaty work during those hectic early years.

Together with my military colleagues from the On-Site Inspection Agency, and the civilian contractors from Hughes Technical Services Company, we did the seemingly impossible, and, in doing so, changed history. Today, “weapons inspector” is synonymous with arms control. Whether he was in Iraq after the Gulf War, in Iran as part of the nuclear deal, or in North Korea as part of any future denuclearization effort, the weapons inspector is a necessary component of any serious arms control agreement. Had we failed in our mission, that would not be the case.

On August 2, a handful of middle-aged men and women in the U.S., Russia, and elsewhere will raise their glasses and offer a toast in honor of the memory of the treaty they helped make a reality. That the world ultimately proved unworthy of their labor is besides the point. Those who drink revel in the knowledge that they were inspectors once, and young.