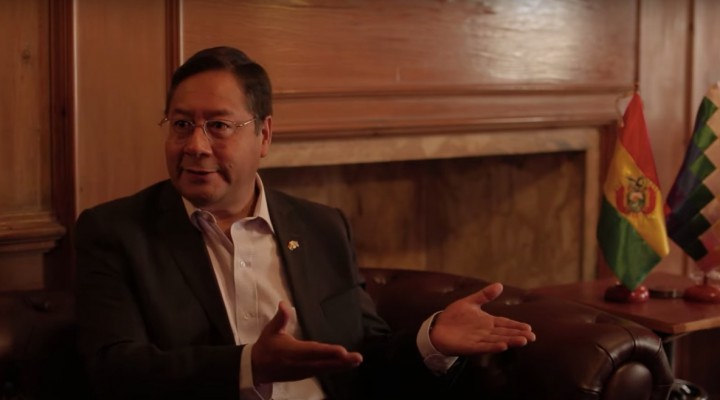 “It is clear to us that South America, Latin America has to stop being the backyard of the United States.” – Bolivian President Luis Arce talks to MintPress.

Bolivian President Luis “Lucho” Arce did not pull his punches when asked by MintPress News last week what he thought about U.S. interventions in his region: “The message that we give to Mr. Biden is that he should continue being president of the United States and let all the presidents of Latin America be presidents of our countries.” Arce made those comments during a sit-down interview conducted with MintPress at the Bolivian Embassy in London.

“The only people who can generate policies to solve our problems are the Latin American countries themselves,” he said, adding: “It is clear to us that South America, Latin America has to stop being the backyard of the United States.”

Much to the disappointment of the U.S. government, Arce was elected president of Bolivia last year in a landslide, helping return the Movement to Socialism Party (MAS) back to power after 11 months in opposition following a U.S.-backed military coup in November 2019.

Since the election of Evo Morales in 2006, Bolivia has been a global leader in fighting for an alternative vision of the world, and has drawn the attention of political movements from across the planet.

Arce is relatively rare in the MAS hierarchy, whose upper echelons tend to be filled with working class activists from trade-union or peasant backgrounds. Born into a middle-class family in the country’s capital, La Paz, Arce originally trained as an accountant before studying economics at the University of Warwick in the United Kingdom. Drawn to Marxism from a young age, he nevertheless spent much of his earlier life as a public official in neoliberal administrations, working in the Central Bank of Bolivia, where he gained a reputation as an extremely capable bureaucrat. As such, he is seen within the MAS as more of a “thinker” than a “doer.”

“I became a socialist by reading the books of Marx and Lenin,” he told MintPress, but he was keen to stress that his beliefs became stronger after he was able to implement socialist-style policies that helped his country. “Consequently, I am not only a socialist by reading, but by conviction.” “I am convinced that at some point everyone is going to become a socialist,” he added.

During his time as Minister of Finance (2006-19) under President Evo Morales, the country’s first indigenous leader, Arce oversaw a period of impressive and unusual growth, stability and prosperity. Inflation-adjusted GDP per capita increased by more than 50% over just 13 years. This was achieved by radically breaking with past governments’ policies and going against the advice of the United States government, World Bank and International Monetary Fund. A key goal of the Morales administration was to renationalize the country’s oil and gas industries, an achievement that increased revenues from $731 million to $4.95 billion.

Unlike in many historic Latin American economic booms, however, the benefits were felt by the entire population, as Arce and Morales implemented a wide range of policies designed to benefit the working classes. As a result, poverty fell by 42% between 2006 and 2019, with extreme poverty declining by 60%. Unemployment similarly plummeted.

A coup and a landslide

Morales won a controversial fourth term in office in October 2019, defeating his closest challenger by over 10 points. However, the country’s powerful U.S.-backed right-wing opposition cried foul, claiming (falsely) that the contest was rigged. Amid opposition street protests and a widespread campaign of terrorism, the military took to the streets, forcing Morales and many other senior MAS officials to flee the country. As Arce told MintPress:

One of the objectives was to finish off one of the last bastions of the left in the region; one that was successful both economically and socially, like no other. But the coup wasn’t only to overthrow a progressive government but also about lithium, gas, and Bolivia’s [other] natural resources.

Arce further revealed how a number of neighboring countries’ governments were also involved in Morales’ overthrow:

This is the case with the governments of Mr. Macri [Argentina] and Lenin Moreno [Ecuador], who were involved in sending weapons and equipment to the police during the coup; that is, as soon as the coup began, they were receiving help with this material. That was not by chance; it was a premeditated thing.

The military’s handpicked successor was Jeanine Añez, a little-known senator whose party received only 4% of the vote in October. Añez gave the country’s police and military immunity from prosecution during the “re-establishment of order,” a decision that was effectively a mandate for murder. These forces immediately exploited this legal protection, massacring marchers demonstrating against the military coup.

Despite insisting that she was merely an “interim president,” Añez immediately set about radically reorienting the country’s economic and foreign policy. Within one month, the coup government was privatizing state resources, taking out huge, unpayable loans from the IMF, pulling the country out of progressive regional organizations, and allying itself to the United States and Israel.

It also established new death squads to hunt out and destroy the MAS and anyone who opposed the new government’s rule, going so far as to arrest hospital workers who treated their victims’ gunshot wounds. However, because of the decentralized nature of the MAS, persecuting the movement’s leaders did little to break the group up and organized opposition to her rule increased throughout 2020. This culminated in a paralyzing general strike in August, something that forced her to concede to new elections.

As the MAS candidate, Arce swept to power in a landslide, receiving almost double the votes of their nearest challengers; and, since then, Arce’s government has set to work undoing the damage caused to the economy by 12 months of dictatorship.

The right-wing opposition attempted to organize another military coup, using U.S. mercenaries, just days before the election. However, the project collapsed before any serious action was taken.

Arce has faced many challenges during his first year in office, not least a rampaging pandemic and the chaos in which the economy was left. However, he sees Bolivia’s future as one that should be integrated with other like-minded countries in Latin America. “We can fight alone,” he said, “But we will advance faster if we go with several countries in an alliance.” Many in Washington will be dismayed at the thought of a united, forward-thinking Latin America, something they have been expressly trying to prevent for nearly two hundred years.

Pablo Navarrete is a journalist and documentary filmmaker. He is the founder and co-editor of Alborada, an independent voice on Latin American politics, media and culture.