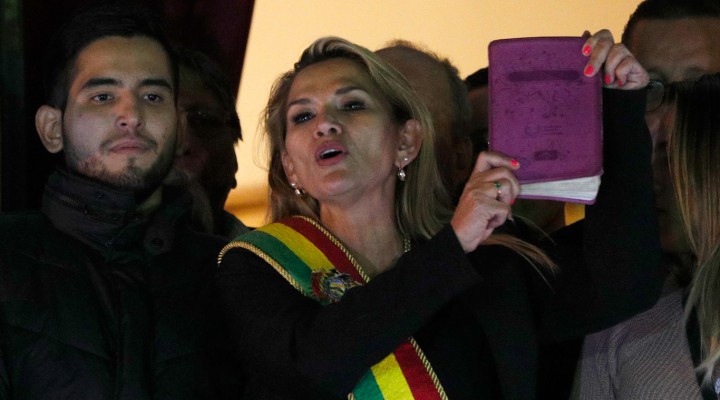 In her last days in office, US-backed strongwoman Jeanine Añez is attempting to push through judicial reforms that could help her in the coming months should she face trial for her crimes.

MPN– Almost exactly one year after he was overthrown in a U.S.-backed military coup, former Bolivian president Evo Morales is set to return to his homeland. Earlier this week, a Bolivian court threw out terrorism charges leveled by Jeanine Añez’s coup government against Morales. Today Senator-Elect Andronico Rodriguez, a senior official from the Movement to Socialism (MAS) Party, announced that he would return on November 9, the day after Luis Arce is sworn in as president of the republic.

MAS won a landslide victory on October 20, receiving over 55 percent of the popular vote in a five-way election. So comprehensive was the result that the State Department felt compelled to congratulate the MAS on their victory in a “peaceful” and “credible” election, despite the fact that it supported Morales’ removal in November. As president from 2006 to 2019, Morales grew the Bolivian economy while also greatly reducing poverty, illiteracy, and hunger.

The election result was a crushing defeat for Añez, whose administration’s claims to be an interim custodian of democracy despite ruling with an iron fist, quashing dissent and massacring those protesting her rule. After postponing elections multiple times citing a public health threat from COVID-19, Añez was finally forced to concede after a weeks-long summer general strike brought Bolivia to its knees.

On Monday, the country’s legislative assembly decided to charge her and a number of other officials from her government, including the notorious Arturo Murillo, with ordering the massacres of protesters in Senkata and Sacaba. Just before those events, Añez announced that security services would be pre-exonerated of all crimes during what she called the “re-establishment of order.” Medea Benjamin reported from the scene for MintPress, describing how churches were turned into makeshift morgues, with blood running from the pews. Dozens of people were killed.

Añez took to Twitter to express her outrage at being charged. “MAS is recovering its habit of prosecuting those who think differently,” she said. “That is why it must be reminded that democracy is not only the rule of the majority. Also, it is the government adjusted to the law and it is the government that respects freedom.” She did not reference her role in the killings.

In her last days in office, Añez also appears to be attempting to push through judicial reforms that could help her in the coming months should she face trial for her crimes. She took to Twitter to present a draft bill to amend laws on conciliation and arbitration, in her words, “seeking to incorporate mediation in the resolution of conflicts,” something that will doubtless be in her future.

Añez was in no conciliatory mood last November, however, when she was handpicked by the military to become the leader of what she called an “interim government.” A hardline Christian conservative who had previously labeled the country’s indigenous majority “satanic” individuals who should not be allowed to live in cities, she came to the presidential palace brandishing an oversized bible and shouting that God had returned to the government.

Under her rule, the MAS was persecuted, its leaders charged with sedition and terrorism, with many (like Morales) forced to flee the country. Her government also immediately began shutting down media outlets and intimidating foreign human rights observers.

One final victim of the interim government died today, as miners’ union leader Orlando Gutiérrez, who had been beaten up by a right-wing crowd during last week’s election, succumbed to his injuries at a La Paz hospital. Gutiérrez emerged as one of the most vocal and charismatic opponents of Añez’s rule, organizing mass resistance nationwide.

Praying for another coup

Bolivia’s far-right have not taken their fall from grace well. Luis Fernando Camacho, who received only 14 percent of the vote in the presidential election, began crying on camera at his defeat. On Monday he cried fraud again, yet few appeared to heed his calls. Many of his followers held a prayer session outside a military base in Santa Cruz, beseeching the army to intervene as it did in November. Yesterday, Colonel Esteban Arce Leon recorded a video threatening to “act” if the MAS did not “respect” the armed forces. “Democracy is still fragile, some pro-coup forces are not ready to accept the will of the Bolivian people,” remarked MintPress’ Ollie Vargas from La Paz.

Bolivian military officer threatens to 'act' if the army isn't 'respected' by politicians. His face uncovered & name stated openly in the video. Democracy is still fragile, some pro-coup forces are not ready to accept the will of the Bolivian people. pic.twitter.com/RJnkXE1H2B

Nevertheless, the strength of public sentiment to overturn the coup added to the highly organized popular classes, means that any attempt to overthrow democracy twice in a year will be met with committed resistance. The forces of power in Bolivia have shifted, as illustrated by the return of Morales. The boy will soon be back in town.

Feature photo | Jeanine Anez, center, wearing the Presidential sash and holding a Bible, addresses the crowd from the balcony of the Quemado palace after she declared herself interim president of the country, in La Paz, Bolivia. Juan Karita | AP