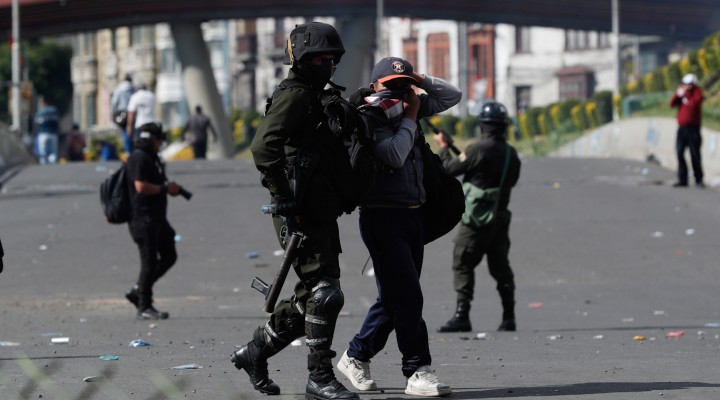 Since its establishment, HRW has consistently been criticized for being an agent of U.S. foreign policy, employing former U.S. government officials in key positions and displaying bias against governments unfriendly to the United States.

MPN- Human Rights Watch (HRW) has condemned a general amnesty for over a thousand Bolivians persecuted under the one-year dictatorship of Jeanine Añez. Yesterday, the Washington-based human rights organization decried the plan to drop all charges against people resisting the government as “opening the door to impunity.” Its Americas director, Jose Miguel Vivanco, said that the new law “undermines victims’ access to justice and violates the fundamental principle of equality before the law.” HRW alleges that a handful of anti-coup demonstrators carried out serious crimes, such as arson or kidnapping, while opposing the regime, thus making general amnesty seriously problematic.

New President Luis Arce won an overwhelming electoral victory in October after a citizens’ revolt paralyzed the country and forced Añez to hold an election. Human Rights Watch notes with concern that this new decree “suggests that anyone prosecuted by the Áñez government for actions during social protests had their rights violated,” something that many consider to be obvious and uncontroversial.

“Human Rights Watch is criticizing the Bolivian government for lifting the charges against leftists who were persecuted by the former coup regime (seriously). This is why Bolivians are suspicious of these U.S. NGOs,” reacted Bolivian journalist Ollie Vargas.

Human Rights Watch is criticising the Bolivian government for lifting the charges against leftists who were persecuted by the former coup regime (seriously). This is why Bolivians are suspicious of these US NGOs. https://t.co/pV8My0u9FU

An odd position for a human rights org

A layperson might expect one of the best known human rights organizations in the world to celebrate the acquittal of over a thousand innocent people charged with “crimes” such as reporting on massacres in a way that displeased the government, hospital workers treating the regime’s victims, or calling Añez a “dictator” in WhatsApp conversations. Yet HRW strongly supported the coup as it was taking place, insisting that President Evo Morales was actually “resigning” of his own accord, and merely “traveling to Mexico” rather than fleeing at the barrel of a gun.

HRW’s executive director, Ken Roth, made a series of public statements on social media expressing his delight, even as security forces took over La Paz, massacring civilians and overthrowing a democratically-elected president. Roth also described the coup approvingly as an “uprising” and a “transitional moment” for Bolivia, while presenting Morales as an out-of-touch “strongman.” For Roth, Morales was “the casualty of a counter-revolution aimed at defending democracy…against electoral fraud and his own illegal candidacy,” falsely alleging that Morales had ordered the army to shoot protesters.

As Roth was making his pronouncements, Añez was signing a new law that gave security forces complete immunity for killing dissenters. HRW described this as a “problematic decree,” as if Añez had merely used insensitive language. The organization also attempted to hide who were the perpetrators of the ensuing massacres, telling readers that “nine people died and 122 were wounded” during a Cochabamba demonstration, but refusing to fill them in on who was dying and who was shooting.

Even in yesterday’s 2,800-word report, published 16 months after the incident, the word “coup” is completely absent. Instead, HRW states (emphasis added) that Morales “was forced to resign on November 10, 2019, after the commanders of the armed forces and the police asked him to step down.” Morales, however, made it clear at the time that he was leaving only to avoid a bloodbath.

HRW also continues to describe Añez as the “interim president” — her own, propagandistic word for her role — rather than “dictator,” and maintains that Morales’s election was “controversial” because of “allegations of electoral fraud.” This is despite the fact that the allegations were immediately debunked by independent statisticians. Last month, HRW demanded that Donald Trump be prosecuted because he promoted false theories of a “stolen election” in the U.S. Yet, in Bolivia, HRW itself is doing exactly the same thing — and based on just as shaky evidence.

A brief and brutal fascist interlude

Elected in 2005, Morales was the first leader in the country’s history to come from its indigenous majority. During his 14 years in office, his administration reduced poverty by 42% and extreme poverty by 60%, halving unemployment and increasing real GDP per capita by 50%. Taking the country down a more socialist path, he fostered links to like-minded neighboring countries such as Ecuador, Nicaragua, Cuba and Venezuela, and was sharply critical of U.S. actions abroad. In October 2019, he won an unprecedented and controversial fourth term by over 10 points. However, sectors of the U.S.-backed Bolivian right-wing cried foul, alleging fraud, with the military and the police using the ensuing chaos to justify overthrowing him.

The military handpicked Morales’s successor, Añez, a little known senator from a far-right party that received 4% of the vote. A hardline Christian conservative, Añez sparked controversy by declaring the country’s indigenous majority as “satanic” and arguing that they should not be allowed to live in cities. She immediately started crushing dissent, targeting followers of Morales, media outlets, and human rights observers.

Añez also began privatizing the economy and reoriented the country’s foreign policy away from an independent path and towards the United States. Despite calling herself an “interim president,” she repeatedly canceled elections, leading many to believe she was attempting to stay in power indefinitely with help from the military, which ruled the country directly for much of the 20th century. However, a nationwide general strike in August shut the country down, forcing her to agree to an October election.

Morales was banned from running. But Luis Arce, his former economy minister, was elected in a 27-point landslide, gaining almost twice the votes of his nearest challenger.

Unfortunately, this sort of behavior from Human Rights Watch is far from unusual. Headquartered in NYC, with a branch on D.C.’s Pennsylvania Avenue, the organization was originally established in 1978 as Helsinki Watch, an American group dedicated to exposing the crimes of Eastern Bloc countries and monitoring their compliance with the Helsinki Accords.

Its founder, Aryeh Neier, is a libertarian fundamentalist who equates the very idea of economic or labor rights with oppression, writing that they are “profoundly undemocratic.” “Authoritarian power is probably a prerequisite for giving meaning to economic and social rights,” he added. Thus, under this interpretation of rights, the Morales administration’s actions in reducing poverty, hunger and labor insecurity are not achievements, but black marks against it.

Since its establishment, HRW has consistently been criticized for being an agent of U.S. foreign policy, employing former U.S. government officials in key positions and displaying bias against leftist governments unfriendly to the United States. Vivanco himself penned a much-derided report on human rights in Venezuela, which, in an open letter, over 100 Latin American experts claimed “did not meet even the most minimal standards of scholarship, impartiality, accuracy, or credibility.” And while constantly describing Venezuelan leader Nicolas Maduro as a “dictator,” in May, Vivanco called Bolivia under Añez’s rule a democracy.

HRW worked hard to legitimize the U.S.-, British-, and Brazilian-backed coup. With this new report, it appears as if it is still trying to turn the clock back, showing that it all too often places Western imperial interests over liberty for oppressed peoples.

Feature photo | Masked police detain a supporter of Evo Morales after they launched tear gas at a massive funeral procession that was marching into La Paz, Bolivia, Nov. 21, 2019. Photo | AP

0 thoughts on “Human Rights Watch Watches Out for US’ Bolivian Friends, Condemns Amnesty for Political Prisoners”