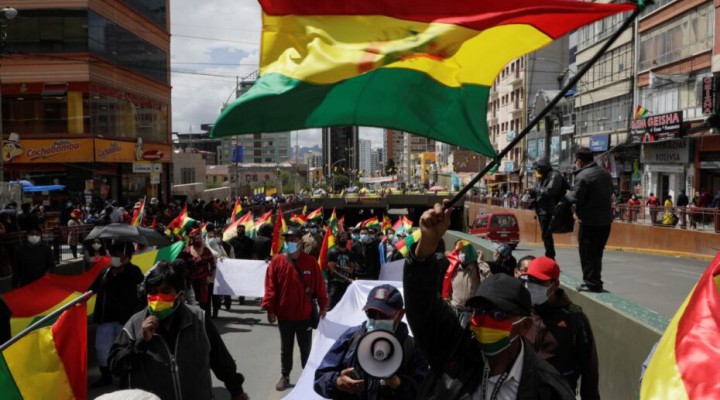 If human rights were really a concern for those opposing Anez’s arrest, the same critics would have intervened on an equal level over the violence unleashed in the aftermath of the coup.

Can an arrest be considered an “opposition crackdown” if the individual is a U.S.-backed coup plotter who served as alleged “acting president” in the ousting of former Bolivian President Evo Morales? According to mainstream media, the designation is legitimate. Leading headlines from Europe have been swift to legitimise statements from Jeanine Anez, former interim president, or dictator, depending on how one views the foray by the Trump administration to meddle in Latin America by replicating the foreign interference of past decades.

Anez, who was not handcuffed at the time of her arrest and escorted by the Bolivian police for questioning, downplayed her role in the U.S.-backed coup. “This is an abuse,”Anez claimed. “There was no coup d’etat, but a constitutional succession.”

But the White House under former U.S. President Donald Trump stated otherwise, in a thinly veiled statement which signalled involvement, and a warning to other Latin American countries. “These events send a strong signal to the illegitimate regimes in Venezuela and Nicaragua that democracy and the will of the people will always prevail,” Trump had said. “We are now one step closer to a completely democratic, prosperous, and free Western Hemisphere.”

The UN and Human Rights Watch (HRW) have lent their support to Anez and other Bolivian officials involved in the 2019 coup. HRW’s Americas Division Director, Jose Miguel Vivanco, stated that the arrest warrants issued for Anez and other officials do not contain evidence of terrorism.

If the “crackdown” discourse was reversed, the recent amnesty granted by the Bolivian government to over 1,000 people rounded up by Anez’s government speaks volumes about which political entity embarked upon state terrorism and persecution. Not to mention the violence unleashed upon Bolivia’s indigenous population in the aftermath of the coup, as well as the massacres of Sacaba, for which the former Police Commander Jaime Zurita is being charged.

What is missing is the political context which human rights organisations mostly prefer not to wade through. While Morales lost support over his decision to stand for a fourth presidential term, Anez herself lacked any political majority in Bolivia and it was through state-sanctioned terror that the interim period was governed, at the expense of Bolivia’s indigenous. In October 2020, Bolivians voted the MAS back into power, restoring order under a new presidency and repudiating U.S. influence.

Standing against what the coup sought to achieve, which included bringing Bolivia under the clutches of the International Monetary Fund, is what the international community should have done. The monopoly instigated by the U.S. of what constitutes a democracy has been subverted by the U.S.’s own purportedly “democratic” involvement in foreign intervention to bring dictatorships into action.

Reconstructing democracy, for Anez, meant a government without indigenous representation, despite the fact that over 60 percent of Bolivians are indigenous. Pacification, for the right-wing coup, was built upon ostracization and oblivion. If the indigenous are not represented, the government can deny their existence. Opponents of Morales and the MAS heeded Anez’s call, burning the indigenous flag in the streets as a prelude to the violence unleashed in the aftermath.

If human rights were really a concern for those opposing Anez’s arrest, the same critics would have intervened on an equal level over the violence unleashed in the aftermath of the coup. But that wouldn’t do for the likes of Brazilian President Jair Bolsonaro, for example, who expressed concern over the arrest and failed to spare any for Anez’s victims – the indigenous, same as Bolsonaro’s targets and victims. Bolivia has upheld its promise to deliver justice over foreign intervention through a democratic framework, and its critics would do well to heed the process.

0 thoughts on “Bolivia – Justice After the U.S.-Backed Coup”