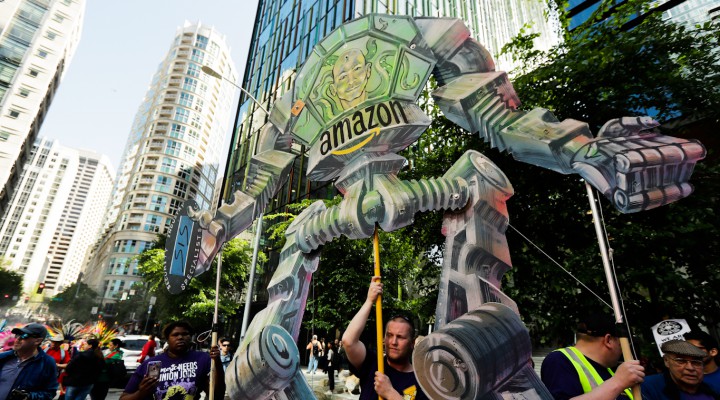 A report by Public Citizen found that “Amazon is engaged in price gouging on products it sells directly” through its Amazon Essentials line, with products like facemasks and corn starch seeing elevenfold increases in price.

MPN- A new report from advocacy group Public Citizen details how retail giant Amazon “misled the public, law enforcement, and policymakers about price increases during the pandemic,” raising their prices on essential products “to levels that would be considered violations of price gouging laws in many states.” The prices of many products in high demand during the pandemic jumped by over 1,000 percent when compared to this time last year.

As accusations of price gouging began, Amazon blamed “bad actors,” declaring in an official statement that, “there is no place for price gouging on Amazon,” committing itself to “working vigorously” to ensure fair pricing, and “collaborating with federal, state, and local law enforcement agencies” to “hold price gougers accountable” and to protect the interests of their customers.

Price gouging has no place in Amazon's stores. Read about our efforts here to protect our customers. https://t.co/oDDcya4R6J

Yet Public Citizen’s report found that “Amazon is engaged in price gouging on products it sells directly” itself, through its Amazon Essentials line. Disposable face masks and corn starch were the most inflated prices, jumping elevenfold from earlier in the year. Below is a list of ten Amazon Essential products tracked, including the percentage the items increased in cost. Similar price rises were tracked among third party sellers on the platform as well.

While there is no federal law protecting the public from the practice, price gouging is illegal in 35 states, with some states deeming that increasing prices by just 10 percent constitutes breaking the law.

Thanks in no small part to increased profits from sales, Amazon founder and CEO Jeff Bezos has seen his wealth almost double during the pandemic, from $113 billion in March to $206 billion today, according to the Institute for Policy Studies, who calculated that America’s billionaire class of 467 plutocrats have seen their wealth spike by nearly a trillion dollars since lockdown began on March 18. Much of this has been down to an enormous tax break for the ultra-wealthy that the Trump administration snuck into its first coronavirus relief bill. Bezos, who retook the title of the world’s richest individual from Microsoft co-founder Bill Gates late last year, has said that he is so rich that he can only imagine spending his wealth by plowing it into space travel.

Yet even as he becomes the world’s first individual to reach a net worth of $200 billion, Bezos’ employees are struggling just to eat or avoid homelessness. According to the company’s own data, a great number of Amazon employees rely on SNAP (food stamps) just to eat. That number is as high as one third of all Amazon workers in Arizona, with company employees nationwide far more likely than most to need to use food stamps. Instead of giving his employees a pay rise, “arch-philanthropist” Bezos decided to start a charitable foundation for them, asking the public to donate money to help them pay for basic necessities. And when staff at Bezos-owned Whole Foods Market asked for higher pay and better working conditions, the company instead gave them a free t-shirt that called them “hardcore” “heroes” for working through the pandemic.

Price gouging is widely considered a highly immoral practice, akin to profiting off the desperation and suffering of others, with some of the only people willing to publicly defend it being economics professors and highly-paid columnists in corporate media. Professor Lili Carneglia of Valencia College, Florida, for instance, writing in libertarian think tank FEE, argued that neighborhood 7-Elevens charging $20 for a case of water after a hurricane is a good thing, claiming without them there would be shortages in supply (although, she admits, she is unable to convince most of her students). Likewise, the Boston Globe’s Jeff Jacoby claims that price gouging is not a problem, but a solution to a problem, suggesting that it actually helps consumers.

Public Citizen did not agree. “During emergencies, people are scared, desperate, and in need. Price gouging is an insidious exploitation of the most vulnerable. There is no excuse for the most successful corporations preying on vulnerable consumers,” it concluded.

Feature photo | Protesters carry a figure of Amazon.com founder Jeff Bezos depicted as a giant robot, at a protest during a march for immigrant and workers rights, May 1, 2019, on May Day in downtown Seattle. Ted S. Warren | AP