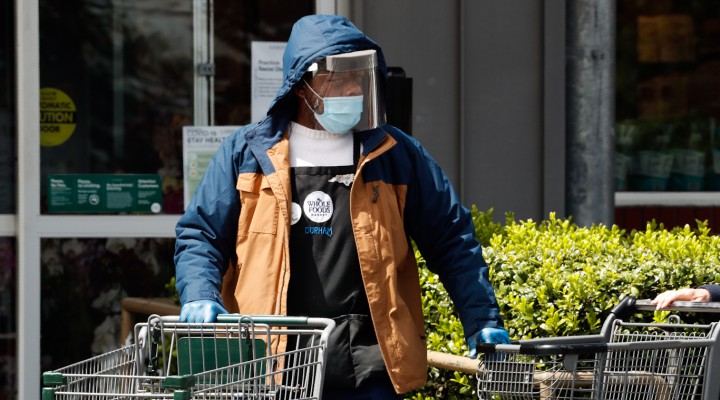 As corporations like Amazon and Whole Foods spend fortunes on advertising campaigns thanking their workforce for “heroic” service, they refuse to provide even basic protective gear or sick pay and ruthlessly crush any internal dissent.

MPN– In the wake of the ongoing COVID-19 coronavirus pandemic, premium supermarket chain Whole Foods has redesigned its uniform, giving employees shirts that designate them as “heroes” and “hard core.” The revamp is one of many actions large corporations across the world have taken to symbolically thank their workers amidst the global crisis.

Whole Foods Workers: “Can we have hazard pay, PPE, and ensure that no one is dying just so you can make a profit?”

However, the move has not been appreciated by many of Whole Foods’ 91,000 staff who work in 500 stores across North America, especially as the retail behemoth (owned by world’s richest man and Amazon CEO Jeff Bezos), has failed to provide staff with adequate wages or protective equipment, endangering their lives. A new petition set up by activists alleges that workers have to clean the store without protection or training and are unable to regularly wash their hands.

Megan Murray, a Whole Foods store worker in Philadelphia, writes that many of the precautionary procedures put in place are laughably poor. For instance, while employees have their temperature checked each day, the contactless reader is hopelessly inaccurate, measuring greatly different temperatures every time she uses it. Even if workers are diagnosed in-store with a high fever, they do not receive paid time off and are merely sent home. Only if they have tested positive for the virus or have been instructed to quarantine by a doctor do they qualify. But getting tested for COVID-19is extremely difficult, and finding the money to pay for a doctor harder still.

While those who study to work in a hospital or a nuclear power plant understand that there is an unwritten assumption that, during a crisis, they might need to risk their lives to prevent greater disaster, this is not the case for retail workers. “It feels like we’ve been drafted into war,” Murray said. Many believe it is only a matter of time before they get sick. But most have little choice; without any safety net, many in low-paying jobs deemed essential must continue working for poverty wages or risk homelessness and starvation.

Bezos’ employees are poor. Really poor. In Arizona, for instance, Amazon’s own data suggests that one third of his employees depend upon food stamps to put food on the table. Other retail workers are in the same boat. Earlier this month, a 27-year-old Maryland grocery store worker died after contracting COVID-19. Giant Foods sent her mother her last paycheck: $20.64.

No one GAF about Ellen's privilege pampers a$$ stuck in her mansion.

Show me @ellen working the lines @ the grocery store. NO mask, NO gloves. Then I might care.

Let's call it what it is. She's not a hero. She's a sacrifice demanded by the elites.

Bezos’ empire is also stepping up its efforts to prevent unionization of its employees, who are pushing for less hazardous working conditions. Amazon fired an employee who led a mass walkout protest at its New York warehouse over the company’s cavalier attitude towards the safety of its employees, who asked for more personal protective equipment. The fired worker alleges that management ignored their pleas and even hid positive COVID-19 cases. The retaliation was condemned by the state’s Attorney General, Letitia James, who said, “it is disgraceful that Amazon would terminate an employee who bravely stood up to protect himself and his colleagues.” Whole Foods is using a big data-powered heat-mapping tool to monitor employees’ movements and discover secret unionization attempts.

Here's an idea for @JeffBezos: Instead of handing out t-shirts, maybe, as the richest man on Earth, you can provide all of your workers with paid sick leave, hazard pay, protective gear, and a safe and sanitary workplace. https://t.co/PXBANp0BTY

Thanks to the world relying heavily on food and deliveries from his employees, Jeff Bezos’ personal wealth has surged by around 10 percent during the pandemic, leading to him recapturing Bill Gates’ title as the world’s richest individual. Despite this, he is calling for your donations to help Amazon employees in deep poverty, establishing the Amazon Relief Fund last month. The idea that he could share some of his own burgeoning wealth to help his struggling employees appears not to have occurred to him, claiming that, “the only way that I can see to deploy this much financial resource is by converting my Amazon winnings into space travel. That is basically it.”

As corporations like Amazon and Whole Foods spend fortunes on advertising campaigns purportedly thanking their workforce for their “heroic” service, while at the same time failing to provide basic protective gear or sick pay, ruthlessly crushing any internal dissent, their faint praise will likely not inspire their employees. Indeed, Whole Foods employees are staging a mass, wildcat strike on May 1. It is doubtful whether Bezos will consider this action quite as heroic.