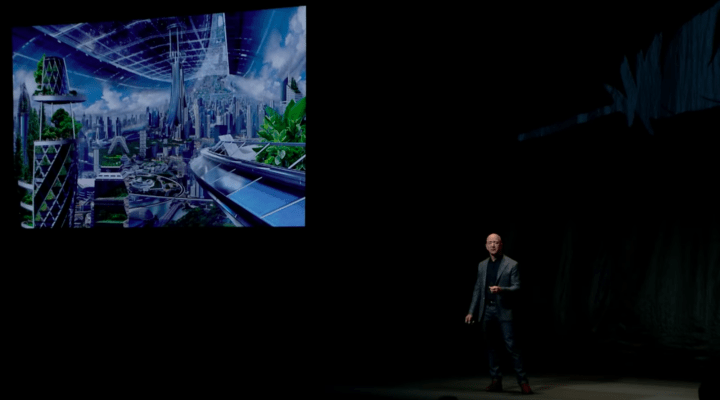 “Guess what the best planet is in this solar system?” asked Amazon CEO Jeff Bezos at a recent media event on his Blue Origin space program.

“It’s easy to know the answer to that question,” he continued. “We’ve sent robotic probes like this one to all of the planets in our solar system. Now, some of them have been fly-bys, but we’ve examined them all. Earth is the best planet. It is not close. This one is really good.”

Bezos then went on to discuss his plan to ship humans off of the best planet in the solar system and send them to live in floating cylinders in space.

Bezos claimed that the growing human population and growing energy consumption will force us to make a choice between “stasis and rationing” and “dynamism and growth”, and claimed that the latter item in his dichotomy is possible only by moving humans off the planet.

“If we’re out in the solar system, we can have a trillion humans in the solar system, which means we’d have a thousand Mozarts and a thousand Einsteins,” Bezos said. “This would be an incredible civilization. What would this future look like? Where would a trillion humans live? Well it’s very interesting, someone named Gerry O’Neill, a physics professor, looked at this question very carefully and he asked a very precise question that nobody had ever asked before, and it was, ‘Is a planetary surface the best place for humans to expand into the solar system?’ And he and his students set to work on answering that question, and they came to a very surprising–for them–counterintuitive answer: No.”

Bezos went on to describe how the limited surface areas, distance, and gravitational forces of the other planets in our solar system make settling on those planets impractical and cost-prohibitive, while constructing giant space cylinders closer to Earth which can hold a million people is far more practical. These cylinders would spin to replicate Earth’s gravitational pull with centrifugal force.

Here are some illustrations Bezos used in his presentation to show us what these “O’Neill colonies” might look like:

“These are really pleasant places to live,” Bezos said. “Some of these O’Neill colonies might choose to replicate Earth cities. They might pick historical cities and mimic them in some way. There’d be whole new types of architecture. These are ideal climates. These are short-sleeve environments. This is Maui on its best day, no rain, no storms, no earthquakes.”

No rain? No weather? Just big, spinning cylinders floating monotonously in space? A trillion divided by a million is one million, which means that the best idea the richest man in the world can come up with for the future of our species is to fill our solar system with a million of these floating homogenized space malls.

“If we build this vision, these O’Neill colonies, where does it take us? What does it mean for Earth?” Bezos asked. “Earth ends up zoned, residential, and light industry. It’ll be a beautiful place to live, it’ll be a beautiful place to visit, it’ll be a beautiful place to go to college, and to do some light industry. But heavy industry, polluting industry, all the things that are damaging our planet, those will be done off Earth. We get to have both. We get to keep this unique gem of a planet, which is completely irreplaceable–there is no Plan B. We have to save this planet. And we shouldn’t give up a future of our grandchildren’s grandchildren of dynamism and growth. We can have both.”

Now, if you look at the behavior of Jeff Bezos, who exploits his employees and destroys his competitors, and who some experts say is trying to take over the underlying infrastructure of our entire economy, you can feel reasonably confident that this man has no intention of leaving “this unique gem of a planet”, nor of having the heirs to his empire leave either. When you see this Pentagon advisory board member and CIA contractor planning to ship humans off the Earth’s surface so the planet can thrive, you may be certain that he’s talking about other humans. The unworthy ones. The ones who weren’t sociopathic enough to climb the capitalist ladder by stepping on the backs of everyone else.

And make no mistake, when Bezos talks about saving the planet for “our grandchildren’s grandchildren”, he’s not just talking about his heirs, he’s talking about himself. Bezos has invested large amounts of wealth in biotech aimed at reversing the aging process and cracking the secret of immortality.

This is the sort of guiding wisdom that is controlling the fate of our species, everyone. The world’s most ambitious plutocrat envisions a world in which, rather than evolving beyond our destructive tendencies and learning to live in collaboration with each other and our environment, we are simply shipped off into space so that he can stretch out and enjoy our beautiful planet. That’s his best idea.

Bezos’ incredibly shallow vision for humanity reminds me of something Julian Assange said at a 2017 London festival via video link about the way Silicon Valley plutocrats are trying to become immortal by finding a way to upload their brains onto computers.

I mean, damn. First of all, how stupid do you have to be to overlook the fact that science has virtually no understanding of consciousness and doesn’t even really know what it is? Even if these idiots find a way to upload their neurological patternings onto some AI’s virtual simulation, it’s not like they’d be there to experience it. It would just be a bunch of data running in a computer somewhere, mimicking the personality of a dead person and experienced by no one. People who believe that all there is to them is their dopey mental patterns have not spent any time whatsoever exploring what they are, and have no idea what it is to be human. The fact that anyone would think they could become immortal by digitizing their churning, repetitive personality patterns is crazy, and the fact that they’d want to is even crazier.

People who think this way should shut up and learn about life, not rule the world in a plutocratic system where money translates directly to political influence. People who think that humans can be happily unplugged from the ecosystemic context in which they evolved, the ecosystemic context of which they are an inseparable part, and people who think they can become immortal by uploading their wanky personalities onto a computer should shut the fuck up, spend some time alone with themselves, maybe try some psilocybin mushrooms, and learn a bit about what it means to be human. They certainly shouldn’t be calling the shots.

Earth is our home. It’s what we’re made for. The earth went through a lot to give you life. Sparks had to catch, oceans had to freeze, billions of cells had to survive endless disease, all of these amazing things had to happen just right to give you life. You belong here. You are as much a creation of the earth as the air you breathe. You may feel like a singular organism but you’re actually as much a singular organism as one of the many billions of organisms that make up your body. You and earth are one. And because you evolved on earth, you are perfectly adapted to earth and it is perfectly adapted to you. It yearns for your breath as you yearn for its breeze on your face.

We absolutely have the ability to transcend our unhealthy tendencies as a species which, when you really look at them, are merely creations of a mind that feels alone and separate and like it is in a constant fight for its life. If we just put down our mental swords for a hot second and learned to channel our creativity into the thriving of our society and our ecosystem instead of into killing and out-competing one another then we will be okay. The way out of this is the way towards health. For example, once women have been given back even the most basic rights of sexual sovereignty such as birth control and access to terminations as they have in most western countries, birth rates fall below replication levels. Women’s own internal bodily wisdom makes the problem of overpopulation moot if given half a chance just to make decisions on behalf of her own body.

Another example. People lament the lack of jobs due to AI and automation but we actually desperately need people to do less. We need a whole lot of people doing nothing, not using the roads every morning and evening, not producing widgets that no one needs and creating advertising campaigns to brainwash people into buying them anyway, just to have them end up in the ocean or leaching heavy metals into the earth. Having a whole lot of people doing nothing for more of their week would take the strain off of our health systems as the single biggest factor in disease is stress. Studies show that stress also shrinks your brain and lessens your creativity and innovation too, so all the punitive-minded libertarians out there who are worried that we won’t progress as a species if we start sharing resources around to people who aren’t doing things that traditionally made money because we’ll be too relaxed can chill too. We don’t need to crack the whip to get people to make beautiful innovations. Humans are at their best when feeling playful and relaxed. Nearly all the technological advances of the past came from people who had a lot of leisure time due to their privileged status. Releasing humans from 9 to 5 slavery would be the fastest way to slow our resource consumption and take pressure off of all our systems and would have the added benefit of making us smarter, funnier, more creative and more innovative too.

And for that matter, having every idea and innovation be required to make money is also killing us. We need the ability to fund things that will not make profit. How many times have you been in a conversation and someone’s come up with an idea that will solve a major environmental, energy or health problem and no one’s got excited because it will never get off the ground because it will never make money? Fully disappearing a problem never made anyone any money. Healthy people, for example, never spend a dime at the doctors. The way out of this is detaching human innovation from money and allowing solutions to flourish without the imposition of also having to turn a profit.

These are merely three things I can think of that will dramatically improve our collective ability to reverse this extinction event and all we have to do is get saner, stop punishing each other, start sharing and start collaborating. The only issue we have as humans is that a handful of highly competitive, highly sociopathic and yet incredibly mediocre people have all the power to build our future for us with virtually no input from anyone else. Because all the power in the form of all the money has been allowed to pool into the hands of those most willing to do whatever it takes to get it, we have just a few ruthless yet surprisingly dumb individuals calling the shots on the future of all living beings. The competitive mindset that gave rise to Jeff Bezos is the exact opposite of the kind of collaborative, harmonious mindset we’ll need if we’re going to overcome the challenges we face on the horizon.