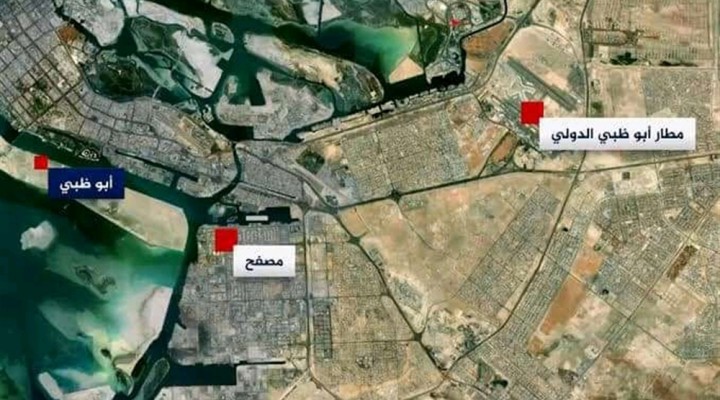 Israel is incapable of protecting the UAE. It is only interested in cashing in.

Israeli are flocking to the Emirati capital Abu Dhabi these days. After Prime Minister Naftali Bennett’s visit last month, President Isaac Herzog’s plane flew him across Saudi airspace to the same city’s airport on an official visit, where he was accorded a festive reception his hosts, first and foremost Crown Prince Sheikh Mohammed bin Zayed.

The visit, which the Israeli president called ‘historic’, comes a few days after the UAE was subjected to ballistic missile and drone strikes originating from Yemen. Ground and air defence systems failed to intercept them, enabling them to achieve some of their objectives by disrupting air traffic at Dubai and Abu Dhabi airports and setting fuel tanks ablaze at one of state oil corporation ADNOC’s refineries.

The Israelis are like leeches who suck their victims’ blood and are hard to shake off. As soon as they are given an opportunity, however slight, they exercise their talent for extortion, sowing sedition, and creating problems, crises, and instability for the countries and governments in the region that have normalized relations with them. Hence the swarm of visits to the UAE, which more than 100,000 Israelis have entered since the Abraham Accords were signed under US pressure in September 2020. These visitors have brought more problems than profits and gains for the host country. The Hebrew presses is rife with stories of theft, fraud, drug use, and money laundering by Israeli tourists.

The honoured Israeli guest Herzog made a point of condemning the Houthi missile attacks against the UAE, denouncing any ‘violation of its sovereignty by terrorist groups’, and affirm Israel’s eagerness to help meet its ‘security requirements.’

We don’t know what protection the Israeli occupation state could offer the UAE that would succeed where the US superpower failed. When Houthi missiles targeted Abu Dhabi’s al-Dhafra base, which houses 3,500 American and British personnel and dozens of Patriot and THAAD air defence systems, those troops fled to the safety of their bunkers.

Israel’s army, about whose ‘invincibility’ its governments used to boast, has been defeated and humiliated several times since 2000 when it scurried out of South Lebanon to cut its losses. It was beaten again in the July 2006 war on Lebanon, and a third time in last May’s war on Gaza, when then-premier Netanyahu begged President Joe Biden to intercede with the Egyptian government to secure a halt to hostilities on the eleventh day.

Is this army, located over 1,500 km away from Abu Dhabi, capable of protecting it and providing it with security? Or of thwarting a hypothetical Iranian attack as Israeli leaders aver?

They peddle delusions to the UAE and all the other Arab countries that have signed peace accords with them. They mistrust them and seek to extort them and take their money, in the name of allying fears — shared by some Emiratis and most Israelis — about the growing power of Iran and its allies.

Israeli military analyst Alon Ben David revealed in an article in Maariv on Sunday that the Israeli government turned down a deal to supply the UAE with $3.5 billion worth of arms including air defence systems for fear that their secret technology would be leaked to Iran and the Houthis. This prompted the UAE to turn to South Korea for alternatives.

This refusal demonstrates two things: that the UAE’s Israeli ‘ally’ and ‘protector’ does not trust it to safeguard these systems and their secrets, and this it does not rule out the possibility of a third party invading and occupying the country and acquiring them.

Another reason that may explain Israel’s refusal is that it does not want to get directly or openly involved in the Yemen war. It knows that if it provides the UAE with military or security support it can expect retaliatory Houthi missile strikes against it or its shipping in the Red Sea. Yemen is about the same distance from Eilat it is from Abu Dhabi. Those who have the capacity to strike at the former would not hesitate to strike at the latter when deemed necessary.

The Israeli president opened his country’s pavilion at the Dubai Expo on Monday – which the Houthis have threatened to target if the UAE and its proxy forces continue interfering in the fighting Ma’rib and Shabwa. They may be even more tempted to target it now.

The UAE has committed two strategic mistakes in recent years: joining the war on Yemen in 201, and signing the Abraham Accords and speeding into normalization with Israeli. The first mistake has caused it heavy losses financially and in terms of and morale. The second has created an existential threat to its security and stability, especially considering Israel’s successive defeats, the US’ impending drawback from Middle East after its humiliating exit from Afghanistan, and the imminent conclusion the Vienna nuclear talks — from which Iran gains whatever the outcome.

It is still possible for the UAE to extricate itself from both predicaments. It might only be able to do so gradually. But the quicker the better for itself, before it is too late.

0 thoughts on “Flocking to Abu Dhabi”