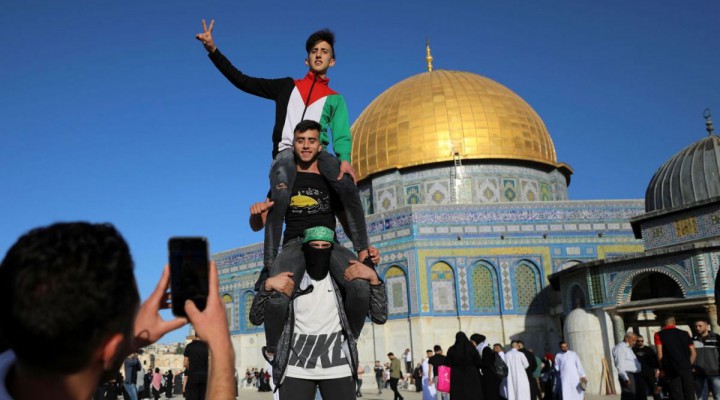 For all its military might and brutality, ‘superpower’ Israel suddenly feels embattled and vulnerable

Now we know the contents of the ‘target bank’ Israeli commanders spoke about when they launched their latest assault on Gaza: residential tower blocks, schools, shelters for the elderly, and other predominantly civilian targets.

The Gaza Strip may be tiny and impoverished and the most densely populated place on earth. But it has the advantage of a determined and capable resistance under resolute leadership that enjoys solid popular support. Size and resources do not matter so much.

The past four days have shown that despite their overwhelming military predominance, it is the Israelis who feel embattled and besieged. The was best illustrated by the way Ben Gurion airport was closed and flights diverted to Ramon airport in the south, only for Hamas missiles to target it too. The Israeli security establishment never imagined the besieged Palestinians in Gaza could develop such a potent missile capability – a huge intelligence failure. The Israeli ‘superpower’ suddenly found itself cut off from the outside world due and feeling like the weaker party.

Israeli officials have been lying continuously about the course of developments, but two lies, in particular, are worth noting.

First, that their army is poised to mount a ground invasion of the Gaza Strip when they know full well that this would be a gift to the resistance and prove hugely costly. They learned that lesson when their most hawkish hawk ever, Ariel Sharon, fled from Gaza with his tail and 7,000 settlers between his legs under the blows of the resistance.

The second lie is the claim that Israel spurned appeals from Hamas for a cease-fire. My first-hand information indicates that the opposite is true The Israelis contacted Cairo and Doha to ask them to mediate a truce, but Hamas and Islamic Jihad replied that they do not trust any assurances offered by Netanyahu and are ready and willing to fight on.

Netanyahu started this escalation as a ploy to improve his domestic political prospects, but he is now desperate for a cease-fire: not just because of the missile surprise from Gaza but also the looming civil war on the internal Israeli front –with Palestinian citizens of Israel rising up in Jaffa, Haifa, Umm al-Fahem, Nazareth, Lydda, Ramleh, Acre, Tabaria, Beer-as-Sabaa and elsewhere in solidarity with Occupied Jerusalem, Sheikh Jarrah and Gaza.

This resurgence of resistance on both sides of the Green Line, coupled with the descent into irrelevance of Mahmoud Abbas’ Palestinian Authority (PA), is a nightmare for the Israeli authorities. It marks the beginning of the end of the Zionist dream of being able to subjugate the people of Palestine indefinitely and ultimately eliminate them.

Those who were deluded by this illusion, Arab regimes included, would do well to start reconsidering.

0 thoughts on “Turning the tables in Palestine”