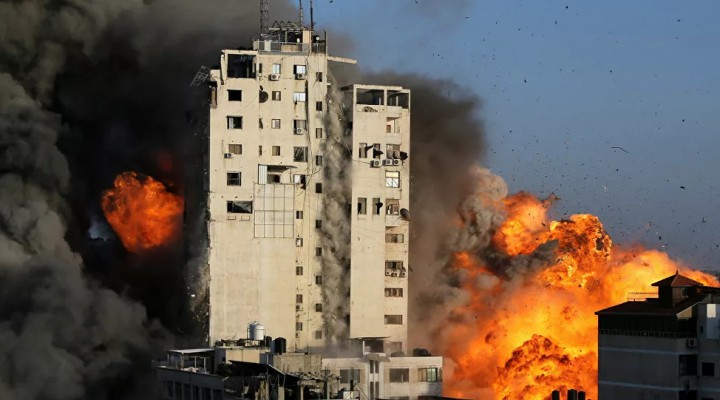 As the Israeli-Palestinian conflict erupts once again this week, Russia makes the right call for a broader framework of negotiations for efforts to find a lasting peace.

Moscow is calling for the Middle East Quartet to convene in order to facilitate dialogue. The Quartet comprises the United Nations, European Union, the United States and Russia. Let’s not be under illusions that such a forum is ideal or can easily succeed in solving a seven-decade-old conflict.

But what it has got in its favor is that such a forum broadens out negotiations and mediation. And that could be key to unlock the dead-end impasse which itself fuels more conflict and more suffering.

What we can say for sure is that the past nearly four decades of the so-called peace process led by the United States as the self-appointed sole mediator have been an abject failure. Such a US-led process has only created evermore deteriorating conditions for Palestinians while emboldening evermore Israeli occupation of contested land.

That’s because the American pretense of being an “honest broker” is a charade. The reality is that Washington is a sponsor of Israel and its systematic violations not only against Palestinians but also against neighboring Arab countries. Washington’s relentless indulgence of Israel is based on safeguarding its own selfish geopolitical interests in the oil-rich Middle East region and the vital importance for maintaining the petrodollar system. This American indulgence gives Israel an impregnable arrogant sense of impunity.

In short, Washington is very much part of the problem, not the solution. This was seen again this week when US President Joe Biden stated his “unwavering support for Israel’s right to self-defense” even while the Israelis were killing Palestinian families from airstrikes. Biden didn’t mention Palestinian right to self-defense, or the fact that their rockets fired into Israeli territory were in response to recent Israeli evictions of Arabs from East Jerusalem.

Irish political commentator Declan Hayes says that the impasse in the Middle East conflict is the major source of perennial instability and tensions across the region. He says that American sponsorship of the Israeli state prolongs this impasse. This sponsorship is in the form of vast military support to the tune of $3.8 billion every year. But also from the American propagation of “Zionist myths” which covers up the illegal nature of the Israeli occupation of Palestinian homeland.

These “myths” include the oft-made claim that Israel was formed from “a land without people”.

Says Hayes: “How does Israel explain the abandoned mosques and churches by the Jordan River where John the Baptist baptized Jesus? Who used to worship there? What does Israel make of the cactus hedges that were used as garden fences and that can still be seen all over Israel proper? Who planted them? Who used them as garden fences?”

Another myth, he says, that goes unchallenged is “a people without land”, meaning that Israel was supposedly established for displaced Jews from around the world to settle in. Hayes comments: “That does not square up with the testimony of David Ben-Gurion, the first Israeli prime minister who formed the state in 1948, who said he had a contented life in Poland and that it was well-organized Zionist gangs who attacked the Poles, not Poles who attacked Jews. Can we not accept that Zionists like Ben-Gurion already had land but they, as modern conquistadors, were simply hungry for more.”

Hayes also points out that thousands of American and Russian Jews have opted to settle in Israel owing to generous state financial concessions for house building, not because they were “stateless”.

The unquestioning fawning by Washington towards Israel and its foundational distortions have only led to ever-increasing annexation of Palestinian lands. Under so-called American “mediation” the rights of Palestinians have been relentlessly eroded.

Nearly 40 years of American peace-dealing in the Middle East has been a disaster that has all but suppressed the historic rights of Palestinians to their native lands. This disaster has been manifest in repeated eruptions of violence with no foreseeable peace.

Russia’s proposal of a broader forum is to be welcomed as it potentially brings better balance to dialogue, providing Palestinians the opportunity to make their historic case to the international community, and obliging Israel to account for its occupation.

Russia’s multilateral forum for the Middle East has got to be better than America’s monopoly on “mediation”. The latter has been a cruel joke.