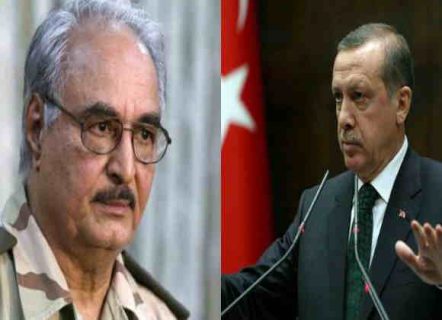 By scuppering the cease-fire talks, Erdogan’s enemies are luring him into a war he needs to avoid

Hopes that Russia and Turkey could broker a permanent cease-fire in Libya at talks in Moscow were scuppered when Gen. Khalifa Haftar refused to sign the agreement they negotiated and promptly decamped from the Russian capital.

Turkish President Recep Tayyip Erdogan was enraged, and vowed to teach the “putschist” warlord “the lesson he deserves” if he continues attacking the internationally-recognised government of Fayez Sarraj.

The collapse of the talks marks the failure of Erdogan’s bid to avoid a military confrontation and find a peaceful and face-saving way out of a showdown in Libya courtesy of Russia. But the Russians, who secretly provide Haftar with military and diplomatic support while publicly proclaiming neutrality, are doing exactly what they did and are doing in Syria: counting on the time factor and on their strategy winning out in the long run.

The reason for Haftar’s walkout is simple. With the support of Egypt, the UAE, Russia, the US and France, he has the upper hand militarily. He controls most of southern and eastern Libya including the so-called Oil Crescent, and is closing in on the capital Tripoli and the city of Misrata. He will not agree to any deal that jeopardises any of these gains, especially after his recent capture of the strategic central city of Sirte without a fight (he bought off the Salafi militias that hold sway in the town).

Regardless of who is trying to fool whom in the bloody drawn-out saga in Libya, it can be said with confidence that the biggest dupe so far has been Erdogan. He is being lured with eyes wide open into a trap deliberately set by Haftar’s sponsors. The reason for this, in the words of one former aide, is that he only listens to people who tell him what he wants to hear. This is a dangerous flaw, not only for Turkey but the entire region.

Erdogan’s big problem is that he has few friends left in the Mediterranean basin, whether on its Arab or European shores. His only allies are the Muslim Brotherhood, Qatar and Sarraj’s government in Libya, which beseeched him for military assistance. The Turkish president faces a sea of enemies, including major global or regional powers, plus mounting Israeli-backed American economic pressure aimed at bringing him to his knees.

So how does Turkey – admittedly a powerful country power in its own right that should not be underestimated – deal with this predicament?

One clue was provided by Erdogan’s advisor Yasin Aktay in an article in the pro-AKP newspaper Yani Safak. He called for a rapprochement between Turkey andEgypt, arguing that the two countries have more reason to co-operate than quarrel, and suggesting the current crisis could serve as an opportunity to mend Turkish-Egyptian-Libyan relations. The article, which may have been inspired by Erdogan himself, signals a sharp break with previous thinking. It implies that Turkey realises it is in a fix and needs to undertake a comprehensive policy rethink, in line with the pragmatism Erdogan has demonstrated amply in other comparable cases.

Another sign of new thinking was the first publicly-acknowledged meeting, held in Moscow a few days ago, between the second most powerful men in Turkey and Syria, security chiefs Hakan Fidan and Ali Mamlouk. They were brought together by President Vladimir Putin to discuss Idlib and northern Syria. The reporting of this meeting breaks new ground for both sides, especially in terms of Turkish pride. Ankara used to refuse to admit to holding secret high-level security meetings with Damascus.

The collapse of the Moscow talks dooms next weekend’s Berlin conference on Libya, which Erdogan was banking on to avoid war. Making good on his pledge to teach the “putschist” general a “lesson” would mean wading into a quagmire in Libya that could prove even bloodier and deeper than the Syrian one.

Erdogan could go to war in Libya as he did in Syria. The big difference is that in Syria, he was supported by a 65-country alliance led by the US and its lieutenants the UK and France and with cover from the Arab League. And Syria is a neighbouring country. The situation in Libya is very different. It is 2,000 km away and he would be waging war there without friends. Indeed, he would be confronting much the same coalition there that supported him in Syria, and it will not stand idly by and watch its client Haftar face annihilation.

Moreover, Turkey’s friends are weak and constitute a burden on it, at least in militarily, at a time when Erdogan’s enemies are multiplying and proliferating. That includes inside Turkey, where former senior associates are deserting him and his AKP party. Ahmet Davutoglu – who formulated Turkey’s ‘zero problems’ foreign policy – has broken away to form a rival party, and Ali Babacan – credited with overseeing Turkey’s economic renaissance – is also launching a new party in partnership with former president Abdullah Gul.

Erdogan would do well to heed the advice of Yasin Aktay (if it is not his own advice), start listening to voices other than those within his entourage that are pushing him to the brink, and reach out eastwards to his Syrian, Iraqi and Iranian neighbours. Together they could face up to the machinations of the US and Israel who are at the source of all the region’s crises and troubles.

Today it is Fidan and Mamlouk meeting. Tomorrow it could be foreign ministers Mevlut Cavusoglu and Walid al-Nuallem, and after that an Erdogan-Asad summit. To dismiss that prospect is to underestimate Russian statecraft and fail to see the impasse or trap into which Turkey and its president are currently being led. The turning of this anticipated new conciliatory leaf could be lead to the stabilisation of the entire region.

0 thoughts on “Turkey and the Libyan trap”