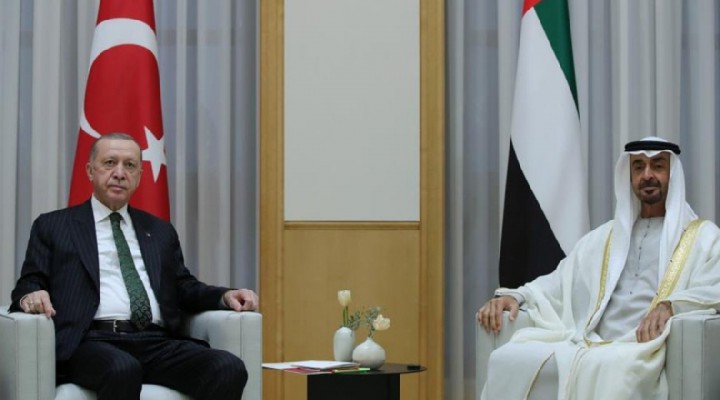 Turkish President Recep Tayyip Erdogan arrived in the UAE capital Abu Dhabi on Monday on an official visit billed as aimed at developing trade and political relations. This follows a stormy period of disputes and recrimination between the two sides: including Erdogan’s accusation that the UAE sponsored the foiled 2017 coup attempt against him, and his threat to withdraw his ambassador in response to the UAE’s signing of the so-called ‘Abraham Accords’.

Erdogan’s government is facing mounting economic problems, including an inflation rate of 36% and a 40% fall in the value of the national currency. So he has set aside his antagonistic policies and shelved his ambition of using Islamist political parties to revive the Islamic Caliphate state under his leadership. His focus now is on looking for money and trade deals to halt the decline of his and his AK party’s popularity amid growing support for opposition parties ahead of the 2013 presidential and parliamentary elections.

The UAE leadership was aware this, and seized on the opportunity to revive channels of dialogue. It sent its national security advisor Sheikh Tahnoun Bin-Zayed to Istanbul last summer to hold out the prospect of a $10bn investment fund. He was followed in November by Sheikh Mohammed bin- Zayed, the crown prince of Abu Dhabi and de facto ruler of the UAE, accompanied by a huge trade and media delegation that was accorded a festive welcome.

Erdogan prepared for his visit by publishing an article under his by-line in Dubai’s Khaleej Times affirming his desire to double the volume of Turkey’s trade with the UAE, which currently stands at around $10bn annually. His visit is likely to result in agreements to boost commercial exchanges to include military deals such as the export of advanced Bayrakdar drones, the jewel in the crown of Turkey’s military industry.

The visit is liable to stoke political sensitivities in the Gulf region and the wider Middle East, especially in countries like Egypt. Erdogan’s efforts to restore full relations with Cairo — which included muzzling Istanbul-based Egyptian opposition TV channels and curbing the activities of the Egyptian Muslim Brotherhood — came to nothing. The Egyptian leadership does not trust the Turkish president and his policies, which officials in Cairo describe as duplicitous.

Qatar, which established strategic relations with Turkey — including establishing a Turkish military base on its soil — will be wary of the visit and the rapid development of Turkey-UAE relations. Qatar’s supposed ‘reconciliation’ with the UAE remains ephemeral, despite their signing of a Saudi-sponsored agreement last year and the meeting held by the two countries’ leaders in Beijing on the side-lines of the Winter Olympics. Qatar has sent Erdogan more than $50bn in aid and investments over the years, and cannot afford to pay more given the financial burdens of preparing to stage the 2022 World Cup.

The same can be said for Saudi Arabia. Erdogan has repeatedly announced that he will soon pay a visit to the kingdom, but no confirmation has been given or date set by the Saudi side. Gulf rulers often feign friendship while keeping their true feelings to themselves.

Erdogan will certainly return from Abu Dhabi with large trade and investment deals in his baggage — and possibly also the Dubai-based Turkish mafia boss Sedat Bakr, who used to post videos implicating members of Erdogan’s entourage and family in corruption, money-laundering and other crimes. Bakr went quiet and disappeared from view after relations between the two countries began improving. When regimes reconcile, oppositionists pay the price. The history of the Middle East is filled with comparable examples.

Rapprochement with Israel and the improvement of trade, security, and military ties with it is a common denominator between the UAE and Turkey. But they differ over Syria. The UAE has reopened its embassy in Damascus and its foreign minister went there to invite President Bashar al-Asad for a visit. Turkey continues to occupy Syrian territory and support the armed opposition in Syria.

But will Erdogan’s visit rescue Turkey’s economy and currency and his party’s re-election prospects? It is hard to tell at this early stage. But whatever deals and investments he is awarded will be dependent on Turkish political concessions, especially over Yemen and Iran. On whether Turkey is willing to intervene on the side of the Saudi-UAE coalition via arms deals or the despatch of drones and troops. Turkish intervention cannot be ruled out, despite the country’s long history of losses and defeats in Yemen.

After Kazakhstan, the color revolution era is over

0 thoughts on “Erdogan in Abu Dhabi”