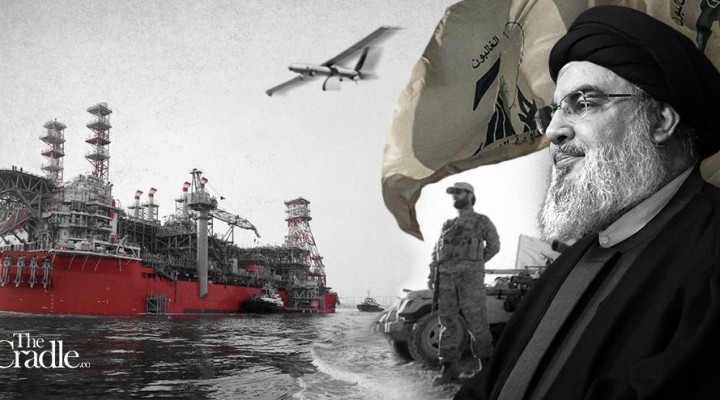 How close is the Levant to war? Hezbollah’s leader says it all comes down to whether Lebanon is permitted to extract its own energy resources to end the country’s economic crisis. And not in the far future, but right now.

In his speech last Wednesday, which coincided with the arrival of US President Joe Biden to occupied-Palestine, Hezbollah Secretary General Hassan Nasrallah may have set the “zero hour” for the next and imminent war with Israel.

“The Lebanese have only two months to take advantage of the golden opportunity available to extract gas and oil in the Mediterranean, otherwise the cost will be very high after that.”

This was one of the few times Nasrallah has gone on the offensive, and he made clear the resistance was prepared to liberate Lebanon’s gas and oil wealth. His speech came two weeks after Hezbollah sent three drones over the Israeli-erected gas platform in the Karish gas field – opposite the Lebanese-Palestinian maritime border – and transmitted photos of the platform to an operations room somewhere in southern Lebanon.

Why now? Nasrallah is well aware that the US and its European allies are being defeated in Ukraine, in a war that can be prolonged painfully and can bog down western attentions for the indefinite future.

This represents a truly golden opportunity to liberate the Lebanese wealth buried in the depths of the Mediterranean, and to employ the capabilities of the resistance to achieve this lofty goal. ‘Martyrdom in a war of dignity and honor is nobler than death by starvation.’ It’s a sentiment the Lebanese can understand better than most these days.

Lebanon is not on the path to collapse; it has already collapsed as a state. The Lebanese can no longer find bread, and they have lost hope in securing their fuel, electricity, medicine and basic primary services needs, while their children are facing starvation, disease and siege.

Lebanon is currently begging the International Monetary Fund (IMF) to obtain a humiliating loan of $3 billion which is not enough to solve any of its problems. Meanwhile, there are $600 billion worth of gas and oil reserves off Lebanon’s coastline that can solve all its crises, pay off all its debts, and make Beirut more prosperous than any oil-rich Arab capital in the Persian Gulf.

In his speech, Nasrallah stressed that all options are open to confront the Israeli enemy on land, sea and air, and revealed that Hezbollah is monitoring all gas and oil platforms along the occupied Palestinian coast.

This monitoring, it transpires, may have taken place to prepare for a foreign aggression targeting the resistance and Lebanon. According to Axios, in late June, intel experts from 30 countries, including Israel, Saudi Arabia, Bahrain, the UAE and Qatar, met under the auspices of the US State Department, to formulate ways to target Hezbollah.

Unlike most Arab leaders, the Israelis take Nasrallah’s words very seriously. He is the rare regional leader who does not fear war, has the ability to ignite it if warranted, and has won every war in which he engaged: starting with the liberation of southern Lebanon from the Israeli occupation in May 2000, to the Israeli aggression in July 2006, to the war against ISIS in Syria and Iraq in the last few years.

The Israelis, who have long mocked Hezbollah’s oft-repeated threat to “retaliate in the appropriate place and at the appropriate time” against Tel Aviv’s repeated aggressions against Syria and Lebanon, have still not responded to Hezbollah’s dispatch of three drones that flew over the Karish gas platform on 2 July.

The Israelis have swallowed the insult, because they are well aware that whoever sent the drones is eagerly awaiting Tel Aviv’s response, and has prepared to confront them with tens of thousands of precision missiles and armed suicide drones.

Without doubt, the Lebanese resistance is able to disrupt Israel’s extraction of oil and gas in the Mediterranean, at a time when the world, and Europe in particular, is facing a severe crisis in securing energy supplies. It is also capable of striking deep inside Israel and destroying most of its infrastructure, including water, electricity, airports, and all its critical military targets.

During Israel’s month-long aggression against Lebanon in July 2006, Nasrallah imposed the formula of bombing “Haifa, and beyond Haifa.” The phrase has stuck, and essentially means that Hezbollah can reach beyond targets that Israel cannot yet fathom.

This equation still exists, and since 2006 it has been updated by adding Umm al-Rarashash (Eilat) and Dimona in the Negev to it. The fresh new formula that Nasrallah announced in his last speech by threatening to “hit Karish, and beyond Karish, and beyond beyond Karish,” will increase the Israelis’ anxiety and fear, because missiles and drones are waiting for the green light to start a regional war from Lebanon.

For a year now, Lebanon has been plunged into darkness and has been waiting for the fulfillment of false US promises to allow it to be supplied with electricity from Jordan and gas from Egypt. We do not think that it will wait in humiliation for months or years for a loaf of bread, for there is no death after death.

“Let him try,” as Nasrallah said, and he will certainly find what he does not expect. Lebanon today is different from Lebanon forty years ago. The Lebanese have nothing left to lose but hunger, poverty, suffering, and the corruption of the political elite allied to the United States. On the other hand, there is a lot that Israel will lose.