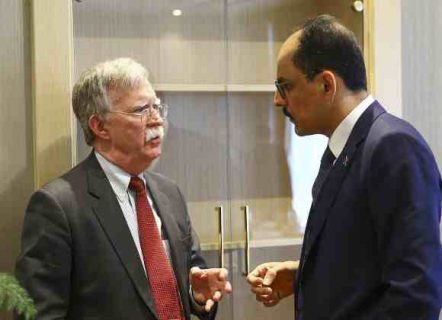 The refusal of Turkish President Recep Tayyip Erdogan to receive visiting US National Security Advisor John Bolton — who left for home with his head bowed in humiliation — raises many questions about the unexpected crisis that has erupted in American-Turkish relations. How serious is it? What steps might the Turkish president take next in north-eastern Syria? And will he make good on his threat to attack the Syrian Democratic Forces (SDF) based there.

The real causes of this crisis remain unclear and subject to speculation. It comes just ten days after US President Donald Trump announced, after a telephone conversation with Erdogan, that he would pull all US troops out of Syria within three months.

The problem, according to leaks in the American media, began when Bolton told Erdogan’s aides in preliminary meetings that the US opposed to any Turkish operation against its Kurdish allies in north-eastern Syria and would not withdraw its forces until Ankara guaranteed their safety and promised not to attack hem.

Erdogan launched a fierce attack on Bolton in response to these statements. He categorically denied he had made any commitment to Trump not to take action against the SDF, who he regards as ‘terrorists’ with whom there can be no compromise.

US Secretary of State Mike Pompeo – on an eight-country Middle East tour taking in the Gulf states, Egypt and Jordan – had claimed that Erdogan gave an undertaking to Trump to protect the Kurds. This would have been a very strange promise to make: a tough ask from a Turkish leader who deems the Peoples’ Protection Units (YPG) that form the backbone of the SDF to be a terrorist organisation and the Syrian branch of the Kurdistan Democratic Party (PKK). Unless, of course, something huge was offered in return: the partition of Syria or regime-change in Damascus, for example, or the extradition of the cleric Fethullah Gulen who is accused organising the recent failed coup in Turkey. But there has been no sign of anything like that happening.

One thing is certain. Someone spoiled the dish that Trump and Erdogan cooked up in north-eastern Syria, and the most likely culprit is Benjamin Netanyahu. It was at a joint press conference in occupied Jerusalem with his friend the Israeli prime minister, before he went to Ankara, that Bolton made the withdrawal of US forces from Syrian conditional on Turkey safeguarding the Kurdish forces. Netanyahu fiercely opposed Trump’s original decision, and mobilised all the Israel Lobby’s resources in the US to oppose it.

The question now is what will Erdogan do next? Will he carry out his threat to bomb SDF forces east of the Euphrates? And who will be able to stop him? The US or Russia?

The US continues to control the airspace over north-eastern Syria. It has given no indication that it intends to relinquish that control even if it were to withdraw its ground troops. Should it do so, the vacuum would be filled by the Russians. And they would be unlikely to allow the Turks to launch air raids against the Kurdish forces without a prior agreement that does not conflict with the demands of their Syrian allies in Damascus.

We disagree with the view that this dispute between the US and Turkey is not serious but a mere ‘show’. The US has changed its policy under Israeli pressure. Trump is being forced to reverse his decision to abandon his Kurdish allies in Syria and withdraw the troops that were protecting them, giving in to Netanyahu and a range of figures in the US government and military establishment.

Erdogan’s demand to be given a free hand in north-eastern Syria – and for the US to withdraw all the heavy and advanced weapons it gave to the Kurds on the pretext of fighting ISIS – is no longer accepted by Washington. That leaves the Turkish president with no option other than to put all his eggs in the Russian basket, and to work closely with President Vladimir Putin.

Erdogan made an intriguing remark on Sunday, suggesting that a force drawn from all sectors of Syrian society should be formed to combat and overcome Kurdish ‘terrorism’. Did he mean the Syrian Arab Army too?

Erdogan is a politician. He changes stance according to his judgement of the best interests of his country, his party, and his personal regional leadership ambitions. He could well spring some surprises in the days and weeks to come as he seeks a way out of this crisis. Let’s see what happens at his impending meeting with Putin in the next few days.

This is all being watched closely by the Syrian authorities in Damascus. They are well aware that developments on the ground, and the growing disputes between their enemies – whether the war of annihilation between the Nusra Front and its opponents in Idlib, or between the Turks and the Americans –- are all working to their advantage.

0 thoughts on “The Turkey-US Crisis”