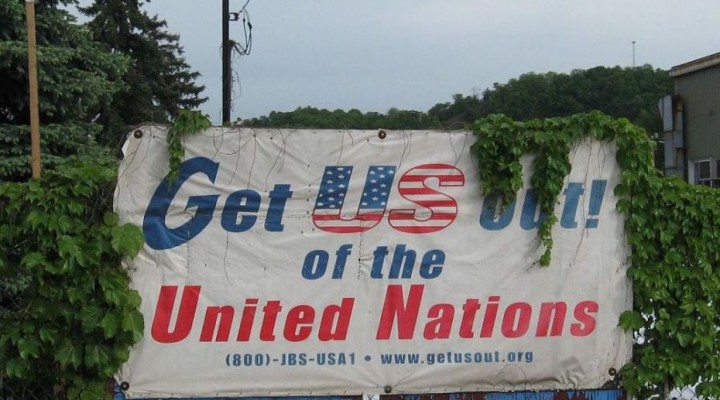 Trump has conveniently used the coronavirus as a reason to push his far-right agenda with regard to China’s increasing international clout.

The Trump administration, which is fast becoming a regime, has dusted off some old tracts of the anti-Communist John Birch Society to reignite the far-right’s war against the United Nations, including the World Health Organization (WHO). To paraphrase the old U.S. Civil War song about slavery abolitionist John Brown – whose body was rejoiced as “a mouldering in the grave” – the body of John Birch, for whom the John Birch Society was named, should also be left “a mouldering in the grave.”

Birch was a World War II-era fundamentalist Baptist missionary in China who volunteered to become an anti-Communist spy for the Office of Strategic Services (OSS), the predecessor of the Central Intelligence Agency, to jointly cooperate with Chinese Nationalist and Japanese occupation troops to battle against the Communist forces of Mao Zedong. Prior to his time with the OSS, Birch served as an intelligence officer for General Claire Chennault’s pro-Nationalist mercenaries, the Fourteenth Air Force, which had previously been called the Flying Tigers.

On August 25, 1945, while in the company of American, Nationalist Chinese, and Korean troops, Birch was stopped by a People’s Liberation Army patrol. Birch refused to surrender his weapon to the Communist military unit and after he began insulting the Communist rebels, a skirmish resulted, one in which Birch was shot and killed. One witness said that Birch told the young Communist peasants that if they killed him, the United States would “use the atomic bomb to stop their banditry.” The Chinese Communist guerrillas were not impressed with Birch’s “cowboy” bravado.

Birch, his brand of anti-Communism, and rejection of the U.S. wartime alliance with the Soviet Union and the Chinese Communists immediately became a cause célèbre for the American far-right. The John Birch Society, founded in 1958 in Indianapolis, Indiana by candy company magnate Robert Welch, Jr., believed that John Birch was the first casualty of World War III. Welch believed that the “Communist menace” was a sub-level international conspiracy that was ultimately led by the “Illuminati.” Welch’s conspiratorial delusions continue to find currency with Trump, his family members, and political supporters.

The Birch Society saw “Communists” hiding behind every tree and its rhetoric served as a valued life line to the “anti-Red” movement in the United States, particularly after the disgrace brought to it by Senator Joseph McCarthy and his “witch hunts” against alleged Communist in the federal government, military, and Hollywood. One of the society’s first members was Fred C. Koch, the father of Charles and the late David Koch – the infamous “Koch brothers” – who have funded various right-wing causes in the United States, including the presidential campaigns of Donald Trump. In keeping with their far-right upbringing, the Koch brothers helped fund the “Tea Party” movement, a grassroots effort that helped to lay the underpinnings of the 2016 Trump presidential campaign.

Among the longtime targets of the John Birchers and the Kochs have been the United Nations and its specialized agencies, including the WHO, the UN Educational, Scientific and Cultural Organization (UNESCO), the International Labor Organization (ILO), and others. In 1975, John Birch-oriented Republicans serving in the Gerald Ford administration – particularly White House chief of staff Dick Cheney and Defense Secretary Donald Rumsfeld – took advantage of the situation to advocate for U.S. disengagement from certain UN specialized agencies. In 1974, one of the first actions of the Ford administration was to serve notice to UNESCO that it would suspend dues payments unless certain anti-Israel resolutions were rescinded. The U.S. ambassador to the UN railed against the WHO for being concerned about public health issues in the Israeli-occupied Palestinian territories. In 1975, informed the ILO that it would formally withdraw from the organization in 1977.

The Jimmy Carter administration reversed the Bircher-influenced decisions on UNESCO and the ILO. The anti-UN fervor by the United States would return with a vengeance in the Ronald Reagan administration. It considered the most anti-U.S., anti-Israeli, and anti-South African apartheid specialized agencies to be – from most politicized to least – UNESCO, the ILO, the WHO, and the Food and Agriculture Organization (FAO). To the Reaganites, whose ranks included a number of John Birch sympathizers, the least politicized agencies were those over which the U.S. had a large say in management and direction, namely, the World Bank and International Monetary Fund (IMF).

John Birchers are consistent about one thing and that is their abject racism. Just as they condemned UNESCO and the FAO in the 1970s because they had African and Arab directors-general – Amadou-Mahtar M’Bow of Senegal and Edouard Saouma of Lebanon, respectively – they are now condemning the WHO because it has an Ethiopian director-general, Dr. Tedros Adhanom Ghebreyesus, a famed microbiologist from Ethiopia. Trump and his rabid far-right supporters have accused Dr. Tedros of being an agent=of-influence for China as part of the neo-John Birchers overall campaign to assign the cause of the coronavirus pandemic to China. The parents and grandparents of these John Birchers once blamed the “Communists” and the “Soviet Union” for being behind the fluoridation of America’s public water supply.

The Birchers even had a degree of success with the Bill Clinton administration, which withdrew the U.S. from the United Nations Industrial Development Organization (UNIDO) and the U.N. World Tourism Organization (UNWTO). Clinton’s reason for withdrawal was pure Bircher logic: they “lacked purpose” for the United States.

Today, acting under the auspices of front organizations like the Heritage Foundation and the Federalist Society – both bankrolled by the Charles Koch Foundation and the David H. Koch Charitable Foundation – the neo-John Birchers accuse China of being behind the coronavirus pandemic by intentionally or accidentally releasing the virus as a biological weapon. In lashing out at China, the far-right, including senior members of the Trump administration and Republican senators like Tom Cotton of Arkansas and Lindsey Graham of South Carolina have also placed Tedros and the “China-influenced” WHO in their gunsights.

The WHO is not the first UN agency to be singled out by the far-right as an instrument of China. The Heritage Foundation, whose white papers are often transformed into Trump administration policy, criticized the election of Qu Dongyu as director-general of FAO in 2019. Heritage blasted the UN for electing Qu as the fourth Chinese national to head a UN specialized agency. Chinese directors-general also lead the International Civil Aviation Organization (ICAO), UNIDO, and the International  Telecommunication Union (ITU).

Four months before the first coronavirus case was reported in Wuhan, China, Heritage and its neo-John Bircher allies had convinced Secretary of State Mike Pompeo, a Tea Party founder, to question Chinese influence at the UN. Heritage made several demands to its fellow-travelers in the Trump administration. They included: 1) tasking the U.S. intelligence community to report on Chinese objectives, tactics, and influence in international organizations; 2) Conduct an objective cost-benefit analysis of U.S. participation in each international organization;  3) the U.S. should focus its effort and resources on countering Chinese influence, advancing U.S. policy preferences, and increasing employment of U.S. nationals, particularly in senior positions, in those organizations whose remit affects key U.S. interests; 4) identify and carefully vet highly qualified candidates for leadership positions in international organizations well in advance of elections; 5) Counter Chinese financial and political pressure on foreign governments; 6) Press the UN, the specialized agencies, and UN funds and programs to increase employment of U.S. nationals; and 7) Elevate multilateral affairs and international organizations within the State Department by establishing an Under Secretary for Multilateral Affairs. 8) the U.S. should take all reasonable steps to ensure that an American or national of a like-minded country becomes the next International Atomic Energy Agency (IAEA) director-general.

As can be seen with Heritage’s bulletized attack on the UN, the current Trump administration attack on UN agency directors like Dr. Tedros was already in the planning stages and was part of the old John Birch playbook of either bending the UN and its specialized agencies to U.S. will or withdraw from them or cut off dues payments. Trump carried out his John Bircher-initiated orders by threatening to put a hold on U.S. payments to the WHO, even as the organization has become cash-strapped over its campaign to curb the coronavirus around the world.

On December 31, 2018, Trump pulled the U.S. out of UNESCO. It was the second U.S. withdrawal from UNESCO, Reagan having done so in 1984 after pressure was exerted on him by his own neo-John Birchers, many of them former Democrats who had been loyal to Democratic anti-Soviet war hawk Senator Henry “Scoop” Jackson of Washington. In Trump’s case, it was UNESCO’s granting of full membership to Palestine in 2011 that incurred the wrath of Trump and his administration’s court Zionists, including his son-in-law Jared Kushner. In 2018, Trump threatened to withdraw the U.S. from one of the oldest international organizations, the Universal Postal Union (UPU), which even predated the League of Nations. Trump’s anger against the UPU was part of his overall aversion to government-run postal systems.

Trump has called the WHO “China-centric” merely because its last director-general, Dr. Margaret Chan, served as health director for the Special Administrative Region of Hong Kong. She left as the WHO director-general in 2017. It matters not to the dullards in the Trump administration and his support team that Dr. Chan is a Fellow of the Faculty of Public Health Medicine of the Royal College of Physicians of the United Kingdom and was also appointed as an Officer of the Order of the British Empire by Queen Elizabeth II, far from being a “Chinese Communist” agent.

The neo-John Birchers in the Trump administration have made common cause with anti-Beijing pressure groups in Washington, including the CIA-linked Falun Gong and its propaganda outlet, the “Epoch Times” newspaper, which enjoys White House press credentials. Taiwan also maintains a formidable lobbying presence in Washington, a legacy of the old “Formosa Lobby” led by Soong Mei-ling, the wife of Nationalist Chinese General Chiang Kai-shek, who maintained the “Republic of China” on Taiwan following the rout of Nationalist forces by Mao Zedong’s Communist forces in 1949. The Taiwan Lobby has been successful in having the Trump administration intercede on its behalf after China objected to Taiwan’s participation in the WHO, ICAO, and other specialized agencies.

Trump has conveniently used the coronavirus as a reason to push his and the Birchers’ far-right agenda with regard to China’s increasing international profile and clout. China will remain a force to be reckoned with on the world stage long after the names Trump, Falun Gong, Formosa Lobby, and the John Birch Society are consigned to the trash heap of history.