HOME / WORLD / Will Artsakh (Karabagh) be the tomb of Erdoğan ? 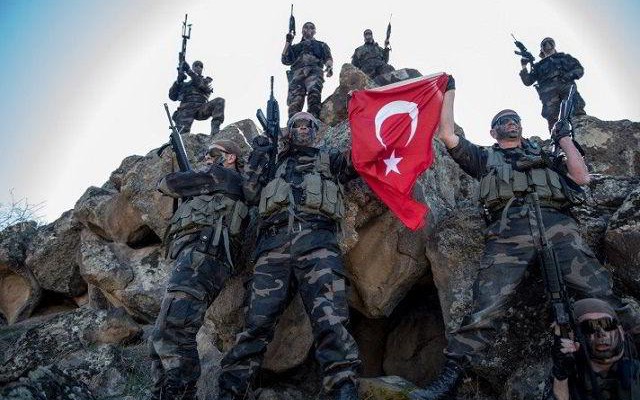 The Nagorno-Karabakh conflict certainly had its origins in the dissolution of the USSR, but it was revived by the will of the Turkish president. It is unlikely that he took this initiative without first referring it to Washington. This is also what President Saddam Hussein did before invading Kuwait, falling by ambition into the trap set for him and causing his downfall.

A very ancient conflict, frozen for the past 30 years

The Turkish people define themselves as descended from the “children of the wolf of the steppes”, i.e. as descendants of the hordes of Genghis Khan. It is composed of both “one people and two states”: Turkey and Azerbaijan. The political rebirth of the former automatically engenders the arrival of the latter on the international scene.

Of course this political renaissance does not mean a resurgence of the violence of the barbarian hordes, but this past has nonetheless forged mentalities, despite the efforts of many politicians who, for a century, have been trying to normalize the Turkish people.

In the last years of the Ottoman era, Sultan Habdulhamid II wanted to unite the country around his conception of the Muslim faith. He therefore ordered the physical elimination of hundreds of thousands of non-Muslims. This was supervised by German officers who acquired during this genocide an experience that they later put at the service of Nazi racial ideology. The Ottoman policy of purification was pursued on a larger scale by the Young Turks at the beginning of the Republic, particularly against the Orthodox Armenians [1].

Murder being an addiction, it reappeared sporadically in the behavior of the Turkish armies. Thus, in March 2014, they escorted hundreds of jihadists from the al-Nosra Front (al-Qaeda) and the Army of Islam (pro-Saudi) to the city of Kessab (Syria) to massacre the Armenian population. The jihadists who participated in this operation were today sent to kill other Armenians in Karabagh.

These massacres ceased in Azerbaijan during the brief Democratic Republic (1918-20) and the Soviet period (1920-90), but resumed in 1988 with the collapse of Moscow’s power.

Precisely during the Soviet period, in accordance with Joseph Stalin’s policy of nationalities, an Armenian region was joined with Azerbaijan to form a Socialist Republic. Thus when the USSR was dissolved, the international community recognized Karabakh not as Armenian but as Azeri. The same mistake was made in the rush in Moldova with Transnistria, in Ukraine with Crimea, in Georgia with South Ossetia and Abkhazia. A series of wars immediately followed, including that of Nagorno-Karabakh. These are cases where international law developed from an error of appreciation at the beginning of the conflicts, as in Palestine, which was not rectified in time, leading to inextricable situations.

Westerners intervened to prevent a general conflagration. However, the example of Transnistria attests that it was a step backwards in order to better jump: thus the United States resorted to the Romanian army to try to annihilate the nascent Pridnestrovie [2].

The Organization for Security and Cooperation in Europe (OSCE, then CSCE) created the “Minsk Group”, co-chaired by the United States, France and Russia, to find a solution, which it never did: Russia did not want to choose between its former partners, France wanted to play the important game, and the United States wanted to maintain a conflict zone on the Russian border. The other conflicts, created at the dissolution of the USSR, were deliberately fuelled by Washington and London with Georgia’s aggression against South Ossetia in 2008 or the EuroMaydan coup d’état aimed, among other things, at expelling Russians from the Crimea in 2014.

The attack on the Republic of Artsakh (Karabagh) by Azerbaijan and Turkey was justified by the speech of Azeri President Ilham Aliyev at the UN General Assembly on September 24. [3] His main idea was that the Minsk Group had qualified the status quo as unacceptable, but that “statements are not enough. We need action. He could not have been clearer.

In accordance with his family’s ideology, he put his opponents under the greatest burden, for example, attributing the Khojaly massacre (1992, more than 600 victims) to “Armenian terrorists”, even though it was a black operation during an attempted coup in his country; in any case, this allowed him to present in a biased manner the actions of ASALA (Armenian Secret Army for the Liberation of Armenia) in the 1970s and 1980s. He pointed out that four Security Council resolutions ordered the withdrawal of Armenian troops, playing on the homonymy between the Armenian population of Karabagh and the neighboring state of Armenia; one way of ignoring the fact that the Council also enjoined Azerbaijan to organize a referendum of self-determination in Karabagh. It accused, not without reason, the new Armenian Prime Minister, Nikol Pashinyan, of being one of the men of the speculator Gorge Soros, as if this erased what had gone before.

The conflict can only end after a referendum of self-determination, the outcome of which comes as little surprise. For the time being, it benefits those who, like Israel, sell arms to the aggressor.

The Turkish, Azeri and Pakistani armies display their unity against the Armenians.

For Erdoğan, one war too many?

Having said this, let us analyze the current conflict from another angle, that of international balances, keeping in mind that the Turkish army is already illegally present in Cyprus, Iraq and Syria; that it violates the military embargo in Libya and now the cease-fire in Azerbaijan.

Baku is organizing itself to postpone the inevitable deadline even further. Azerbaijan has already obtained the support of Qatar, which also supervises the financing of jihadists in this field of operations. According to our information, at least 580 of them have been sent from Idleb (Syria) via Turkey. This war is expensive and KKR, the powerful company of the US-Israeli Henry Kravis, seems to be involved as it is still involved in Iraq, Syria and Libya. As in the destabilization of communist Afghanistan, Israeli weapons could be routed through Pakistan. In any case, in Turkey, posters flourish placing side by side the flags of the three countries. 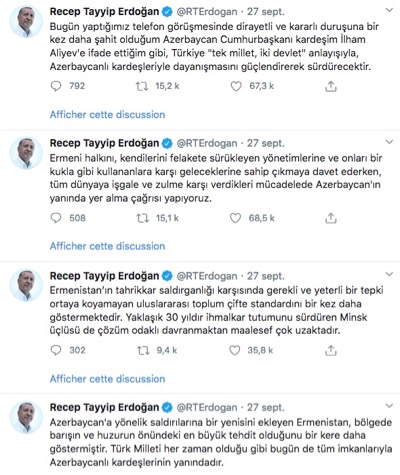 On his Twitter account, President Erdoğan wrote on the day of the outbreak of hostilities: ” – During the phone calls we had today, a wise and resolute stance, the “one nation, two states” approach, once again testifies, as I mentioned to Ilham Aliyev, the President of Azerbaijan, that Turkey will continue to strengthen its cooperation with its Azerbaijani brothers. – As we call on the Armenian people to defend their future against their domination and those who use them as puppets, we call on the whole world to support Azerbaijan in its struggle against occupation and oppression. – The international community, which was unable to provide a necessary and sufficient response to Armenia’s provocative aggression, is once again showing its double game. The trio from Minsk, which has maintained its negligent attitude for about 30 years, is unfortunately far from being solution-oriented. – By adding a new attack to the previous ones against Azerbaijan, Armenia has once again shown that it is the biggest threat to peace and tranquility in the region. The Turkish Nation supports its Azerbaijani brothers with all its means, as always. »

Even more astonishing, President Aliyev received the support of his Belarusian counterpart, Alexander Lukashenko. It is likely that he is acting in agreement with the Kremlin, which could herald a more visible Russian support for Orthodox Armenia (Russia, Belarus and Armenia are all members of the Eurasian Economic Union and the Collective Security Treaty Organization).

Strangely, Shiite Iran has not taken a position. Yet, although ethnically Turkish, Azerbaijan is the only other Shia people in the world because it was part of the Safavid empire. President Hassan Rohani had included it in his plan for a Shia Federation presented during his second election campaign. This withdrawal gives the impression that Tehran does not wish to enter into conflict with Moscow, which is officially neutral. All the more so since Armenia plays a non-negligible role in the circumvention of the US embargo against Iran.

On the Armenian side, the diaspora in the United States is lobbying intensely in Congress in order to make President Erdoğan -whose country is a member of NATO- responsible for the conflict before an international tribunal.

In the case of a tacit agreement between Moscow and Washington, this war could be turned diplomatically against President Erdoğan, now unbearable to the Big Two. Like Iraqi President Saddam Hussein, who brutally changed from valet of the Pentagon to public enemy No. 1 when he thought he had the authorization to invade Kuwait, the Turkish president may have been encouraged to take the blame.

0 thoughts on “Will Artsakh (Karabagh) be the tomb of Erdoğan ?”