HOME / WORLD / Is the Middle East on the brink of a major showdown? 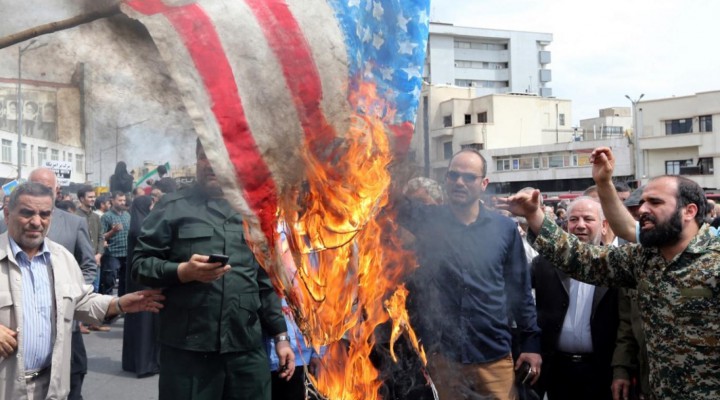 A confluence of circumstances involving the US, Iran, Israel-Palestine and Lebanon paints a worrying picture for the months ahead

War clouds in the Middle East are thickening. A worrisome conjunction of circumstances is leading towards a possible showdown between the Axis of Resistance (Iran, Syria, Hezbollah and some Iraqi Shia militias) and Arab Nato (the US, Israel and some Arab countries).

The first element is the US flexing its muscles against Iran by withdrawing from the nuclear deal, reinforcing sanctions and ceasing to grant oil waivers – moves aimed at triggering the collapse of Iran’s economy, and, hopefully, its regime.

Washington has unprecedentedly designated the Islamic Revolutionary Guard Corps (IRGC) as a terrorist entity – a move that was promptly reciprocated. Sanctions have enriched the organisation, which profits from oil smuggling.

Although US President Donald Trump, contrary to his advisers, does not want another conflict, he is looking to succeed where all his predecessors have failed: to halt Iran’s opposition to US policies in the region, to end the Israeli-Palestinian conflict.

US policy against Iran is not – as initially hoped – the implementation of Trump’s “art of the deal”, which, through calculated brinksmanship, aims to get more leverage for a better agreement. The US administration is not looking for a better deal; if it was, Secretary of State Mike Pompeo would have not laid out 12 preconditions for Tehran that resemble a request more for capitulation than for negotiation.

A cornered Iran could … resort to its real nuclear options: a blockade of the Strait of Hormuz, or withdrawal from the nuclear agreement

The demands include halting uranium enrichment and the development of ballistic missiles, withdrawing from Syria, ending support for Hezbollah and the Houthis in Yemen, disarming pro-Iran militias in Iraq, and dropping all threats against Israel.

Despite the intentions of the two countries’ leaders, the situation may be approaching a point of no return.

This objective has been systematically and relentlessly promoted by Israeli Prime Minister Benjamin Netanyahu, whose re-election is another piece of this worrisome puzzle. If he is not jailed, Netanyahu will continue reinforcing this strategy. His dream is to ultimately eliminate threats anywhere in the region, and to fulfill this, he is ready to alter the democratic nature of his own country.

Syria is the next piece of the puzzle, where Trump’s correct instinct for withdrawal has been downgraded by Washington’s beltway, on the assumption that maintaining a US military presence in the country can prevent the consolidation of the Shia crescent from Tehran to Beirut, deriving from Syrian President Bashar al-Assad’s full victory.

In such a framework, coherent with previous designs attributed to US-Israeli policy in the region, the survival of an Islamic State enclave in eastern Syria could be paradoxically useful. The US would likely withhold giving the crucial green light to major international financial institutions to support the country’s reconstruction, as the increased sanctions against Iran are also heavily biting Syria.

Another piece of the puzzle concerns Hezbollah. While Washington reinforces political and financialpressure on the group, and Lebanon borders on an economic catastrophe, Hezbollah leader Hassan Nasrallah has made worrisome declarations hinting at a possible renewed conflict with Israel this summer.

The last component of the mosaic is the elusive Israeli-Palestinian “deal of the century”, expected after Ramadan. It is expected to bury the two-state solution and formalise US decisions on Jerusalem and the Golan Heights.

Jordan could be the major casualty of this settlement, after the Palestinians, as a deal biased towards Israel could fuel a new wave of violence in the occupied territories and elsewhere.

This summer could see the culmination of all of these components, which could push the Sunni Gulf alliance known as  “Arab NATO” to escalate matters before it becomes too late or too costly to roll back the shifting regional power balance that has been in motion since 2003.

More time could allow Iran to find new schemes to evade sanctions; Hezbollah could strengthen itself after the losses of the Syrian conflict; Assad’s power could slowly consolidate and extend its geographic reach; and pro-Iran Shia groups in Iraq could hijack the country.

Any violent reaction to the “deal of the century” could be managed militarily by Israel more easily now, after its recent election, than next year, when the US election is scheduled to take place. The same rule goes for a possible spike in oil prices related to increased tensions in the region.

In addition, if Trump is not reelected, most Democratic candidates appear keen to reverse the withdrawal from the nuclear deal.

Of course, it is not certain that Saudi Arabia and the UAE can assuage energy markets by replacing Iranian oil production; chaos in Venezuela and Libya could complicate their task. The ongoing Arab Spring 2.0 in Algeria and Sudan could also drag on.

A cornered Iran could fatally drop its strategic patience policy, waiting for the uncertainty of Trump’s exit in 2020, and increase its hybrid warfare in different theatres, or even resort to its real nuclear options: a blockade of the Strait of Hormuz, or withdrawal from the nuclear agreement.

All these reasons for cautiousness notwithstanding, there is an increasing sense of an irrational and messianic drive in Arab Nato’s policy, which paints a gloomy picture for the future.

In an echo of what occurred two centuries ago, when European nations convened in Vienna to restore the violated order after having defeated revolutionary France, today’s B-team – US National Security Adviser John Bolton, Netanyahu, and the crown princes of Saudi Arabia and Abu Dhabi – could find the need to emulate such a historical precedent irresistible, and seek to forever crush revolutionary Iran.

Who will blink first? And would Russia and China consent to such a Vienna-style restoration, aimed also at foiling their own search for a new multipolar world order, unbridled from Western hegemony?

Is a new world order emerging to replace US hegemony?

0 thoughts on “Is the Middle East on the brink of a major showdown?”