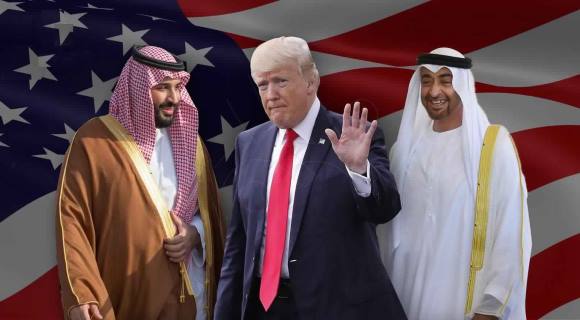 We didn’t need The Wall Street Journal to tell us that the Trump Administration’s plan to create an ‘Arab Nato’ — comprising the six Gulf states, Egypt and Jordan – is in intensive care. Not after the resounding failure of last’s Warsaw Conference aimed at promoting Arab-Israeli normalization and crowning Israeli Prime Minister Benjamin Netanyahu as leader of this alliance.

The Warsaw gathering backfired against all the Arab foreign ministers who attended it, subjecting them to the anger of the public that overwhelmingly rejects normalization. Their formidable media empires did not succeed in concealing this fact, nor in providing marketing cover for this shameful step.

The grave embarrassment this caused has been much in evidence:

— First, Omani Foreign Minister Yousef Bin-Alawi’s began back-tracking from his government’s normalization drive. During a subsequent visit to Moscow, he insisted that meetings with Netanyahu did not amount to normalization and that there would be no normalization before the establishment of an independent Palestinian state. But this explanation is insufficient, in our view. There should be an end to all public or secret meetings with Israeli officials, in line with the Arab Peace Initiative – which was a Saudi/Gulf creation after all – and an acknowledgment that Israel remains the Arab world’s most dangerous enemy.

— Secondly, the way Yemeni Foreign Minister Khaled al-Yamani has been squirming ever since the summit, when he was shown chatting and joking with Netanyahu. He blamed protocol for seating him next to the Israeli prime minister, but Yemenis and Arabs, in general, do not buy this excuse. His normalization gestures were a wonderful gift to the Houthi Ansarallah movement.

— Third, the bashfulness that overcame most of the Arab foreign ministers after three of them (those of the UAE, Saudi Arabia, and Bahrain) were shown at a closed-door session affirming that the Iranian threat takes priority over the Israeli threat. Some of them disappeared from the closing photo-opportunity and refused to talk to journalists and indeed ran away from them. Why do that if they were not ashamed of what they had done?

— Fourth, the fact that hundreds of thousands of Yemenis took to the streets and squares of most of the country’s cities in protest against the conference, and against the way the foreign minister of the ‘legitimate’ government sat next to Netanyahu and lent him his microphone so he could spew abuse against the Arabs and the Palestinians in particular. The Yemenis indeed deserve their reputation as the noblest of the Arab peoples.

— Egyptian President Abdelfattah as-Sisi’s affirmation at the Munich conference that the key to peace and stability in the Middle East is a resolution to the Palestine Question. This was akin to an indirect apology for his foreign minister’s attendance at the Warsaw gathering, and a renunciation of the Gulf delegates’ insistence that the Iranian threat takes precedence over the Arab-Israeli conflict.

These retreats were imposed by the angry Arab public reaction to the normalization drive, as well as the rise of the Resistance Axis, which has overturned all previous equations in the region.

It is shameful that while most of the EU’s foreign ministers stayed away from the Warsaw conference – along with their counterparts from China, Russia, India, and Turkey – twelve Arab ministers took part on orders from US Secretary of State Mike Pompeo and Jared Kushner, architect of the ‘Deal of the Century’.

Even more shameful is the fact that while Malaysia refuses to let Israeli representatives take part in a sporting tournament it is hosting, Israeli athletes flood into Gulf capitals accompanied by Mossad protection units.

Arab public opposition to normalization is quickly gathering pace, and the social media are now in control of the narrative. They have been resisting the normalizing regimes, and have gained the upper hand over their multi-billion dollar media empires and their attempts to justify their rulers’ actions.

We must salute everyone in the Arab world who has been saying ‘no’ to normalization and the normalizers, especially in Saudi Arabia and the Gulf were they have formed societies for this purpose and some of whom have been detained and remain behind bars for refusing to renounce their honourable patriotic stands.

Those who are contemptuous of the Arab peoples, and of their commitment to their central cause, will live to regret it one day.

0 thoughts on “The Still-Born ‘Arab Nato’”