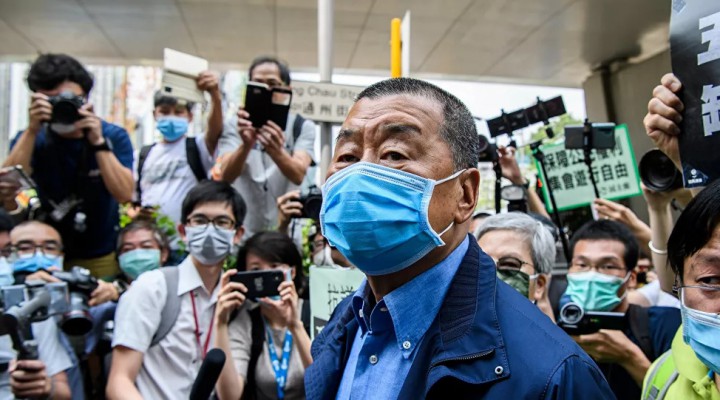 The arrest of Hong Kong media mogul Jimmy Lai has sent Western news outlets into a tizzy. We are told that “free speech” is under attack by the Chinese authorities who are supposedly rolling back democracy on the semiautonomous island city.

Lai was arrested in the offices of his media company and led away in handcuffs by police officers. He is charged with “colluding with foreign powers” in undermining Beijing’s sovereign authority. Western media are claiming that his arrest is an example of the alleged abuse of a new security law imposed on Hong Kong by the Beijing central government. That law proscribes activities deemed to be seditious or subversive.

For well over a year now, Hong Kong has been in upheaval from protests against the central government in Beijing. Those protests have involved massive violence and destruction of public property, including the torching to death of innocent bystanders.

Law and order in Hong Kong is the sovereign responsibility of Beijing ever since Britain handed back its former colony to China in 1997.

The street protests under the guise of “pro-democracy” movement are but a Trojan Horse for Britain and the United States to interfere in China’s internal affairs and destabilize Beijing’s sovereignty.

Washington and London have stepped up sanctions and reprimands against the Chinese government in line with boosting the protests. The leaders of the Hong Kong demonstrations have been hosted by American and British officials. Some of them even live in exile in London. There can be no clearer evidence that the United States and Britain are exploiting Hong Kong as an entry point for weakening China, just as they did in past centuries as imperial powers during the Opium Wars.

The geopolitical tensions with China have become ever-sharper over the self-inflicted disastrous mismanagement of the coronavirus pandemic in the US and Britain. Those two countries are the world “leaders” in terms of death toll from the disease. But there is also the bigger background picture of Washington becoming increasingly hostile towards Beijing (and Moscow) owing to what it calls “great power competition”. In this context, Britain is serving as Washington’s snarly lapdog for snapping at the heels of China (and Russia).

So, how about Jimmy Lai? The 71-year-old media magnate was born on the Chinese mainland. His once wealthy family is reputed to have lost their privileges when communist rule was established in 1949. Lai sounds like a perfect cipher for Western ambitions of regime change in Beijing.

Western media, not surprisingly, have lionized him as a “leading pro-democracy advocate”. One of his newspapers, Apple Daily, is described by Associated Press as a “feisty pro-democracy tabloid that often condemns China’s Communist Party government.”

That’s quite astounding understatement. Lai has personally taken part in unlawful demonstrations and his media outlets have acted brazenly as agents of provocation, or sedition.

Earlier this year, Apple Daily ran a front page appeal by its owner to US President Donald Trump, beseeching the American leader to intervene in Hong Kong to “save us” from the Chinese government.

Last year just as protests were erupting in Hong Kong, Lai was feted in Washington by Vice President Mike Pence and Secretary of State Mike Pompeo. The agenda of their discussions included China’s security affairs.

Now let’s run this scenario again with a slight change of actors and location. Imagine if a media mogul in Seattle was publishing newspaper headlines every day condemning the federal government in Washington and openly calling for repudiation of US sovereignty. Imagine if this American media mogul flew to Beijing and was photographed holding private discussions with top government officials about law and order affairs.

There is more than a fair chance, to say the least, that said media mogul would be arrested by US federal officers and pilloried for being a traitor.

The double standards and arrogance of the US and British media are staggering in their coverage and commentary regarding Hong Kong. Hong Kong was ruled from London as a colony for nearly 150 years without even a token of democracy. Yet all of a sudden, we are led to believe, Britain has discovered concern for “democracy” in Hong Kong, while the Americans apparently cherish “freedom” in the Chinese territory – freedom, that is, to subvert the government in Beijing.