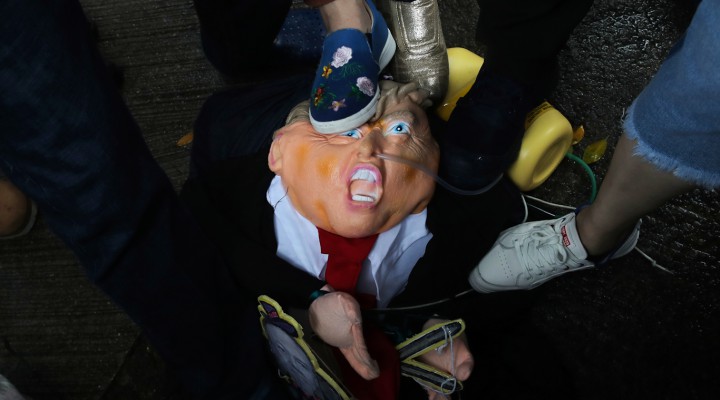 Trump’s new law, the Hong Kong Autonomy Act, places mandatory sanctions on officials or organizations (including businesses) that the White House views as helping Beijing clamp down on political freedoms.

MPN– In a speech at the White House Rose Garden yesterday, Donald Trump announced new sanctions on China due to their “interference” in their own Special Administrative Region of Hong Kong. The president said that he was placing “massive tariffs” on Beijing and that Hong Kong would now be treated the same as mainland China, with “no special privileges, no special economic treatment and no export of sensitive technologies.”

Earlier today, China’s foreign ministry said it “firmly opposes and strongly condemns” the new law interfering in its domestic affairs, adding that it would “definitely hit back,” by taking, “necessary responses to protect its legitimate interests, and impose sanctions on relevant U.S. personnel and entities.”

The move is merely the latest chapter in the rapidly deteriorating relationship between Washington and Beijing. Even before taking office, Trump was demonizing China as an enemy and the reason for America’s flagging economy. He has also taken every opportunity to frame the COVID-19 pandemic as the “Wuhan China Virus,” even committing the United States to pull out of the World Health Organization for refusing to censure Beijing.

In 2012, President Obama announced the U.S.’ new “Pivot to Asia” strategy, beginning to build up military forces in the region to surround China and Russia. The 2021 Pentagon budget explicitly focuses on an upcoming war in the region, requesting an increase in funding as a result.

Along with the political and military conflict brewing, Washington has also been prosecuting an information and trade war against China on the world stage. The Trump administration is attempting to convince other nations to restrict Chinese company Huawei from controlling the worldwide 5G network while mulling over a total ban of popular Chinese video app TikTok. “It’s something we’re looking at,” said Secretary of State Mike Pompeo last week. Last month a U.S.-government funded think tank also managed to convince Twitter to delete over 170,000 pro-Chinese accounts. American military analysts have publicly advocated that the U.S. should bombard Asia with “Taiwanese Tom Clancy” stories, where Beijing is the enemy, as part of a new Cold War.

The U.S. has also been funding and supporting what it calls “pro-democracy movements” across China and Hong Kong, including the famous protests that have engulfed the city for over a year. Official figures show that the National Endowment for Democracy has spent over $29 million bankrolling anti-Beijing efforts since 2014. China’s newly passed national security law criminalizes subversion, secession, terrorism, and collusion with foreign forces, leading many of the protest leaders to immediately fly to the United States or Great Britain. Despite the new law, Hong Kongers’ support for the protests remains relatively high, at 51 percent, although that number is dropping.

The history of a city-state

The insatiable British thirst for tea began to develop in the 18th and 19th centuries, but the Chinese empire would accept only gold or silver for their valuable crop, which they maintained a monopoly over. The trade was beginning to bankrupt Britain, so it used its military to force the Chinese to cede Hong Kong to it, from where it flooded the country with opium, devastating the society. By the end of the 19th century, around a third of China was addicted, further weakening the empire, which was forced to sign over the region to the British for a further 99 years in 1898. The British used Hong Kong to swap tea for opium. At the same time, they stole the plant and began cultivating it in northern India. The innumerable death toll and the loss of sovereignty contributed to what the Chinese still call the “century of humiliation.” While Hong Kong was handed back in 1997, the city maintains a 50-year agreement with Beijing called the “One Country, Two Systems” policy, which gives it an amount of self-autonomy, something which protesters today say is under threat. Pro-Trump protesters stage a rally outside the US Consulate in Hong Kong, Dec. 1, 2019. Vincent Thian | AP

While its local economy boomed when China was relatively closed off from the West, economically, Hong Kong began to decline in the 1980s and 1990s due to increased competition from other Chinese regions. After 1997, it largely became just another city, and was outpaced by new powerhouses like Shenzhen and Shanghai, leading to economic malaise and a declining or flat-lining quality of life for many residents, adding fuel to the current protests. Many protesters have flown the colonial British flag because they associate it with a more prosperous time.

In his briefing yesterday, Trump also took shots at his opponent for president, Joe Biden, whose “entire career has been a gift to the Chinese Communist Party,” he claimed, adding that, “it’s been devastating for the American worker.” Trump also suggested that Biden loved China more than the United States. For their part, Biden’s foreign policy team claim their number one priority is “dealing with authoritarian governments” like China, hinting they would welcome a new war with Beijing.  Biden himself has tried to one-up Trump, condemning the president for supposedly being “soft” on China, suggesting he would take a tougher line.  He currently holds a 9-point lead on Trump in combined polls for November. Regardless of who wins, increased conflict with China seems likely.

Feature photo | Pro-China supporters step on an effigy of US President Donald Trump outside the U.S. Consulate during a protest, in Hong Kong, May 30, 2020 over a series of US measures aimed at China as a rift between the two countries grows. Kin Cheung | AP