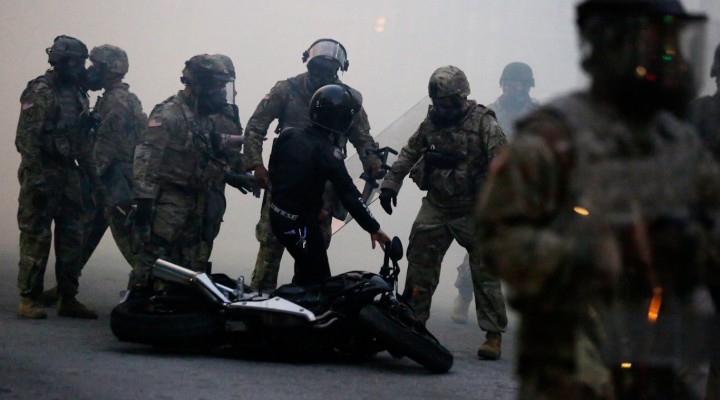 While the world condemns China for its response to the Hong Kong protests, the numbers and the images make clear that the US has responded to its popular uprising with more force and less tolerance than Beijing

MPN– After just over a week of demonstrations, the number of Americans arrested in the George Floyd protests far exceeds that of over a year’s worth of protests in Hong Kong. A survey of just 30 police departments conducted on Tuesday found that they had collectively detained over 11,000 individuals, meaning the actual number detained across the entire country is certain to be higher. That compares to around 9,000 for Hong Kong.

Chinese authorities have been roundly condemned by Western governments and by human rights organizations for their excessive use of force, using tear gas and rubber bullets that have harmed protestors. However, in more than a year of near-constant conflict, authorities have not killed anyone. In contrast, at least 17 people have been killed protesting in the U.S. The National Guard was almost immediately activated and deployed to 24 states, with the president encouraging authorities to shoot anyone deemed to be “thugs” or “looters.” “When the looting starts, the shooting starts,” Trump tweeted. Police seem to have taken that message to heart, shooting and killing Sean Monterrosa, an unarmed 22-year-old in Vallejo, California, while he was kneeling and had his hands up. Meanwhile, on Wednesday LAPD shot a homeless, wheelchair bound man in the face.

In both the United States and Hong Kong, authorities have pointed to outside agitators to explain the violence. St. Paul mayor Melvin Carter claimed last week that every protester arrested was from out of state, implying there was a grand conspiracy to commit violence. He later retracted his statement after it was proven that the vast majority were, in fact, locals. Susan Rice, former American Ambassador to the United Nations and National Security Advisor to President Obama, believed she saw a Russian hand in the chaos. “I would bet, based on my experience… this is right out of the Russian playbook,” she told CNN’s Wolf Blitzer, adding, “I would not be surprised to learn that they have fomented some of these extremists on both sides using social media, I would not be surprised to learn that they have been funding it in some way, shape or form.” Trump’s National Security Advisor blamed China and Iran. Meanwhile, Florida Senator Rick Scott claimed that the protests were being organized by Nicolas Maduro of Venezuela. None of them could point to anything more substantive than a few tweets. On the other hand, some of the Hong Kong protesters are being openly trained, funded, and supported by Washington. Since 2014 – the year of the Umbrella Protests in Hong Kong – the White House’s regime change organization the NED has (officially) poured over $29 million into China and Hong Kong to “identify new avenues for democracy and political reform.” But before the Hong Kong protests erupted, NED President Gershman called China a “resurgent despotic regime tightening repression internally and expanding its power globally,” claiming that “democracy is under threat” and we must “come to its defense,” thereby confirming that anything “pro-democracy” in China is, by definition, anti-government. Since the protests began, Washington has led the world in trying to pressurize and isolate China over the issue, and protest leaders like Joshua Wong travel back and forth to the U.S. to meet top American officials. Meanwhile, American diplomat Julie Eadeh was photographed in a meeting with other protest leaders.

The U.S. conflict erupted after videos surfaced of Minneapolis police officer Derek Chauvin choking unarmed, handcuffed black man George Floyd to death. In Hong Kong, anger arose in response to a proposed extradition treaty with China that many islanders felt would greatly undermine the special civil liberties they hold. Both protests enjoy a good amount of public support; polls show that between 50 and 60 percent of Hong Kong natives generally support the protests, while 54 percent of the U.S. back the George Floyd demonstrations. But despite similar levels of approval, their bases of support contrast greatly. While the George Floyd protests have seen the burning of the American flag and are categorically opposed to Donald Trump’s racist intervention, Hong Kongers fly the U.S. flag high and appeal to him directly to intervene: “President Trump: Please liberate Hong Kong” is one particularly prevalent slogan seen on banners. Elsewhere, Hong Kongers sang “God Save the Queen” and hung the flag of the United Kingdom in the city’s legislative building. The British ruled the territory as a colony until 1997, and the gesture was interpreted by Western media as a “plea” for the U.K. to intervene.

Don't let anyone tell you BLM and Hong Kong stand for the same thing. pic.twitter.com/MdcQ0vOPPH

While the world condemned China for its response to the protests, the numbers and the images make clear that the U.S. has responded to its popular uprising with more force and less tolerance than Beijing. If China is an authoritarian police state, does that mean the U.S. also qualifies for the same title?