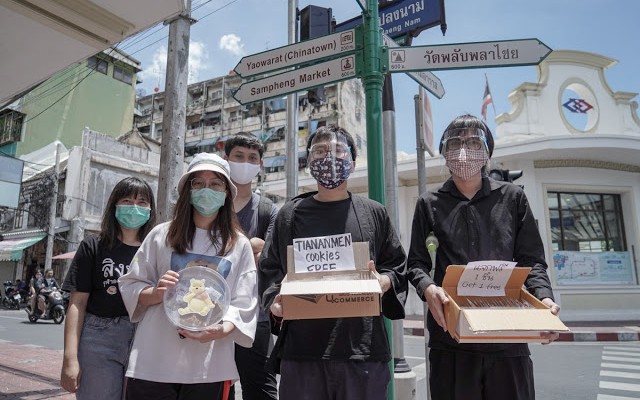 US-backed protesters complain about economy, then seek to ruin regional relations with Southeast Asia’s most important economic partner, investor, and source of tourism.

One of Washington’s reoccuring dreams is creating a “pan-Asian alliance” to encircle and contain China’s economic and political rise. Unable to do this through regime change, economic incentives, military alliances, or even coercion and terrorism, it has drawn deeper and deeper from its “soft power” toolkit.
The US is also increasingly lumping its various regional assets together to fight in its growing rift with China.

In this way, it already has a “pan-Asian alliance” – made up of US-funded opposition groups, opposition parties, media platforms, and online information operations in virtually every one of China’s neighboring countries as well as within Chinese territory itself.

They are funded and directed out of US embassies and consulates throughout the region as well as through US government-funded organizations and agencies like the National Endowment for Democracy (NED), the US Agency for Global Media (USAGM), and the Open Technology Fund (OTF) – as clearly seen behind the unrest in Hong Kong.
They lack any specific agenda or platform other than opposing regional governments targeted by the US and more recently – being “anti-Chinese,” “pro-Western,” and repeating ambiguous and deliberately unspecific slogans about democracy, freedom, and human rights. 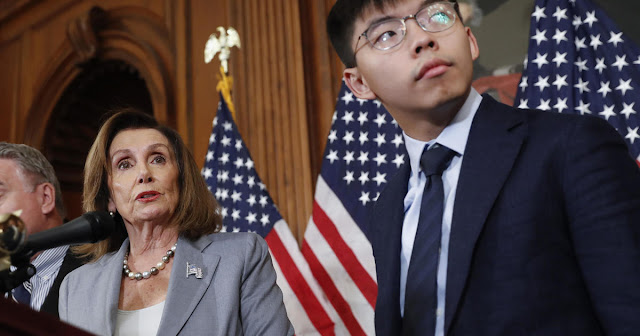 Aside from direct funding from the US government and the promise of potential fame and mention across the Western media, those recruited into this “pan-Asian alliance” get little else out of it and certainly offer the public even less should they and their agenda ever find their way into local or regional leadership roles.
This alliance has increasingly found itself working together, attempting to create synergies in US-backed efforts aimed at specific Asian-Pacific nations as well as toward efforts aimed directly at China itself.
The “Mik Tea Alliance”
The name of this “alliance” is as puerile as its premise. It is essentially a collection of US-funded agitators from across the region consolidating their efforts against China specifically.
While many of these individuals and organizations involved are often referred to as “activists,” they rarely take up legitimate causes aimed at improving the lives of people in their communities and respective nations and instead function as political attack dogs unleashed against various targets of US angst.
The pro-Western Google Grant recipient Hong Kong Free Press (HKFP) in an article titled, “Milk is thicker than blood: An unlikely digital alliance between Thailand, Hong Kong & Taiwan,” would attempt to positively publicize this so-called “alliance.”
There is very little that is “unlikely” about US-backed agitators consolidating their efforts, cooperating, or aiming their collective efforts at China – unless the common denominator of US-backing is omitted – which of course it is.
HKFP claims:

For the first time, netizens from Thailand, Hong Kong, Taiwan, and other Asian countries, joined forces to hit back at China’s huge online army in an internet war.

The article admits the alliance focuses on various issues the US itself is particularly obsessed with including blocking the construction of Mekong River dams, ongoing US provocations in the South China Sea, and the West’s annual shaming of China over the 1989 Tiananmen Square unrest.
Most recently the “Milk Tea Alliance” was mobilized to help attract attention to US-funded opposition groups in Thailand – attract attention to their street protest and their regime change demands – certainly not to their US funding.

Leader of US destabilization in Hong Kong – Joshua Wong – who has literally travelled to Washington DC multiple times to lobby for aid and receive awards – emerged as one of the leading figures of this alliance.

The forming of this new “Pan-Asia Alliance” – as coined by Hong Kong activist Joshua Wong – also indicated an ongoing frustration in the region regarding China’s influence and actions that affected less powerful countries on the ground level. The Milk Tea Alliance was an attempt to keep China’s unmatchable power in check, and it demonstrated the need for smaller nations to unite and cooperate. This unexpected internet war reflected a long-felt need to counter the unbalanced power dynamics in Asia.

Unsurprisingly Wong and others in the “Milk Tea Alliance” have very little to say about Washington’s oversized role in Asia’s “power dynamics” despite not even being located in Asia – or Washington’s “unmatchable power” in places like the Middle East, North Africa, or Central Asia where it has destroyed entire nations and to this day still militarily occupies several of them.
The “alliance” and media outlets like HKFP also have little to say about the coincidental nature of the alliance’s agenda and how neatly it fits in with US foreign policy – especially since the most prominent members of the alliance are literally funded, backed, and publicly rewarded by the US government.
Building Myths About “Imperial China”
Another member of Washington’s online “Milk Tea Alliance” and an eager recipient of Western backing is Netiwit Chotiphatphaisal of Thailand – whose Twitter timeline is filled with retweets of Western articles describing China’s growing “imperial” ambitions.
Despite not even being born at the time, Netiwit (born 1996) annually protests the Chinese embassy in Bangkok over the 1989 Tiananmen Square incident. He and the “Student Union of Thailand” now currently leading US-backed anti-government protests in Thailand – recently attempted to protest outside the Chinese embassy regarding Hong Kong’s new security law in addition to Tiananmen.A Khoasod article titled, “Activists Condemn Tiananmen Killings, Give Away Cookies,” would report:

“Student Union of Thailand (SUT) is one with the Hong Kongers in condemning the recent security law, which is a severe attack against the city’s autonomy, rule of law, civil rights, and liberties,” the activists said in a statement published in Thai, English, and Chinese.

The group, which counts about 200 students as its members, added in its statement that “Chinese imperialism” is threatening the independence and livelihood in many nations, including Thailand.

Apparently the fact that Hong Kong’s current crisis is rooted in very real – and very British – imperialism is lost on Netiwit and his Student Union of Thailand. 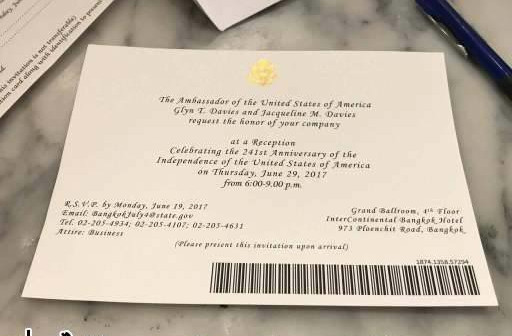 Meanwhile, Netiwit regularly receives and accepts invitations to various Western embassies in Bangkok, including the British embassy where he literally was wining and dining with British diplomats and fellow Western-backed agitators.
As Netiwit annually complains outside the Chinese embassy about an incident that occurred years before he was even born and complains about China’s attempts to fully recover its sovereign territory from decades of British imperialism – he is regularly hosted by foreign embassies that are – today – engaged in multiple wars of aggression, military occupations, torture, and abuse on a scale that even the wildest claims about China cannot rival.
Netiwit has – unsurprisingly – yet to stage protests outside the embassies of these nations.
The “imperialist” or “revisionist” China narrative Netiwit promotes in exchange for constant mention and praise across the Western media and repeated invites to Western embassy dinners may find its place inside the “Milk Tea Alliance’s” online echo chamber – but for the vast majority of Asia’s population it is transparent propaganda and an obstruction to real economic progress, peace, and stability.
Ranting and Raving vs. Roads and Railways
Conversely, the genuine economic might China is developing and the deep and enduring ties it is creating has built a much larger, more powerful – and most importantly – more sustainable “pan-Asian” partnership.
It is a partnership in which roads, rail, airports, and seaports are being built and through which each respective nation in the region imports and exports the vast majority of their economic activity through.
China’s rise regionally and globally has created economic opportunities both within China itself for prospective students and workers and across the region as manufacturing, tourism, and trade continuously expands.
This is even noted by the Western media. In one breath it claims the “Milk Tea Alliance” shows Asia’s youth is “losing their sense of kinship with China.” In the next, it paradoxically admits that the number of Asian youths traveling, working, and studying in China “has never been higher.” It is clear the former trend is artificial and deliberately overemphasized by the Western media while the latter represents an inconvenient truth to be buried dozens of paragraphs deep in any given article on the subject.
Not only is China the largest and most important trading partner for virtually every nation in Asia, but local businesses focused on domestic markets either retail goods made entirely in China or manufacture goods made with components originating in China.
For the average worker or business owner in Asia, the rantings and ravings online by the “Milk Tea Alliance” along with their repetitive street performances and the trouble between China and the rest of Asia they seek to create are unconvincing incentives when compared to the physical roads and railways jointly built with China bringing in goods, money, tourists, and technology.
Without the US being able to match its massive soft-power political machinery with industry and investment providing a viable alternative to China – its “Milk Tea Alliance” and all those who are a part of it are simply spiteful speed bumps aimed at diminishing and disrupting regional progress, peace, and stability – not in any way promoting or contributing to it.
https://landdestroyer.blogspot.com/2020/07/washingtons-anti-chinese-pan-asian.html
Tags: ChinaHong KongThailandUSA