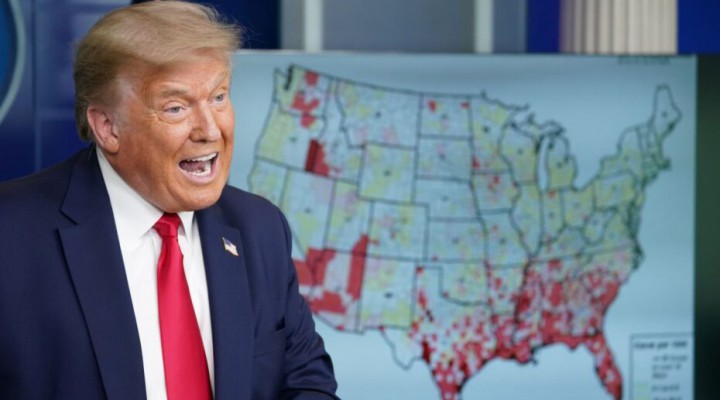 Trump has no power over the fact that history will one day view him as the most vile, corrupt, and fascistic president of the United States, Wayne Madsen writes.

The impeached U.S. President, Donald Trump, has taken a step never attempted by any of his predecessors. Trump, who every day is exposing his fascist policies and intentions, has announced that he is establishing a “1776 Commission” to re-write American history and force-feed it to every public and certain private school students throughout the United States. Trump’s move is intended to counter the 1619 Project of the New York Times, which is designed to place slavery and the slave trade in a central context in dealing with the history of pre- and post-colonial America.

Trump’s designs on America’s history book evokes the passage by George Orwell in “1984” – “Who controls the past controls the future, who controls the present controls the past.” While Mr. Trump has likely never read Orwell’s novel about a dystopian North America and British Isles controlled by the dictator, “Big Brother,” he is surrounded by enough neo-fascists who have read it and obviously find guiding thoughts and principles within its pages.

Trump’s 1776 Commission is a blatant attempt to literally “whitewash” American history by advancing long discarded pollyannish tropes about European-Americans “civilizing” the Native peoples of North America, slavery being a necessary component of colonization, and unbridled capitalism being the engine that built the United States. Extreme right-wing Senator Tom Cotton, Republican of Arkansas, recently opined that slavery was what the founding fathers of the United States stated was a “necessary evil.” Cotton wants to de-fund any school in the United States from receiving federal funds if they abide by the 1619 Project’s contention about slavery causing the Civil War and resulting in many of America’s social ills following that war. The 1619 Project quite correctly asserts that the U.S. African slave population grew from 500,000 to 4 million and it was the evil of a minority of white southerners treating 4 million human beings as their private property that rallied the Northern states to fight a costly war of emancipation and conveyance of full citizenship rights.

It is white racist extremists like Cotton who are revising history by claiming the founders of the American republic saw slavery as a “necessary evil.” In fact, Cotton made up his assertion out of whole cloth. Not a single signer of the American Declaration of Independence in 1776 said or wrote that slavery was a “necessary evil.” Trump and Cotton’s cockamamie 1776 Commission will not stop with slavery but also seek to re-write the history of American expansionism into the Western part of North America and its wars of colonization against Mexico; indigenous tribes like the Navajo, Sioux, and Apache; Spain; and the Kingdom of Hawaii.

Other targets for the re-writers of American history include the advent of the industrial barons of the late 19th century and early 20th century coupled with the rise of the labor unions. To the revisionists, the labor movement was spurred on by socialists, Marxists, anarchists, and Bolsheviks. Like the suffragette movement that triggered gender equality laws, the labor movement has always been demonized by the plutocrats who see labor, women, able-bodied children, as well as African-Americans, Hispanics, Native Americans – and, at one time, Chinese laborers and Irish indentured servants –  as mere commodities to be treated as any other corporate asset. Trump, Cotton, and their ilk seek a return to those dark days in American history, while teaching that the days of Jim Crow racism in the South, massacres of Native tribes in the West and Midwest, and squalid “sweat shops” employing disenfranchised women, as well as children, represented some sort of “golden years” of U.S. history.

Another plank of the historical revisionists is to claim that Adolf Hitler and his Nazi Party were “leftists,” as opposed to a fanatical right-wing leader and movement. Several supporters of Donald trump, including the extreme right-wing president of Brazil, Jair Bolsonaro, reason that because Hitler’s National Socialist German Workers’ Party had the word “socialist” in its name, they were socialists. Nothing could have been further from the truth. In a craven attempt to appeal to the working class, the Nazis added “socialist” to their title. However, the Nazis were corporatists and opposed to the labor movement and both the German Social Democrats and the German Communists, both parties being banned by the Nazis in 1933. The anti-capitalist strand of Nazi party thought, formulated by Gregor Strasser in the 1920s, was denounced by Hitler and his followers in 1926 and Strasser was forced to reject his views in 1930. To make certain that Strasser would cause him no more trouble, Hitler had Strasser arrested during 1934’s “Night of the Long Knives.” Strasser was later shot and left to bleed to death in his prison cell. Other right-wing revisionists have falsely claimed that Franklin D. Roosevelt, Harry S Truman, Barack Obama, Hillary Clinton, and Joe Biden represent something called “liberal fascism.” That term is an oxymoron and, more precisely, a non-sequitur. There has never been anything “liberal” or “progressive” about fascism and there never will be.

Trump’s far-right cadres are also in the process of re-evaluating zealots like Republican Senator Joseph McCarthy of Wisconsin and FBI director J. Edgard Hoover whose “witch hunts” against accused Communists in Hollywood, the arts and sciences, and literature and academia led to ruined careers and, in some cases, suicides. One historical fact cannot be altered. Trump’s political mentor happens to have been the general counsel for McCarthy’s Inquisition-like committee, the infamous lawyer Roy Cohn.

Trump and his allies are also attempting to re-write the history of the Civil War by placing in an honorable status those Confederate leaders who seditiously seceded from the United States and took up arms against it. The Confederate leaders fought the United States to preserve the institution of slavery. When historical fabulists like Trump and his gang of modern “Know Nothings” insist on altering the record of past events, the words of civil rights leader James Baldwin in his book, “No Name in the Street,” come to mind, “Ignorance, allied with power, is the most ferocious enemy justice can have.”

In a Hitleresque move, Trump, along with announcing his “1776 Commission,” also unveiled his proposal for a “National Garden of American Heroes.” Such a garden of statues evokes visions of tyrannies throughout history, from the Roman Empire to the Axis powers of World War II and Saddam Hussein’s Iraq. Trump also announced a rather toothless executive order that calls for the imprisonment of anyone who destroys or desecrates a statue. Trump made no exceptions for destroying statues that may have been erected honoring slave owners and war criminals who massacred Native Americans.

Trump has no power over the fact that history will one day view him as the most vile, corrupt, and fascistic president of the United States. Trump will join the ranks of the worst perpetrators of injustice and outrageous conduct of the American experience, joining ranks with his old friend Cohn and his one-time boss McCarthy; Abraham Lincoln assassin John Wilkes Booth; Ku Klux Klan founder and Confederate general Nathan Bedford Forrest; South Carolina Governor and Senator Ben “Pitchfork” Tillman; Nazi German-American Bund leader Fritz Kuhn; Mississippi segregationist Governor and Senator Theodore Bilbo; J. Edgard Hoover; Georgia racist Governor Lester Maddox; and Fred Trump, Sr., former Klan member and Nazi sympathizer. Far from Trump attempting to erase these rogues from the history books, he will, one day, accompany them in the cavalcade of America’s very worst historical scoundrels.

Assaults on Postal Systems Are Attacks on National Sovereignty

0 thoughts on “The Menace of Far-Right Historical Revisionism”