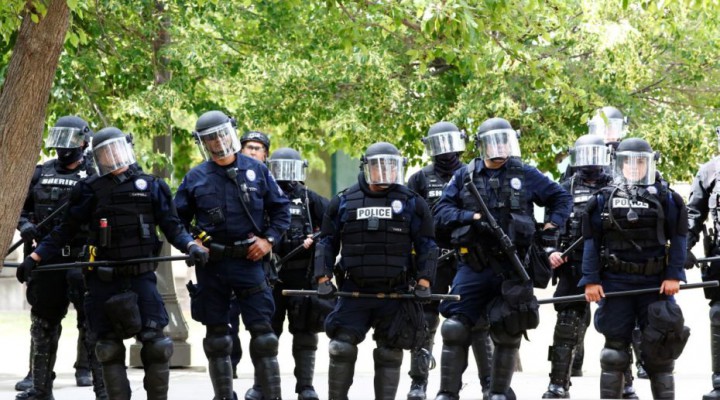 The election of Trump as president made a bad situation involving white supremacists and neo-Nazis serving in U.S. law enforcement agencies much worse.

Within the U.S. labor movement there exists a far right-wing Trojan Horse that is bent on perpetuating police violence and murder of people of color and resisting all attempts at police reform, including criminal prosecution of police officers who commit wanton acts of murder and other forms of physical violence. The Trojan Horse is the police union “blue line,” the corruption of which is coming to light in a number of jurisdiction following the police killing of George Floyd, an African-American, in Minneapolis, an act that set off massive protests around the United States and the world.

At the pinnacle of the police unions is the International Union of Police Associations (IUPA), which is headquartered in Sarasota, Florida. Masquerading as a charitable organization, the IUPA is anything but “charitable.” IUPA’s tax category defines the group as a “labor, agricultural, or horticulture organization whose object must be the betterment of conditions of those engaged in the pursuits of labor, agriculture, or horticulture, which includes lobbying.”

The IUPA, which endorsed Donald Trump for re-election in September 2019, is nothing more than a political right-wing organization that describes the Democratic Party and Democratic office holders and candidates as “anti-police” and “anti-law enforcement,” which is a canard designed to increase its donations from other right-wing Republican organizations and individuals in the United States. IUPA joined the Fraternal Order of Police in endorsing Trump in 2016 and 2020. Unlike the Fraternal Order of Police, which is largely funded by union dues, most of IUPA’s contributions come from dubious phone solicitation fundraisers.

Trump has returned the favor of the IUPA’s endorsement by having his National Security Adviser, Robert O’Brien, declare with a straight face on CNN, “I don’t think there is systemic racism. I think 99.9 percent of our law enforcement officers are great Americans.” As always with statistics and the Trump administration, simple mathematics prove O’Brien very wrong. Statistics show the percentage of U.S. police officers linked to systemic racism to be at least 20 percent.

The IUPA has been at the forefront of opposing police reform legislation and edicts at the national, state, county, and municipal levels. In many ways, the IUPA and its constituent member associations and unions act racketeering shakedown artists, threatening government officials who attempt to reform problematic police departments with political retaliation.

According to its tax filings, the IUPA has misrepresented the number of law enforcement officers it represents. The union association has claimed representation for over 100,000 police officers, but the actual number is 19,200. As a charity, the IUPA, which also does business under the names “Police Officers Support Association” and “National Emergency Responders Coalition,” was given a D minus rating by the Better Business Bureau and the “Tampa Bay Times” cited the police organization as one of the worst-run charities in the United States.

The union association’s leadership, working from their own building in downtown Sarasota, consists of an “international union president,” an “international union vice president,” and an “international secretary-treasurer.” The IUPA president, who is a retired detective with the Defiance, Ohio Police Department, has served in his present position since 1995 and as an IUPA official since 1988. The IUPA vice president is retired from the U.S. Air Force Security Police and Milwaukee Police Department. Nothing reeks more of a “good old boys” police network than the IUPA. The IUPA building in Sarasota hosts several front organizations that also conduct telephone fundraising scams. These groups have names like the Fairfax Deputy Sheriff’s Coalition, the US Secret Service Uniformed Division Officers Association, the Institute for Police Research, International Union of Police Associations – Florida Local 6000 – AFL-CIO, and the Law Enforcement Political Action Committee.

It comes as no surprise that for two of the police departments where the IUPA leadership once served – Defiance and Milwaukee — there have been recent “shoot first and ask questions later” incidents by the police. Sometimes, it is law enforcement officers who are on the receiving end of wanton police violence. For example, a Travis Air Force Base, California air policeman, Staff Sgt. Steven Carrillo, was arrested during the recent civil strife across the United States for shooting and killing two law enforcement officers, a federal security guard outside the Ronald V. Dellums Federal Building in Oakland and a Santa Cruz County Sheriff’s deputy. Carillo, who was identified as a member of the far-right terrorist organization, “Boogaloo Bois,” also wounded five other law enforcement officers in his killing spree. The Carillo case pointed to white supremacist infiltration of both the military and law enforcement. Rather than purge their ranks of white supremacist police officers, the IUPA and other police unions hide behind their “blue wall” of silence and mutual protection.

As a part of the AFL-CIO, America’s largest labor union, the national labor federation has faced demands from other member union, particularly those with a large number of African-American and Hispanic-American workers, to oust the IUPA from the AFL-CIO. The “Drop the Cops” campaign intensified after the police murders of African-Americans in Minneapolis and Louisville, Kentucky. One group of progressive labor activists, the Action Network, has demanded that the AFL-CIO expel IUPA. In a recent statement, The Action Network asserted, “Since their earliest days, police in the United States have repressed striking workers, brutalized marginalized communities, and fought against an array of efforts to create a more just society… The material interests of police as they presently exist in the United States are antithetical to the values of our labor movement . . . Across the country, police unions stand opposed to the broader aims of the labor movement. Shamefully, Donald Trump is endorsed by the country’s two largest police unions: the unaffiliated Fraternal Order of the Police and the AFL-CIO affiliated IUPA. In Minnesota — the site of George Floyd’s murder — Minneapolis Police Federation President Bob Kroll has amassed dozens of internal investigations and a record of inflammatory statements.” Kroll’s union, like those of New York City and Louisville are independent of both the IUPA and Fraternal Order of Police.

It has been avowedly pro-Trump law enforcement officials like Kroll and former Maricopa, Arizona Sheriff Joe Arpaio (who received a Trump presidential pardon after his federal conviction on contempt of court) who have been at the forefront of brutal repression of minorities and it is individuals like them that the IUPA, Fraternal Order of Police, and Police Benevolent Associations have sought to protect all police officers under the guise of “labor union” safeguards. Joining them in ensuring the solidarity of the “blue wall” are police unions that are part of the International Brotherhood of Police Organizations/National Association of Government Employees and the Teamsters. In reality, police unions are not much better than Mafia organized crime enterprises that have been federally prosecuted pursuant to the Racketeer-Influenced and Corrupt Organizations (RICO) Act.

Corrupt police unions have also helped foster links between the worst police offenders of civil and human rights and various white supremacist organizations, including many that engaged in “false flag” arson, looting, and vandalism during the recent Black Lives Matter protests around the United States.

A survey of certain constituent IUPA and other police unions, including the Fraternal Order of Police, reveals that many of the police forces they represent have had issues with racist police officers and employees, some with ties to white supremacist and other far-right groups. These include IUPA locals in Bel Air, Maryland; Fairfax County, Virginia; Indianapolis, Indiana; Sussex County, New Jersey; Philadelphia, Pennsylvania; Orlando, Florida; Orange County, Florida; Anne Arundel County, Maryland; Boca Raton, Florida; and Salt Lake City, Utah. Over the past several decades there have been scandals involving racist law enforcement officers in departments ranging from the Los Angeles County Sheriff’s Office and Los Angeles Police Department to Cleveland, Ohio and the Williamson County, Texas Sheriff’s Office.

In several police departments that have been plagued by white supremacist and neo-Nazi employees there has also been a very bizarre link to Israel. Many problematic police departments in the U.S., including those of Minneapolis; Atlanta; Orlando; Baltimore; St. Louis; Los Angeles; New York City; Boston; Las Vegas; Miami-Dade; Seattle; Oakland; Jacksonville, Florida; Washington, DC; Ferguson, Missouri; San Diego; San Bernardino, California; Anoka County, Minnesota; Gwinnett County, Georgia; Ascention Parish, Louisiana; Ventura County, California; Orange County, California; as well as the New York, Maine, Massachusetts, and New Jersey State Police and the Tennessee and Georgia Bureaus of Investigation, have received training in Israel, either courtesy of taxpayer-funded programs or enterprises funded by the Anti-Defamation League, the American Israel Public Affairs Committee (AIPAC), the American Jewish Committee, and the Jewish Institute for National Security Affairs. According to Amnesty International, this training, which includes the use of the often lethal “choke hold” and “neck restraint,” have been routinely practiced in both Israel and the illegally-occupied West Bank. Laughably, the ADL’s involvement in such police training involves its “Center on Extremism” and “Civil Rights Counsel.” Israeli police routinely commit human rights abuses against Palestinians, Israeli Arabs, Israeli Jews of North African and Arab descent, and Ethiopian Jews largely because Israel, today, is not much different than the segregationist Jim Crow-era U.S. South.

Responding to calls to end all U.S. police training with Israel, the Vermont State police; Durham, North Carolina; and Alameda County, California have halted all such programs and there are demands for other departments to follow suit.

The election of Trump as president made a bad situation involving white supremacists and neo-Nazis serving in U.S. law enforcement agencies much worse. It will take a major overhaul of law enforcement agencies from Maine to Hawaii by a future Department of Justice to even make a little headway against the rising tide of white supremacist police officers who are aided and abetted by their union leadership.