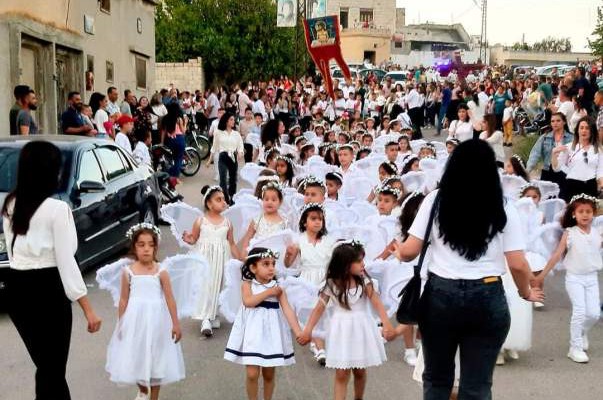 I wanted to write a more personal update. The photos I am sharing are from the Syrian Christian town of Al Sqeilbiyyeh liberated from terrorist siege and attacks in 2019. This town borders southern Idlib and is in Hama province. I have spent a lot of time with these people especially during and in the aftermath of the endless missile attacks that claimed the lives of children like these. Now, finally, after the bloodshed and sacrifice from the Syrian Arab Army and the local volunteer National Defence Forces, led by the charismatic Nabel Alabdalla, these children can take part in the Good Friday processions without fear.

Video of Nabel Alabdalla’s historic project to build a replica of Aya Sophia in Sqeilbiyyeh to honour Syrian and Russian martyrs in Syria:

You will also notice that there is not a muzzle in sight (mask). This literally makes my heart sing, children being children without the trappings of the gaslighting project sweeping the West. Children being children, humans being humans, gathering, hugging, loving and sharing. This is how life should be. These people lived in fear for their lives for 7 long years, ten years of war – a virus is not going to keep them hiding under their beds.

Yesterday, I went to a couple of administrative buildings for my work. One was a military institution – at the gate the soldier asked me to wear a mask. I informed him that I had a medical exception. He smiled politely and said “no problem” – and Syria is supposed to be ruled by a “tyrant” and a ‘tyrannical army”. Inside the offices, nobody was wearing a mask by the way.

I spent all day yesterday in some of the poorest and most crowded suburbs to the West of Damascus City. It is Ramadan here and the markets are teeming in the afternoon with people buying food for Iftar (Break fast) at 7pm. Kids hanging out of car windows, curls billowing in the breeze. Street sellers serenading the shoppers. Car repair centers toiling away in the gathering heat. Women asking the vegetable stalls for parsley to make Tabouleh. People walking past, shaking hands, old men on benches playing the Syrian version of backgammon in the shade of spring flowering Jasmine. The heady scent of Acacia blossom, the trees line the streets, their straight trunks reaching high above the buildings. The sound of car horns is constant, the not-so-gentle cacophony of life on the move.

Honestly, Covid does not overshadow life here. People are in another world – one where they fear that they cannot feed their children on a daily basis or that Israel might bomb the land surrounding their barely-built apartment block or that work is so hard to find and people cannot afford to pay them. They worry that the price of chicken is beyond their means and now they are being told that Chickens are becoming scarce in Syria. Slowly, bit by bit, sanctions and blockade and ten years of war have eroded their security, their stability and their dignity. Covid is literally the least of their worries.

I was told yesterday by a couple of military personnel that they are preparing for possible terrorist attacks in the capital leading up the elections on the 25th May. I was told to “stay awake” and to be aware of my surroundings, to report any strange vehicles or people. Measures are being put in place to secure each region of the City. At the same time, celebrations are being planned in every sector leading up to the election day.

I spoke to one senior General yesterday also. He told me that the West will do all that they can to demonize the President, to pressure the people not to vote, to cause unrest and dissatisfaction but he warned the West – “our country, Syria, will never fall for these tricks. We have endured ten years of hell to defend our way of life and our independence. You will never take this away from us.”

Syria has shunned the imperialist bloc to observe elections, including the UN. Instead they have included friendly nations, the parliaments of Russia, Algeria, Oman, Mauritania, Iran, Armenia, China, Venezuela, Cuba, Belarus, South Africa, Ecuador, Nicaragua and Bolivia will be invited to observe the elections. This is a brave and prescient move by the President, perhaps recognising the global shift away from US unipolarity and towards the non-aligned axis.

“We are all Bashar Al Assad”

Facts on the ground in Syria