HOME / Multimedia / The Ides of March: Ten Years of Bloodshed in Syria 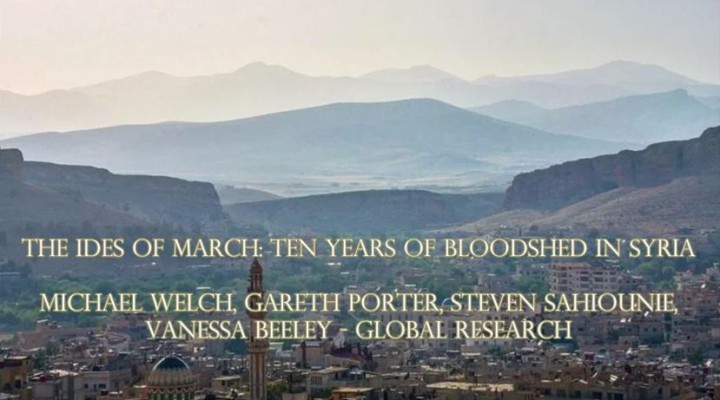 “The “protests” did not emanate from internal political cleavages as described by the mainstream media. From the very outset, they were the result of  a covert US-NATO intelligence operation geared towards triggering social chaos, with a view to eventually discrediting the Syrian government of Bashar Al Assad and destabilizing Syria as a Nation State.”

It was billed as another ‘humanitarian war.’ [1]

In Syria, according to UN numbers, over 400,000 people had died in the war in Syria. According to UNICEF, 12,000 children have died or been injured during the conflict – that’s more than three per day. Since 2011,according to the UN Refugee Agency, 5.5 million are living abroad as refugees and 6.7 million are internally displaced within Syria.

According to multiple reports throughout Western mainstream media the brutality began ten years ago, in the Southwestern Syrian town of Daraa. What started with children getting arrested for scribing anti-government propaganda evolved into protests in cities throughout the country on March 15, 2011. Reportedly, fierce crackdowns on the population left dozens of people dead on the 24th. The ‘peaceful’ demonstrations turned into an organized resistance.[2][3][4]

In 2012, the fighting erupted in cities across the country, with rebels taking hold of many regions including Al-Qusayr, Saraqeb, a section of Aleppo, Maarat Al-Numan and Douma. What apparently started as a peaceful appeal for political and economic reforms, and an action in sympathy with the ‘Arab Spring’ quickly moulted into violence for control of the nation.

Now with retaliation involving Russia, the tide has turned and the rebellion is in retreat.

There are other voices telling an unsettling tale, however. They indicate that the ‘civil war’ is in fact a foreign fueled insurgency largely indifferent to the current lot of the Syrian people. And according to the Global Research dossier Syria: NATO’s Next “Humanitarian” War, the attitude of Syrians was overwhelmingly opposed to the fight and the aims of this cause:

The majority of Syria’s population (including the opponents of  the Al Assad government) do not support the “protest movement” which is characterized by an armed insurgency. In fact quite the opposite.

Ironically, despite its authoritarian nature, there is considerable popular support for the government of President Bashar Al Assad, which is confirmed by the large pro-government rallies.

A war has been fought on Syrian soil almost as long as World War I and World War II combined. If the people of Syria support Bashar Al-Assad (at least as far as the 2014 election results indicate) then why exactly is a mountain of corpses and unrelenting echoes of wailing grief animating ten years of torment and suffering? This is among the many questions we seek answers to in the one hour broadcast of the Global Research News Hour.

Coming up first, we have statements by journalist Steven Sahiounie. He talks about the lies about the start of the war, the Free Syrian Army, and the role of Turkey in this endeavor. Acclaimed journalist Gareth Porter comments on the many ways in which the U.S. became a pivotal force of financing, arming and helping the Islamist forces attacking Syria as ‘freedom fighters.’ Finally, the renowned journalist Vanessa Beeley makes her appearance to expand on attitudes toward the Syrian president and the Syrian Arab Army, her pivotal reporting on the White Helmets as fueled and funded by the West, and the continued propaganda role of mainstream media.

Toward the end, all three guest express their attitude of where Syria is headed going into the future.

Steven Sahiounie is a journalist and commentator writing in English and Arabic. He is Syrian and living in Latakia. He specializes in Syrian affairs.

Gareth Porter is an independent investigative journalist, historian and author who has covered U.S. wars and interventions in Iraq, Pakistan, Afghanistan, Iran, Yemen and Syria since 2004 and was the 2012 winner of the Gellhorn Prize for Journalism. His most recent book is “Manufactured Crisis: The Untold Story of the Iran Nuclear Scare” (Just World Books, 2014).

Vanessa Beeley is an independent researcher, writer, photographer and peace activist. She has researched the background of the White Helmets and has been visiting Syria since July 2016. In 2017, Vanessa was a finalist for the prestigious Martha Gellhorn Prize for Journalism which was won by the much-acclaimed Robert Parry that year. In 2019, Vanessa was among recipients of the Serena Shim Award for uncompromising integrity in journalism. She currently lives in Damascus.

LISTEN TO THE SHOW

The Global Research News Hour airs every Friday at 1pm CT on CKUW 95.9FM out of the University of Winnipeg. The programme is also podcast at globalresearch.ca .

Other stations airing the show:

CJSF 90.1 FM from the Burnaby mountain campus of Simon Fraser University at 90.1 FM to most of Greater Vancouver, from Langley to Point Grey and from the North Shore to the US Border, through MP3 streaming and through a speaker located just outside the station. The show airs Thursdays at 9am local time.

CIXX 106.9 FM, broadcasting from Fanshawe College in London, Ontario. It airs Sundays at 6am.

WZBC 90.3 FM in Newton Massachusetts is Boston College Radio and broadcasts to the greater Boston area. The Global Research News Hour airs during Truth and Justice Radio which starts Sunday at 6am.

0 thoughts on “The Ides of March: Ten Years of Bloodshed in Syria”