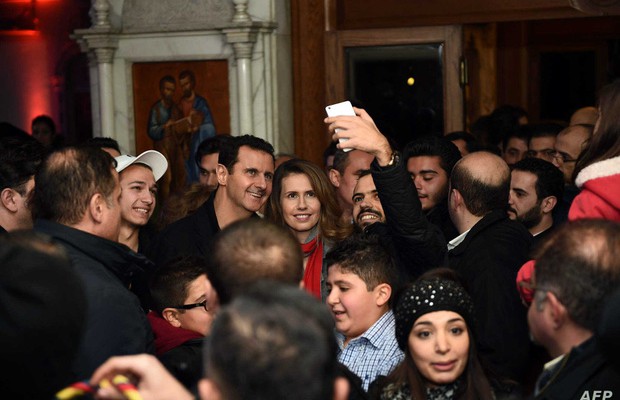 The announcement, by criminal Mike Pompeo, of sanctions on the British born family of Syria’s first lady, Asma Al Assad, is psychological warfare against those who have held this country together during the last ten years of war and devastating economic terrorism imposed upon Syria by the US supremacist alliance.

The latest sanctions target not only members of Asma Al Assad’s family in the UK ( her two brothers are doctors) but they attack the heart of the Syrian economy, the Bank of Syria. Trump’s administration will be remembered for an eclectic foreign policy with some apparent attempts to withdraw from Syria which were seemingly derailed by the deep state.

However, in my opinion, Trump was the economic sledgehammer administration – designed to reduce much of the region to a state of economic freefall, including neighbouring Lebanon – in order to continue the bi-partisan agenda of “regime change” in Syria.

Now, we have Biden and the war-relic-administration where the most ardent and bloodthirsty of the neoconservative alliance will be back in power and preying on the world. There is no difference between Presidents, or parties – they are largely irrelevant except to provide some mirage of choice in the narcissitic US. Those behind the throne are the ones pulling the strings and manufacturing chaos.

Syria has strong allies, and a stable government. This has been her saviour and her strength combined with the steadfastness of her people who have resisted the West’s vision of the dark ages for Syria’s people.

Asma Al Assad works tirelessly for her people, even during her road to recovery from cancer. I challenge any of these destructive rogue states in the West to demonstrate anything even close to the First Lady’s dedication to the betterment of society and compassion for her people. These latest sanctions are nothing more than the embodiment of evil designed to crush the spirit of the courageous people of this country. They will not succeed.

If anyone has not listened to the First Lady’s interviews, here are a selection. Asma’s candour, intellect and compassion shine through. If only we had a million Asmas this world would be a far brighter, fairer and kinder place.

August 2019 after recovery from cancer:

When I interviewed the families of martyrs in Salamiyeh this is what one husband and wife told me about their meeting with Asma:

One of the stories from #Syria that has really stayed with me is from #Salamiyah.

I visited an elderly couple who had lost two of their precious sons in the Syrian Arab Army defending their homeland. As the mother clutched the photos of her sons to her chest, she told me of the meeting she and her husband had with First Lady of Syria, Asma Al Assad.

At the end of the emotional meeting, Asma Al Assad asked the couple how many daughters they had. “Two” replied the elderly mother. “Well now you have three” Asma told them.

“I am a woman. No more and no less

I live my life as it is

and I spin my wool to wear, not

to complete Homer’s story, or his sun.

And I see what I see

though I stare every once

in a while in its shade

to sense the pulse of defeat,

and I write tomorrow

on yesterday’s sheets: there’s no sound

I love the necessary vagueness in

what a night traveler says to the absence

of birds over the slopes of speech

and above the roofs of villages

The almond blossom sends me flying

in March, from my balcony,

in longing for what the faraway says:

“Touch me and I’ll bring my horses to the water springs.”

I cry for no clear reason, and I love you

as you are, not as a strut

and from my shoulders a morning rises onto you

and falls into you, when I embrace you, a night.

But I am neither one nor the other

So be the Qyss of longing,

if you wish. As for me

not as a color photo

in the paper, or as an idea

composed in a poem amid the stags …

from the bedroom: Do not leave me

a prisoner of rhyme in the tribal nights

do not leave me to them as news …

you are who you are: you live in me

and I live in you, to and for you

I love the necessary clarity of our mutual puzzle

I am yours when I overflow the night

but I am not a land

from the moon’s feminine cycle

and my guitar falls ill

The Propaganda war on Syria

Did the BBC use a Nour Al Din Zinki supporter as researcher for Mayday series?

0 thoughts on “US sanctions the family of Syria’s First Lady -psychological warfare.”