UK Column’s Insight: China in Africa and the Middle East – a Debate 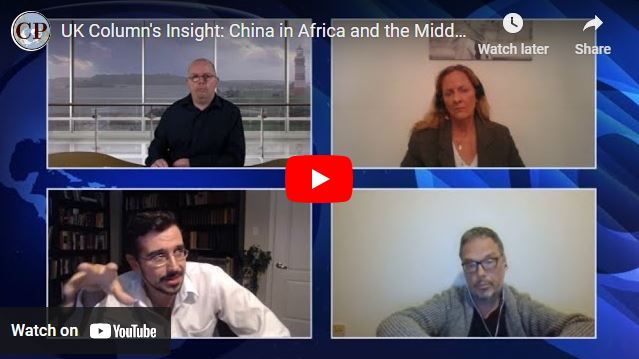 Is there an honest intention to generate prosperity and help the poor nations of the earth in opposition to a system of global enslavement, or is China just another imperial power out to loot the world?

The UK Column’s Mike Robinson speaks to Matthew Ehret, Isa Blumi and Vanessa Beeley about China’s role in Africa and the Middle East.

Matthew is a senior fellow at the American University in Moscow, editor in chief of the Canadian Patriot Review and co-founder of the Rising Tide Foundation. He has written the three-volume clash of the Two Americas and four-volume untold history of Canada series.

Isa Blumi (Department of Asian and Middle Eastern Studies, Stockholm University) researches societies in the throes of social, economic, and political transformation. He compares how European imperialist projects in the Islamic world intersected with, and were thus informed by, events within those societies. His research into such processes have resulted in numerous articles and the 8 books, including Ottoman Refugees, 1878-1939: Migration in a Post-Imperial World. (Bloomsbury Academic, 2013) and Destroying Yemen: What Chaos in Arabia tells us about the World (University of California Press, 2018).

Analysis of U.S. Strategy in Africa: Can Washington Catch up with China?

‘US Has Nothing to Offer Africa, China Does’: South African Researcher

0 thoughts on “UK Column’s Insight: China in Africa and the Middle East – a Debate”