HOME / Multimedia / Voices from the African Left: China vs the US & the New Cold War 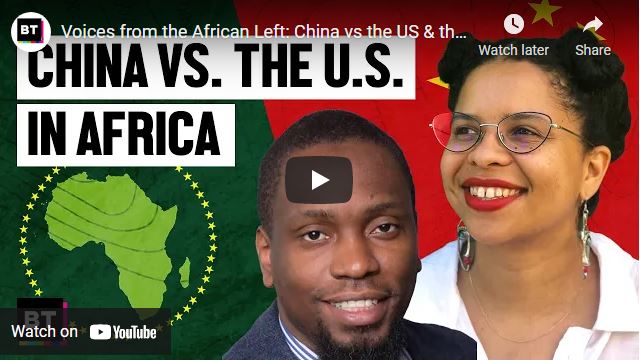 Western governments along with their loyal media and think tanks warn that China is colonizing, exploiting, and forcing Africa into a debt trap. Is this true? Or is it Cold War propaganda? What is China’s actual role in Africa and how does it compare with the West’s?

To help us understand what’s really happening, Rania Khalek was joined by two leading African leftists: Mikaela Nhondo Erskog, an educator and researcher with Pan Africanism Today, a researcher at the Tricontinental Institute, and a member of the organizing committee of No Cold War. And Kambale Musavuli, an activist, writer, and analyst with the Center for Research on the Congo.

TIME CODES:
0:00 Intro
2:46 History of colonialism and imperialism in Africa and who’s behind it
8:22 What is China actually doing in Africa?
12:24 Who’s trapping developing countries in debt? Not China!
14:44 Challenging the argument that China is exploiting Sri Lanka
20:07 US vs Chinese practices in the Democratic Republic of Congo
25:25 Western propaganda promoting anti-China sentiment on the African continent
26:34 US military expansion in Africa is meant to thwart China’s growing influence
36:08 China’s history on the African continent (ends 37:14)
37:17 America’s destabilizing role in the DRC, Mali, Guinea and more.
46:17 US vs Chinese activities in Ghana
52:04 Is China building any military capacity in Africa?
54:30 How the US military took over an entire terminal in Ghana’s airport
57:33 French electricity powered by uranium in electricity deprived Niger
1:02:58 Is US propaganda against the Belt and Road Initiative effective in Africa?
1:11:37 Is a multipolar world better for the global south?
1:15:30 Covid in Africa: US vs Chinese response
1:24:10 Anti-China hysteria drummed up by African elites backed by the West

“Capitalism in Africa has failed”: Meet the Socialist Running for President of Zambia

0 thoughts on “Voices from the African Left: China vs the US & the New Cold War”